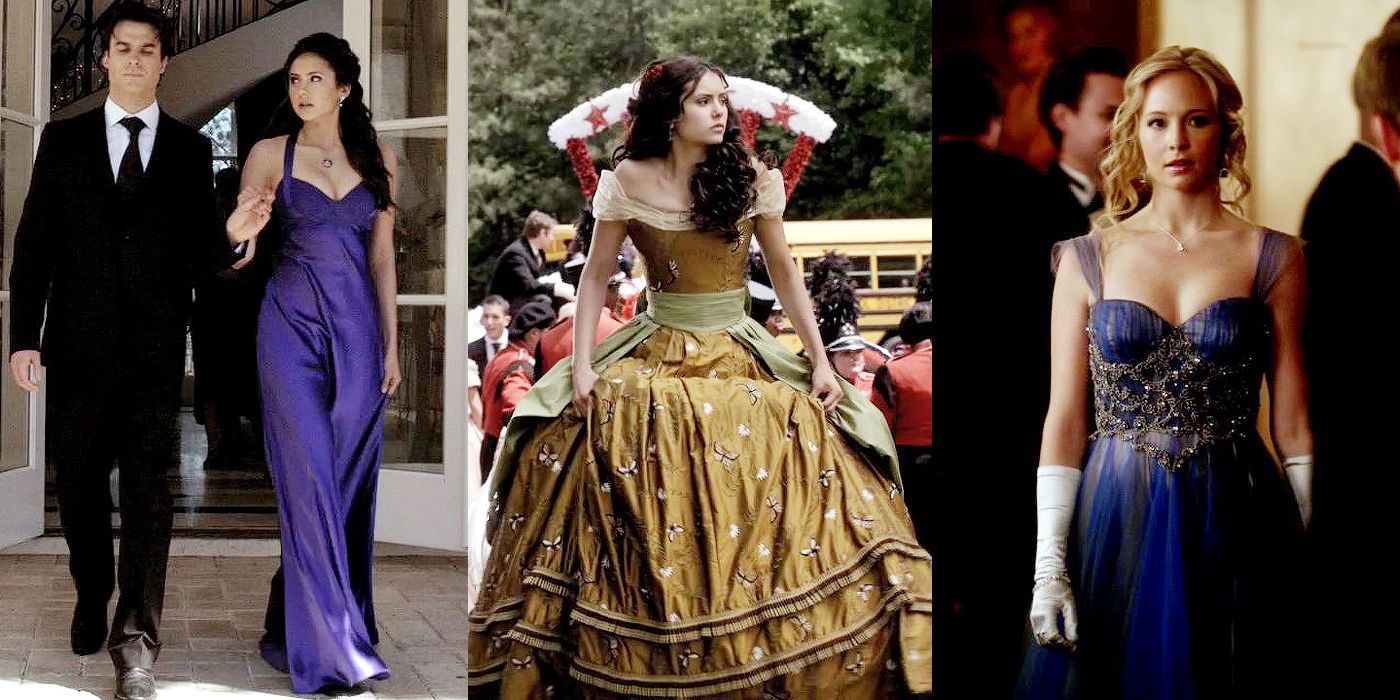 With Legacies being canceled by CW recently, The Vampire Diaries franchise says goodbye to TV screens for good it seems. No spin-offs have been planned, and since the show premiered in 2009, it has been a staple of television in a way that not many other franchises can boast.

The series always paid special attention to details like fashion, and many of the show’s biggest moments were also marked by the gowns and dresses the characters were wearing. Some of them were quite iconic and memorable in the eyes of fans.

Rebekah had some of the best looks on the show. Apparently, when one is old long enough, they acquire a great taste in fashion. This was one of the best looks overall, especially since the dress embodies everything great about the ’20s. It has movement with all the embellishments, sparkles, and pearls making it dynamic rather than dull.

RELATED: 10 Things Fans Love About The Vampire Diaries, According To Reddit

The color emphasizes the creamy tone of her skin, and the added pearl necklace adds just the right amount of class. Sadly, the bottom part of the dress isn’t clearly shown on the show, but if the top is anything to go by, the entire dress is beautiful.

Bonnie, unfortunately, played the second chair when it came to fashion because it was usually Elena and Caroline who shone the brightest. And even in this episode, Caroline’s dress is wonderfully elegant and the tone compliments her skin tone, but Bonnie’s dress is the star.

The dress itself is flattering to her figure, and the dark rich green shade adds a sliver of mystique, along with the gorgeous necklace she’s wearing. It was the dress that made her stand out, as opposed to her usually blending into the crowd.

See also  FFXIV: How to Use Materia

It’s impossible not to put this Theia gown among the best. It was an iconic dress from the moment Elena stole it from Caroline. The color actually worked perfectly for Elena as it accentuated her dark features.

As per tradition, Damon got her a corsage to go with the dress, and it looked perfect for prom. The silhouette of this silk organza gown was flattering and the sweetheart neckline created a nice decolletage. The flowy fabric and the different hues of pink in the print give the dress lots of motion.

When Damon joked about bridesmaid dresses making you look like a freak of nature, he wasn’t wrong because they often can. But as Elena wittily replied, Jo went easy on her. This purple dress is exquisite as the dark lilac mauve color is soft enough that it’s not too much, but it doesn’t wash Elena out.

The fact that this was the dress Elena wore during her final goodbye to the show makes it that much more iconic. She might not have been the star of the day, since it was Jo’s wedding, but the dress was beautiful and it was the one she wore when she shared her final dance with Damon, which was one of the most important episodes for them.

Many of Katherine’s gowns, especially ones from flashbacks, are pretty iconic on the show. But none more iconic than the one she wore when Stefan met her the first time. The period gown is stunning, and the soft pastel colors of the fabric make Katherine seem almost angelic.

Katherine was a queen of fashion, always looking perfectly in place, and even mocking Elena for her safe choices in clothes. But in this scene, she was the epitome of a lady, even though the lady had a mean side.

After Elena with her humanity turned off steals Caroline’s prom dress, she begs Klaus to find her something epic in his collection of antiques and he doesn’t disappoint. This mermaid-style dress is embroidered with sparkles and pearls and the ivory color makes Caroline’s skin look radiant.

RELATED: 10 The Vampire Diaries Plot Twists Nobody Talks About

It’s something straight out of an old Hollywood movie premiere – a classic and elegant look for Caroline to outshine Elena. And she totally did.

This was the gown that Elena wore to the Founders’ Day Parade, and the resemblance to Katherine was uncanny. It even shook the Salvatore brothers when they saw her. It’s a full skirt with detailed embroidery on the bodice and skirt, complete with short sleeves.

It’s a dress that serves to emphasize Nina Dobrev’s beauty, but not overshadow it. Aside from the dull color, which doesn’t really go well with her skin tone, it’s a beautiful dress, and it’s definitely an iconic one.

Elena was given her own breathtaking moment when entering the Mikaelson ball, wearing this strapless sequin ballgown with a full skirt. It was lavish and sparky and almost decadent, and it had all eyes on her the moment she walked in through the door. Elena changed in many ways through the seasons and as she became more confident, so did her fashion choices.

They did this dress justice with a dance they did, and it was even more beautiful in motion. Nina Dobrev wore this with grace and poise and made it even more spectacular. It was arguably her most beautiful dress on the show.

Klaus and Caroline had a complicated relationship. Despite him being the most powerful vampire hybrid, when she asked for help, he always delivered. He gifted her this dress, which really does embody genuine beauty. The blue color is bold, but the tulle fabric softens it up, and Caroline could have easily come from a period movie in this scene.

The white mixing in with the blue is almost reminiscent of a night sky. It compliments her skin tone but doesn’t wash her out. It’s also the dress Hope wore on Legacies, unknowing that it was the dress her father gave to Caroline.

This is likely the most recognizable and memorable dress from The Vampire Diaries. It was the moment the direction of the show shifted, if ever so slightly. Up until that point, Elena never showed obvious attraction to Damon, at least not in this way.

The Miss Mystic Falls dance was something she did to honor her late mother, and the blue color suited her to perfection. The flowy, silky fabric accentuated her body in all the right places, and the strong blue color added contrast to the scene. It was a perfect choice on behalf of the costume department – a classic, yet simple dress that allowed her natural beauty to shine.

NEXT: 10 Best The Vampire Diaries Flashback Episodes, Ranked By IMDb

Will there be a ‘Schitt’s Creek’ movie? Here’s what Sarah Levy...