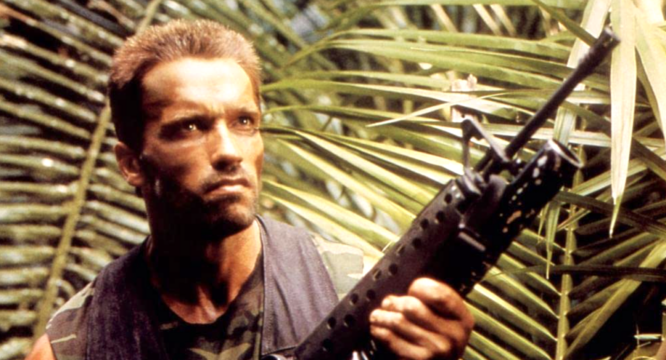 Arnold Schwarzenegger is one of the most famous actors in modern cinema. With dozens of movies under his belt, many of which are considered classics, there’s something for everyone to enjoy, including comedies, thrillers, and dramas. However, while Arnie has found his acting niche, he is best known for his Austrian-accented dialogue that makes for comedy gold. The lines range from funny and cheeky to downright awesome, and he delivers each with confidence. Pick your favorite quotes from this list and drop them casually in conversation because someone is sure to pick up on your great taste in movies.

Constantly busy at his job as a mattress salesman and disappointed in himself for neglecting his son, Howard Langston is determined to make it up by getting Jamie a Turbo Man action figure for Christmas. So, on Christmas Eve, he travels all over town to find the figurine and heads towards the Wintertainment Parade, which features Turbo Man in the flesh.

This hilarious line is in reference to a scene in which Howard calls home to check in on his family. When his neighbor, Ted, answers the phone while enjoying Howard’s wife’s cookies in a suggestive manner, Howard is enraged and yells at Ted, “Put that cookie down, now!” Arnold’s over-the-top acting makes this line memorable and a fantastic way to tease any cookie monster friends you might have.

9. “Consider that a divorce.” – Total Recall

Douglas Quaid wanted what we all want — to have virtual memories of a pseudo-vacation on Mars implanted in his mind. Instead, it triggered actual memories of him being a secret agent in a fight against the wicked Mars administrator, Cohaagen. He discovers that his entire life is a false memory planted in his brain and that the people who replaced his memories now want him dead. The answers that Quaid is searching for can only be found on Mars. There he gets involved in a coup against an evil regime. All in a day’s work when you’re Arnold.

The line that Arnold delivers is during a scene in which Quaid fights with his fake wife, Lori (Sharon Stone), who was placed with him to solidify the lie that was his life. After Lori tries to appeal to Quaid’s humanity, she goes for her gun, and Quaid shoots her in the head, killing her. If that’s not grounds for divorce, what is?

Batman and Robin work together to defeat the villains of Gotham City. In this movie, they battle the seductive Poison Ivy and the notorious Mr. Freeze. When Freeze and Ivy start working together to turn Gotham to ice, the Dynamic Duo must put aside their underlying tension and stop the heinous plot.

The film features a plethora of memorable quotes by Arnold as Mr. Freeze, most being ice-related, like, “What killed the dinosaurs? The Ice Age!” as well as, “Always winterize your pipes.” Perhaps the most memorable is Arnold shouting, “Let’s kick some ice!”

In this family-friendly role, Arnold plays police officer John Kimble who goes undercover as a teacher. Watching him interact with kindergarteners makes for some pretty hilarious content. For instance, after Kimble complains of the kids giving him a headache, one of them suggests that it could be a tumor, to which he replies, “It’s not a tumor!”

When a team of operatives ventures into the Central American jungle, they’re hunted by an extraterrestrial being. Led by Dutch, played by Arnold, they attempt to rescue potential survivors of a downed helicopter. However, after they land, the team discovers that their mission isn’t all it’s cracked up to be. Soon they find themselves the prey of a ruthless alien hunter. The team is eliminated one by one until only Dutch remains.

The quote refers to the Predator and the hopes that if it bleeds, the commandos can kill it.

John Matrix is a retired Special Forces colonel who left the fighting to live a secluded life with his daughter, Jenny. However, when Jenny is kidnapped by those hellbent on revenge against Matrix, he must come out of retirement to save her.

In an altercation, Cooke (Bill Duke) says to Matrix, “You scared, motherf*cker? Well, you should be because this green beret is going to kick your big ass,” to which Matrix replies, “I eat green berets for breakfast, and right now, I’m very hungry.”

4. “To crush your enemies, see them driven before you, and to hear the lamentation of their women.” – Conan the Barbarian

As a young boy, Conan was enslaved after his parents were murdered and his village massacred by a vicious warlord, Thulsa Doom (James Earl Jones). He then grows up to be a fearsome fighter and plots his revenge.

One of Arnold’s earliest feature films and very light on dialogue, the line stands out. Conan is asked what he thinks is best in life. He responds with conviction, “To crush your enemies, see them driven before you, and to hear the lamentation of their women.”

Pronounced by Arnie as, “Get to da choppa!,” this is another of the many memorable quotes from Predator. During a particularly dire situation in which the Predator has wiped out half his squad, Dutch, commands Anna, “Get to the chopper!”

In this sequel to the original (and quotable) The Terminator, 10 years have passed since the first T-800 was sent back in time to kill Sarah Connor and, by proxy, her unborn son, John. After Sarah survived, John, now a young boy, teams up with another, identical T-800. This time he must fend off an advanced Terminator, the T-1000, who is sent back in time to assassinate John. Luckily, Arnold is on his side, and its mission is to save John rather than kill him.

A significant part of the movie is the relationship that blossoms between John and The Terminator. This includes John attempting to teach his robot protector cool catchphrases he can use while destroying foes, such as “Hasta la vista, baby!”

Kyle Reese, a soldier from a post-apocalyptic world where machines have destroyed humanity, is sent into the past to protect Sarah Connor, the future mother of the man who will save the world. But a formidable enemy has been sent back as well – The Terminator, a murderous cyborg who intends to end the life of Connor’s child before it begins. Together, Sarah Connor and Kyle Reese must evade The Terminator and save the world.

The catchphrase has been used in many of Arnold’s movies, including The Running Man, Commando, and Total Recall. However, it is most associated with the Terminator franchise, and rightfully so, as in this movie, it’s delivered with such finesse by Arnold as to make it one of the most well-known movie quotes of all time.

“You Really Make Me Feel Like a Piece of Sh**”: Arnold Schwarzenegger’s Co-Host Logan...

‘Gutfeld!’ on if Kamala Harris could be president

Arnold Schwarzenegger’s Son Joseph Baena Gets Candid About Being Bullied As...