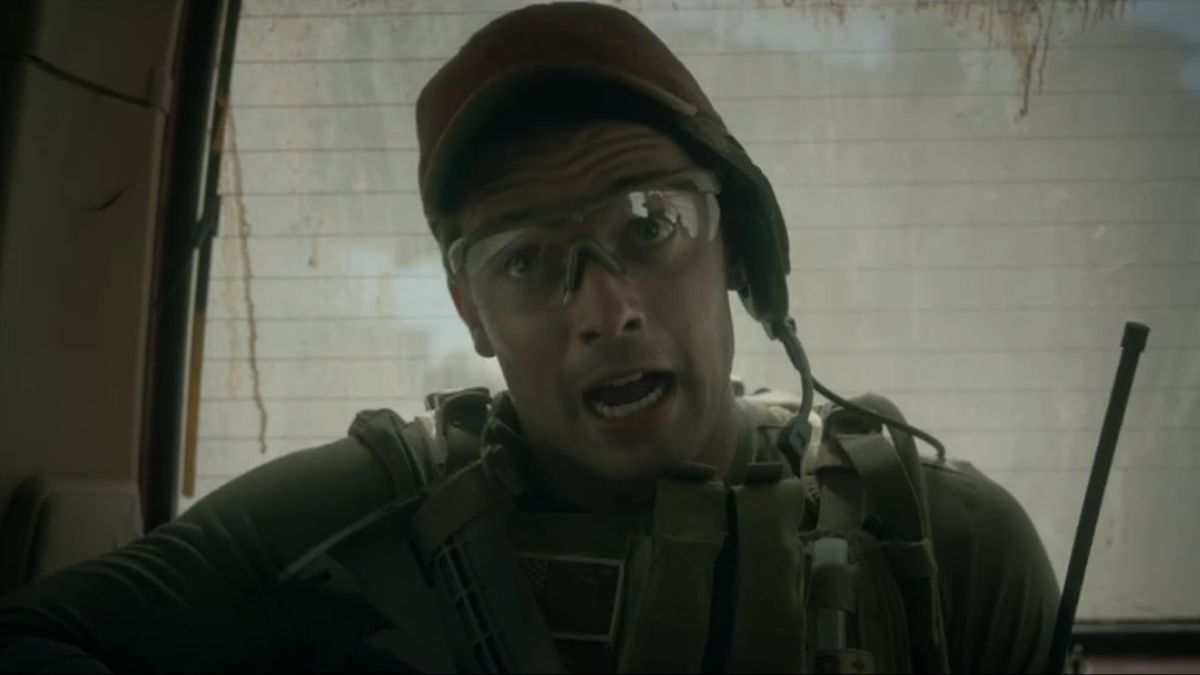 Some people would take a bullet for their jobs, and while The Terminal List’s Patrick Schwarzenegger didn’t have to pull off that exact feat, he did something pretty close. While filming the Amazon Prime show, the young actor got to do something called a “brass dance.” It’s a term most are unfamiliar with, and Schwarzenegger learned exactly what it was the hard way.

Funnily enough, the story was started by one of his co-stars, Tyner Rushing. As I spoke with Rushing and Schwarzenegger, alongside Riley Keough, the subject of realism in The Terminal List came up. During our conversation on the press day for the Chris Pratt-led series, our talk about getting real inspired Patrick Schwarzenegger and Tyner Rushing to tell CinemaBlend that brass dance story:

Tyner Rushing: “As far as realism on the day, I was remembering, I chuckled when you were talking, Patrick. Do you remember when that shell went down your [shirt]?”

Patrick Schwarzenegger: “Oh yeah. I still have a scar on my chest.”

Rushing: “He got burnt by a [shell casing].”

Schwarzenegger: “Yeah, that’s right. That hurt, it was hot. They were all cracking up, because I think they call that a ‘brass dance’ or something?”

Schwarzenegger: “Yeah, a shell would get stuck inside your armor, or in your clothes. It’s so hot from coming out of the gun.”

To my knowledge, we don’t get to see this moment in the eight-episode run that adapts author Jack Carr’s novel of the same name. Then again, the pacing of the action and investigation surrounding a potential military conspiracy rarely ever lets up. With all of that speed and adrenaline pushing things forward, a moment such as this could be missed amidst what we’re shown.

Meanwhile, on the set of the show itself, Patrick Schwarzenegger’s co-stars certainly noticed his big brass dance. Not only was Chris Pratt rather amused by his brother-in-law’s mishap, but so were others like actual trained SEAL Jared Shaw. As both men play his squad mates on The Terminal List (opens in new tab), the battle scene in question led to what some could consider a slightly embarrassing turn to the story.

Accentuated by a comment from co-star Riley Keogh, here’s how Patrick Schwarzenegger’s story in realism and hot brass concluded:

Riley Keough: “Then you have all the little actors going, ‘Oh no.’”

Patrick Schwarzenegger: “Exactly. You could tell who the SEALs were and who the actor was, because I was screaming, Jared was cracking up, and all of them were laughing.”

Tyner Rushing: “They call it a dance because you’re hopping around, because it burns?”

Schwarzenegger: “Yeah, exactly. You see me hopping across the screen like, ‘Aaaah!’ … Chris was also cracking up.”

You can practically imagine a random family dinner where Patrick Schwarzenegger had to talk to his father Arnold about that time he did a “brass dance,” with brother-in-law Chris Pratt filling in the details he’s left out. Though one could equally imagine Arnold Schwarzenegger being proud of his son for engaging in this trial by fiery bullet casing.

One thing’s for sure – Patrick Schwarzenegger’s next gig has already started to turn heads in its own right. Of course, it’s for totally different reasons, as Schwarzenegger’s role in The Boys Presents: Varsity is as explicit as you’d think. The details have gotten the attention of Arnold Schwarzenegger, as it doesn’t sound like brass is involved in the dance this new series requires.

Chris Pratt’s Zero Dark Thirty experience helped him secure The Terminal List as a project that was bound to be as realistic an experience as possible. While Patrick Schwarzenegger might not have been looking to go as real as taking a heated shell casing to the chest, the results of his training do show in the finished product. You can currently catch The Terminal List, as all eight episodes are now streaming for Amazon Prime subscribers.