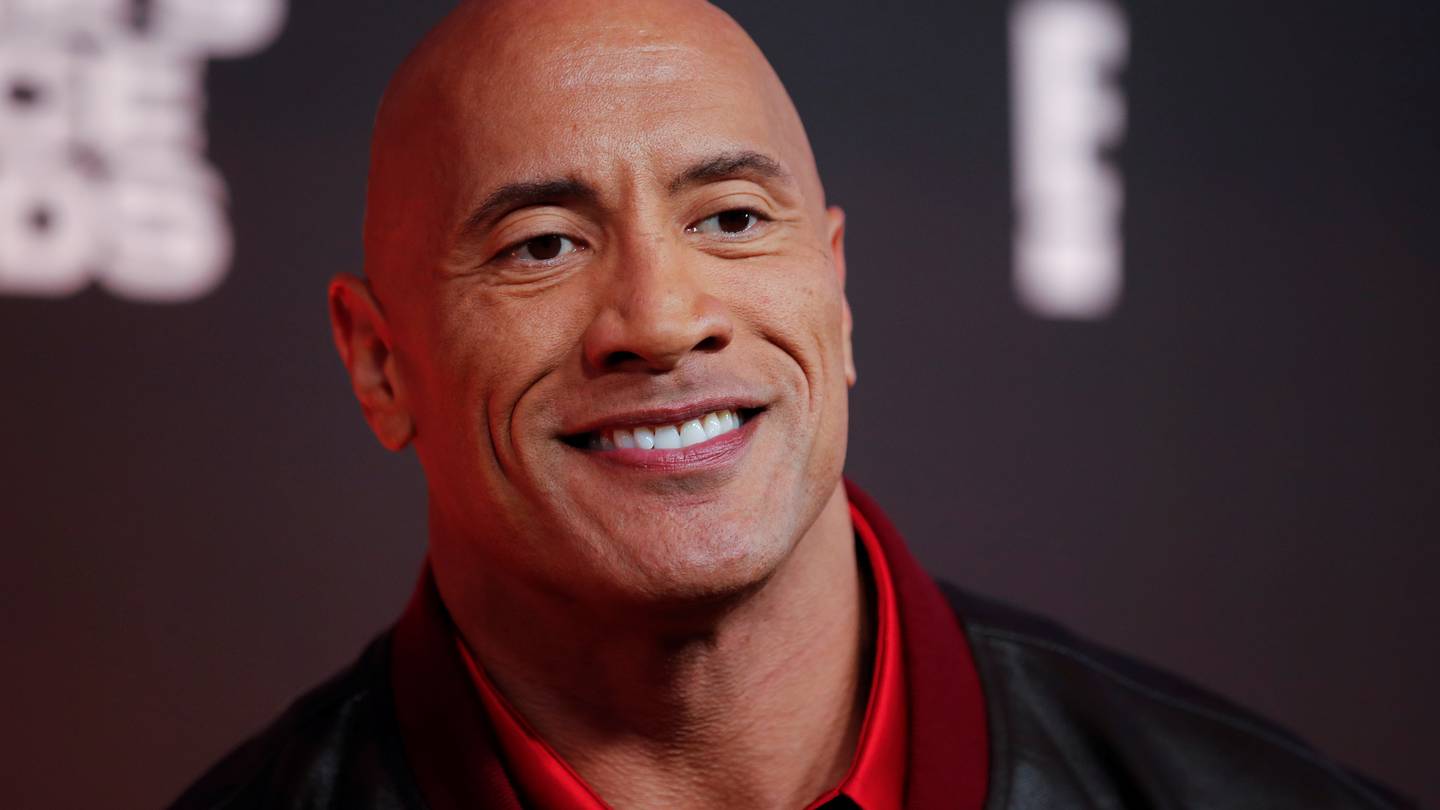 Dwayne “The Rock” Johnson is the top-earning actor on Forbes’ list of highest-paid entertainers in 2022, coming in at number four with an estimated annual salary of $270 million.

Johnson’s annual earnings were boosted by big paydays for the movies Black Adam and Red Notice. The actor’s box-office bankability sees him command an average of more than $20m per movie.

This year’s list is dominated by stars profiting from the sale of creative properties. About half of the top 25 earners, including Lord of the Rings director Peter Jackson (at number 1, with $580m) and rocker Bruce Springsteen (number 2, $435m), made the list by selling all or part of their music catalogues or studios.

Rounding out the top five are Jay-Z, who was ranked third with $340m, and Kanye West in fifth place with $235m.

Franchise favourite Johnson, 49, has a net worth of $800m, according to wealth tracking website Celebrity Net Worth. A former WWE wrestler, he is one of the highest-paid actors on the planet, taking home an estimated $100m from film and endorsement earnings in a typical year.

The Fast and Furious actor’s films have grossed more than $10.5 billion worldwide. He has also been associated with brands such as Ford and Apple.

But he’s also an astute businessman. The near-$1bn estimate of the actor’s net worth includes his stake in the disruptive Teremana beverage brand he founded in 2020 with co-owners and business partners Ken Austin, Jenna Fagnan, Dany Garcia and the Lopez family from Jalisco, Mexico. Ms Garcia is Johnson’s former spouse.

Johnson is thought to own between 30 per cent and 40 per cent of the brand, which could be conservatively valued at about $2bn based on a recent interview the actor gave to CNN, accounting for the biggest portion of his wealth. His goal this year is to make the beverage “a truly international brand”.

From the Baywatch movie to last year’s Red Notice, the company has taken more than $2.7bn in box-office sales. The figure does not include revenue from productions for other mediums, such as NBC’s television programme Young Rock.

Once an aspiring professional footballer, Johnson and Ms Garcia teamed up with Redbird Capital to rescue the XFL professional American football league from bankruptcy court and paid $15m for the franchise.

Last week, he announced a collaboration between the XFL and National Football League. The XFL will now serve as a testing ground for new technology and rule changes for the NFL, possibly in return for financial and industry endorsements.

“I love creating products and brands that have a certain quality to them to deliver to people. But I think the stripped-away answer here is: I love it. I love what I do. Honestly, I love building from scratch with these two old dinosaur hands.”

Indian celebrity couple Virat Kohli and Anuskha Sharma are the latest stars to endorse plant-based meats. In February, they joined Mumbai brand Blue Tribe as investors and brand ambassadors for an undisclosed amount.

The brand retails a wide range of fake meat products, including plant-based mincemeat, sausages and pre-packaged momos. It is one of several start-ups in a sector valued at between $30m and $40m, largely driven by consumer-packaged foods.

“Virat and I have always been animal lovers. It has been years since we decided to adopt a meat-free lifestyle. The collaboration with Blue Tribe is a step to tell people how they can be more conscious and leave less impact on the planet by switching to a plant-based diet,” Sharma said.

Kohli is estimated to have a net worth of between $86m and $120m, thanks to his earnings from cricket, as well as investments in India and abroad. Sharma’s net worth is estimated to be about $34m, according to Indian media.

Aside from brand endorsements and her movie work, she is a producer, in addition to being one of India’s most sought-after actresses. Sharma also owns Nush, a fashion brand that she launched in 2017.

See also  What is Wilfred Frost's net worth?

The couple’s joint investments include a $295,000 investment in Pune-based insurance start-up Digit. In 2020, the pair bought a 0.25 per cent stake in the company as part of a $84m fund-raising round that valued the three-year-old start-up at $870m, the Economic Times reported.

He famously trolled Norway’s electric cars, but Will Ferrell is now cashing in on Scandinavian advanced technology. This month, the Hollywood actor accepted a double role at Danish challenger bank Lunar, which also operates in Sweden and Norway. He is the bank’s newest investor and also the face of a large advertising campaign.

The announcement was made alongside a 30-second video posted to LinkedIn. In the video, inspired by a 1990s Swedish commercial for Postbanken, Ferrell plays a life coach and money guru.

Lunar was launched in 2015 and received its banking license in 2019. The mobile-based banking app has more than 400,000 customers and has raised a total of €345m ($387.7m) in capital from investors. Following a series D funding round worth €210m last summer, Lunar is now valued in excess of €1bn.

The bank is now focused on growing customers in Sweden, it said.

The size of Ferrell’s investment was not disclosed. The Anchorman star will help to develop the company’s public profile and brand.

“I am happy to now be a part of the work Lunar does to give consumers and companies more power over their money. By joining Lunar, I am expanding my commitment to the Nordic countries, which are close to my heart,” Ferrell said.

“Nordic people are smart, sexy and are tired of having their money messed with. That’s where Lunar comes into play as a digital disrupter in the financial industry.”

The actor and comedian, 54, is estimated to have a net worth of $160m, according to Celebrity Net Worth.

A significant part of Ferrell’s fortune comes from acting fees, including back-end participation profits. At the peak of his career in the early 2000s, he was one of Hollywood’s highest-paid stars, earning a $20m salary for movies such as Bewitched, Kicking & Screaming, Talladega Nights and Semi-Pro.

Ferrell is also part-owner of the Los Angeles FC football team, a purchase he made in 2016.

Together with comedy partner Adam McKay, he founded the video website Funny Or Die in 2007. It was acquired for an undisclosed sum last year by designer, activist and Democractic fund-raiser Henry R. Munoz III, who bought it from former stakeholders including AMC Networks, WarnerMedia’s Turner and Sequoia Capital.

Ferrell stayed on in an advisory capacity, according to Variety. When the site was first evaluated for sale in 2014, its owners were reportedly seeking between $100m and $300m, according to Bloomberg.

Ferrell and McKay have also co-produced several television shows for HBO, including Eastbound & Down and Succession.

Controversies can be good public relations, but what should they cost? Streaming platform Spotify reportedly paid podcast host Joe Rogan more than $200m for a contract spanning three and a half years, the New York Times reported last week.

That is double the original estimate of a $100m paycheque when the deal for his The Joe Rogan Experience podcast was announced about two years ago.

In recent weeks, Rogan, 54, has been at the centre of several controversies. He has been criticised by Spotify users and artists over his use of racist language in past episodes of his show, as well as accused of spreading misinformation about Covid-19 vaccines, leading to a number of musicians, including Neil Young, pulling their music from the streaming service.

The American comedian, martial arts expert and Ultimate Fighting Championship commentator has a net worth of $120m, according to estimates. After hosting the TV shows News Radio, Fear Factor and The Man Show, Rogan is now considered one of the most financially successful podcasters in the world.

Andrew Wilkinson, chief executive of internet investment company Tiny Capital told The Sun this week that Rogan’s self-reported 200 million podcast downloads per month could result the host making up to $240m a year in advertising revenue and could lead to him being the first billionaire podcaster.