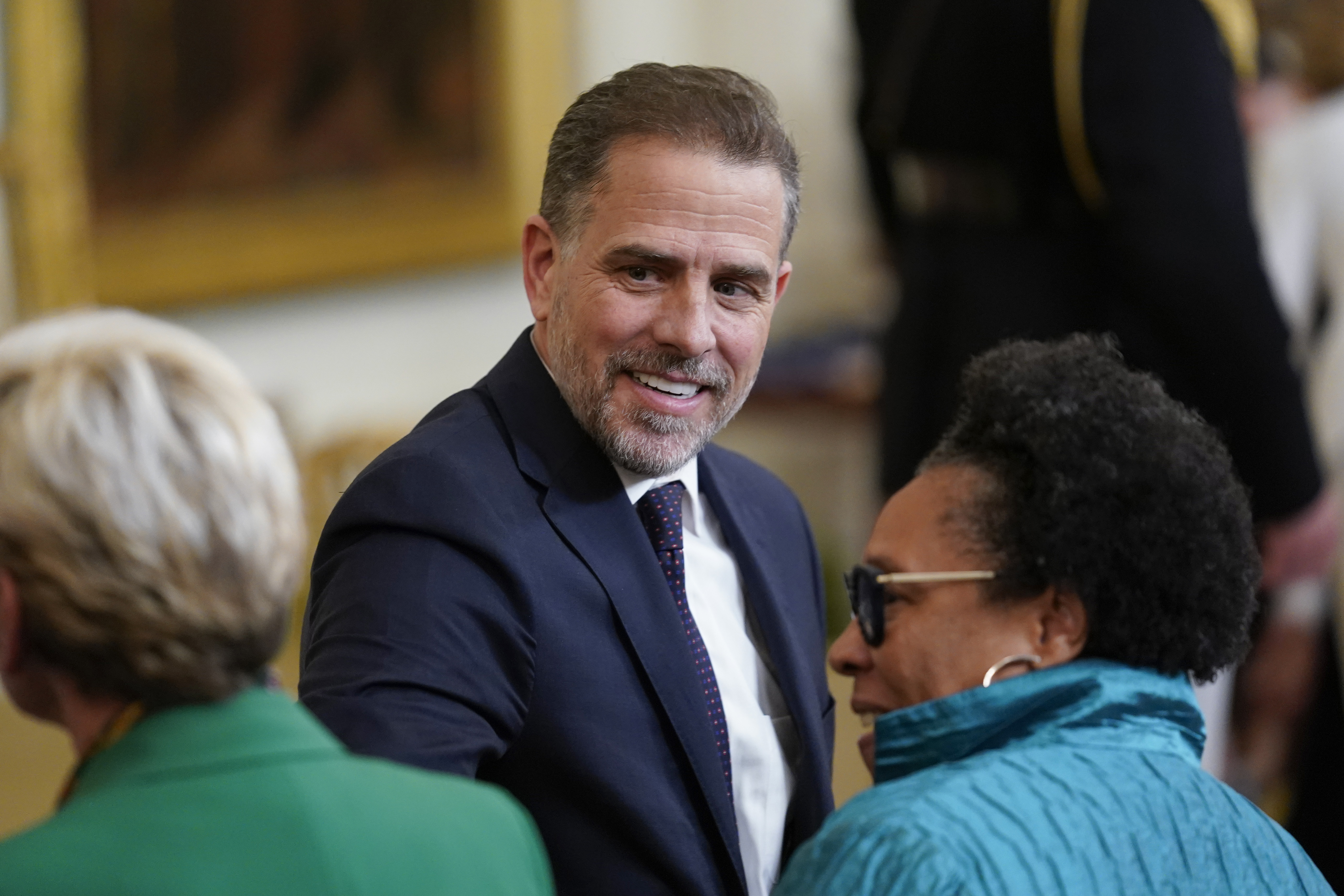 The screening was followed by a trivia game about the film where the prizes for the 70 or so guests included a hefty-sized bong and Parmesan cheese. Both are references to Hunter Biden’s drug abuse, including his frank admission that he was so addicted to crack cocaine that he tried smoking everyone’s favorite spaghetti topping.

A representative promoting the film said beforehand that Oscar winner Jon Voight was set to attend, but he did not make it. The highest profile actors were Dean Cain, best known for playing Superman in “Lois & Clark: The New Adventures of Superman,” and Nick Searcy. Consider it the MAGA set for the movie industry. Searcy is a star of the show “Justified” who also recently produced a documentary on Jan. 6 called “Capitol Punishment.” Cain has played former FBI agent Peter Strzok in a stage play called “FBI Lovebirds” that was produced by one of the people behind “My Son Hunter,” Phelim McAleer.

While the scene may not have been as glamorous as across town, it is part of a growing effort among some conservative groups to find a firmer footprint in the film industry as a counterculture to what they see as Hollywood’s liberal agenda. The Daily Wire has released three feature films online this year, and “My Son Hunter” is Breitbart’s first effort in producing a dramatization. Producers hope the film will have a wider reach and impact. When explaining the impetus behind it, director Robert Davi has frequently invoked the line from the late Andrew Breitbart, founder of the eponymous website: Politics is downstream from culture.

Beyond that, “My Son Hunter” is also the latest example of the ever-growing conservative business built around the president’s son and — more specifically — the laptop hard drive he allegedly left behind at a repair shop.

The Hunter Biden industrial complex is in boom times with little sign of a recession. Conservative groups frequently fundraise off of him. Fox Nation has a four-part docu-series on him hosted by Jeanine Pirro. There is ample Hunter Biden merchandise too. T-shirts, mugs, laptop stickers, sweatshirts, hats, and even a doll in online shops on Etsy, Redbubble, Amazon, Zazzle and more. Many of them include lurid photos from the hard drive that have been published by outlets but not independently verified by POLITICO. Some counter Hunter Biden fan pages have cropped up on the left, but without the same reach.

“My Son Hunter” is the most ambitious Hunter Biden project to date. The film was financed by $2.5 million in crowdfunding, according to McAleer. It features experienced performers, including British actor Laurence Fox and “The Mandalorian” actress Gina Carano — both known for being outspoken conservatives — along with John James, who is best known for his role in “Dynasty.”

Fox, a skeptic of the Covid vaccine who ran a failed campaign for the mayor of London last year, said that he prepared for the role by listening to Hunter Biden’s audio narration of his memoir, “Beautiful Things.”

“It’s amazing how compelling he is and how you start to kind of fall down the rabbit hole of any individual’s personal narrative as they explain it to you,” Fox said. “Mainly I just wanted to go: he’s vulnerable. That was the main thing.”

The crew filmed in Serbia because of its relatively low cost, scenery that could resemble Ukraine, and, according to McAleer, the ability to cast in a way to help depict Hunter’s lifestyle. “To accurately depict Hunter Biden’s life, you need strip bars and a lot of beautiful women. Serbia has a lot of both,” McAleer explained. They built a re-creation of a suite at the Chateau Marmont — where Hunter Biden stayed for long periods of time — in an abandoned sugar factory.

The movie largely follows a liberal activist and stripper named Grace who spends a night with Hunter Biden and gradually becomes disillusioned as she learns more about the Biden family. Joe Biden, played by John James (who also suffered a head injury while filming), is depicted as both bumbling and the savvy corrupt head of a crime family undermining America.

Some sketches of the Bidens are well-researched — taken from both their memoirs and reports derived from the hard drive — while other sections are sloppy. In one scene, Beau Biden’s widow, Hallie, is repeatedly called “Hailey.”

At the movie’s climax, Grace also tells a freelance reporter who writes for an outlet simply named “The Post” that she has Hunter Biden’s confession on tape that “Joe gets a percentage cut of the deals and he influences foreign policy decisions in favor of those companies and governments.” While Hunter Biden did earn millions making deals with foreign companies aligned with China and Ukraine, there has been no direct evidence that his father ever personally profited from that work or steered foreign policy decisions to benefit those companies.

Besides the Biden family, the movie’s other villain is the mainstream media and social media companies. The film ends in October 2020 when Facebook and Twitter block or suppress the original stories about the laptop — actions that have fueled the belief on the right that the election wasn’t fair (there is no evidence of voter fraud widespread enough to have changed the outcome of the election, despite numerous investigations into the matter). It captures some elements of the moment but also contains some flourish. After Grace tells the reporter what she’s found, the reporter quickly rejects the story because “we have the chance to take down a fascist dictator” and no newsroom will take “your Russian disinformation.”

Davi, the director, said last month in a virtual panel about the movie that included Donald Trump Jr., that the media “is a third arm of a Marxist-communist revolution in America.”

And therein lies the core difference between conservative film and the Hollywood offerings. Budgets may be vastly different. But the producers of the former don’t try to hide their agenda behind art. Their agenda is the art.

McAleer, for one, is a true believer that Hunter Biden is corrupt and has been used by his father to enrich himself and the family with ethically-dubious business deals. In April 2021, he rowed a kayak to the backside of the Biden son’s Venice residence with a bullhorn and asked him questions about documents reportedly from the laptop.

It all may seem like fodder for the conservative media ecosystem. But it’s been serious enough to catch the attention of Hunter Biden’s associates. On Oct. 31, 2021, three Hollywood producers including Kevin Morris — a lawyer for and close confidante of the younger Biden — traveled to Serbia and obtained extensive access to the set. They did so by claiming to be working on a Hunter documentary.

“Stylistically, it would be great to do these interviews informally on set during gaps in production,” Robb Bindler, a documentary filmmaker, wrote to McAleer in an email shared with POLITICO. In a separate note to Fox, who was playing Hunter Biden in the film, Bindler wrote: “I’m a dedicated filmmaker and want to give you a voice in the film. Was on the way to Kyiv (aka Burisma!) but stopping in Belgrade and can come by as soon as you say is cool.”

At the time, Morris did not identify himself as a lawyer or confidante of Hunter Biden. And his presence on the set wasn’t reported until this past spring when his association with the president’s son became public. It’s possible that the Hunter-allied filmmakers are indeed planning to use the footage from the set of “My Son Hunter” for a documentary. The New York Times reported in May that Morris is funding a “documentary project” surrounding Hunter Biden. Morris and Bindler declined to comment.

McAleer, for his part, didn’t try to downplay the episode. He told POLITICO that the filmmakers stayed for several days and “never left the set and had the camera constantly running.” In short: they got what they wanted.

That included spending time with Fox as he got into character. “I think he’s an incredibly intelligent man, who is incredibly troubled,” Fox said of Hunter Biden. “And when you’re very smart, and you’re very troubled, you tend to cause a lot of chaos in the world.”

Ruben Randall - January 9, 2023 0
Actor
tvN’s “Navillera” has revealed stills of Seo In Guk from the upcoming episode! Based on a popular webtoon of the same name, “Navillera”...

The best concerts and music festivals happening this summer: Get your...