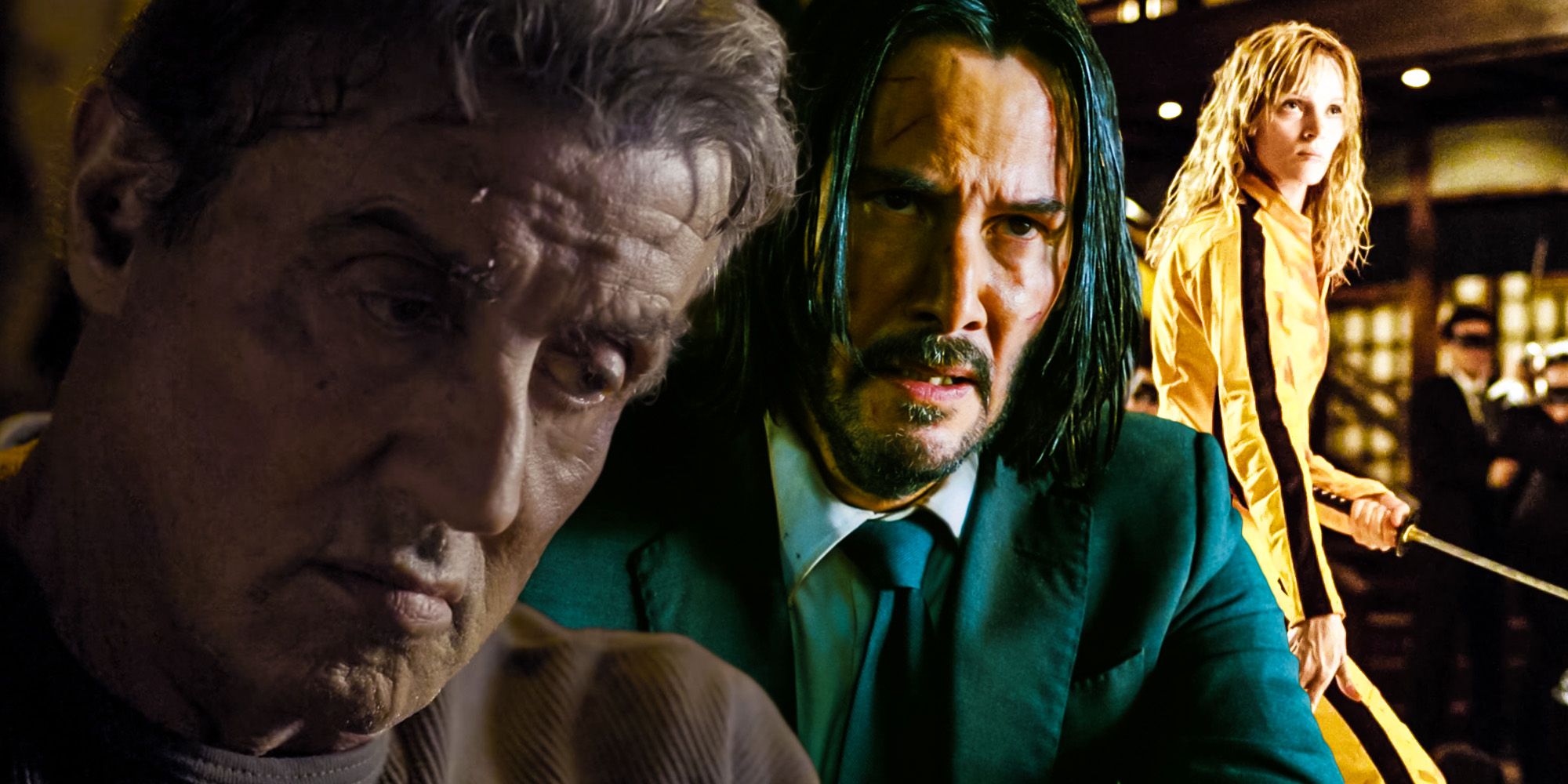 The Expendables famously paired famous action movie stars together, but the best reboot idea should pair iconic movie characters instead.

While a total reboot of The Expendables franchise doesn’t seem to be on the cards (yet), the best way to do it would be to unite classic action movie characters. The Expendables was Sylvester Stallone’s follow-up to the success of both Rocky Balboa and 2008’s Rambo. Expendables famously united a group of action movie actors like Stallone, Jason Statham, Jet Li, Dolph Lundgren and many more. The movie was sold on this all-star pairing, and while The Expendables received mixed notices overall, it was a sizable hit.

The Expendables 2 and 3 added more famed action titans, including Wesley Snipes, Chuck Norris and Harrison Ford. The series hit a setback with the third outing, which attempted to reach a broader audience with a PG-13 rating. This meant Expendables 3 – which almost cast Jack Nicholson – wasn’t the grown-up alternate to milder action movies that fans of the series wanted, while also not being cool enough for newcomers unfamiliar with many of the cast. The Expendables 4 is set for release in 2022, which reunites some familiar faces with new cast members like 50 Cent and Megan Fox.

Related: The Expendabelles Updates: Is The Spin-Off Canceled?

Time will tell if The Expendables 4 revives the saga, however. The entire appeal of The Expendables has been seeing the likes of Stallone share the screen with Jean-Claude Van Damme, Arnold Schwarzenegger or other icons of a certain era. While the films are undemanding fun at their best, they’ve also never matched or lived up to the best work of any of the assembled cast either. If the series ever hits the reset switch, one direction The Expendables could go is to unite a group of classic action movie characters, instead of actors.

Since Stallone created The Expendables franchise in the first place, maybe the most obvious choice for leader would be Rambo. He already lead a team of mercenaries for a rescue mission in 2008’s Rambo, and it was a line of dialogue from the second movie where he called himself “expendable” that gave the series its title. From there, there’s no shortage of characters that could sign up – so long as there’s a semi-credible explanation for their union. Statham’s Frank Martin from The Transporter could sign up, or alternatively Statham’s assassin character Bishop from The Mechanic movies. Since Rambo and Bishop are both characters owned by Millennium – who produce The Expendables saga – they seem like a good place to start.

Millennium owns the Undisputed and Ninja movies fronted by Scott Adkins too, and while either would be great picks, explaining why Bokya is joining with mercenaries is another task. Extending beyond properties owned by Millennium, Uma Thurman’s The Bride from the Kill Bill duology, Arnie’s Dutch from Commando, Van Damme’s Chance from Hard Target or Chow Yun-fat’s Tequila from Hard Boiled would all make for a killer unit. Fans of The Expendables have always wanted to see the likes of Kurt Russell, Jackie Chan, Michelle Yeoh and many more join the series, but having them reprise their most famous roles would be a rights issue nightmare.

Assuming the actors involved are even willing to return to these roles, Millennium would then have to negotiate with other production companies for the crossovers to happen. While shared universes are becoming more common thanks to the MCU and its sorted offshoots, a more grounded series like The Expendables – which Jackie Chan has avoided joining thus far – adding a roster of famous characters is much trickier. Still, if The Expendables 4 doesn’t hit with viewers, it’s certainly one option would considering for a reboot.

The Conjuring Haunted House Sells For $1.5 Million, 27% Above Asking Price


It’s pronounced Paw-rick, not Pad-raig. Now that’s out of the way, a brief introduction. Padraig has been writing about film online since 2012, when a friend asked if he’d like to contribute the occasional review or feature to their site.

A part-time hobby soon blossomed into a career when he discovered he really loved writing about movies, TV and video games – he even (arguably) had a little bit of talent for it. He has written words for Den of Geek, Collider, The Irish Times and Screen Rant over the years, and can discuss anything from the MCU – where Hawkeye is clearly the best character – to the most obscure cult b-movie gem, and his hot takes often require heat resistant gloves to handle.

He’s super modern too, so his favorite movies include Jaws, Die Hard, The Thing, Ghostbusters and Batman. He can be found as i_Padds on Twitter making bad puns.

Ruben Randall - May 22, 2022 0
Celebrity
In the wizarding world, the Weasley family was often looked down upon by many higher class wizards and witches, Lucius (Jason Isaacs)...

Talentless and Proud: Over 100 Apply for Comedy-Acapella Group Mediocre Melodies