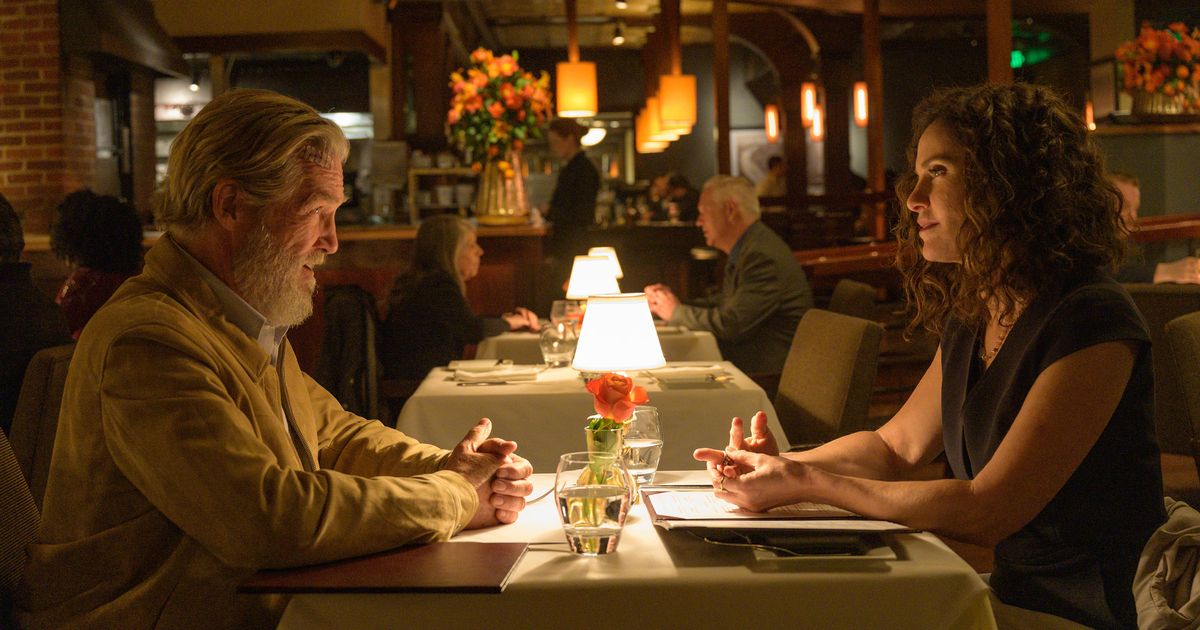 There’s no rest for The Old Man: not for the show, not for its viewers, and certainly not for the Old Man in question, Dan Chase. Tonight’s two-episode series premiere doesn’t allow much time to process everything thrown at us in the first hour before plunging ahead into another character-and-exposition-heavy 60 minutes.

In this second episode, we meet the two truly compelling characters of the series, Amy Brenneman’s cheerless divorcée, Zoe McDonald, and Alia Shawkat’s junior FBI agent, Angela Adams. Again, it’s not that Dan Chase and Harold Harper aren’t compelling; they’re played by Jeff Bridges and John Lithgow. In the hands of lesser actors, however, it’s easy for Chase and Harper to be reduced to stock roles.

But first, more backstory: The episode opens in the 1980s, where in a desolate Afghanistan desert, we learn that during the Soviet-Afghan War, Chase went rogue from the U.S. government and joined forces with a warlord named Faraz Hamzad. Chase’s reasoning is right out of the typical spy-thriller playbook: The “good guys” may be the “bad guys” after all, and vice versa. What we further deduce from this secretive desert meeting between Bill Heck’s Young Dan Chase and Christopher Redman’s Young Harold Harper (Redman doing a superb John Lithgow impersonation) is Harper knew about Chase’s treachery but kept it a secret from his superiors for decades. That and Dan Chase’s real name is “Johnny.”

In the present day, Chase is in bad shape. At his age, one doesn’t bounce back from a roadside three-against-one beatdown so quickly, even if you are ex-CIA. Having shed his “Dan Chase” identity, he’s now “Peter Caldwell,” and he’s recuperating in small-town Pennsylvania by renting a guest house from Brenneman’s character, Zoe, who turns out to have plenty of her own demons. Zoe is immediately spooked by Chase’s dogs, fearing they’ll destroy the furniture, which will lead to a fight with her vindictive ex, who technically still owns the property. She shuts down the arrangement, and Chase prepares to leave as Zoe tears into a pathetic microwave meal while poring over “final notice” bills.

Harper, meanwhile, torn between his own transgressions and his official duty, seeks counsel from his mentor, Morgan Bote (Joel Grey!). After a storied CIA career, Bote now paints the hours away in his storybook mansion when not fact-checking his New York Times obituary. He’s fully briefed on both Dan Chase’s and Harold Harper’s 30-year-old crimes and is out of fucks to give in his old age. This scene is crucial, though, because it’s where we find out that at some point, Chase betrayed Faraz Hamzad, and now Hamzad is out for revenge. This is a problem for Harper because, shocker, he also helped Chase betray Hamzad. Bote offers one last piece of advice for Harper: Do whatever it takes to bury this case so that when the New York Times calls to fact-check his obituary, he’ll only have to confirm the good stuff. Then he slips him a piece of paper with a handwritten phone number.

Back in Gloomytown, Pennsylvania, Chase pulls out all the stops to reverse Zoe’s housing decision. While peering through her window, he notices the unpaid bills and sad Lean Cuisine lunch. To buy himself time, he cooks up a story about needing a tow truck just so he can charm the shit out of his landlady. He whips her up a real meal, all the while talking to her about how cooking for someone can “soften the hardest of hearts.” Of course, this tactic works, though not before Zoe shares her own anecdote about her mother cooking her scrambled eggs to cheer her up. She lets Chase stay.

Chase’s rugged charisma worked a little too well, though, because before long, Zoe is inviting him out to dinner. What ensues is an adorable AARP date where Zoe and Chase trade pill regimens and relationship war stories. This is Zoe’s first “first date” since the George H.W. Bush administration, and Chase drops a hint about how it was love at first sight with his late wife, but the situation was too “complicated” to act on it immediately. Hmm. And Faraz Hamzad is out for revenge, you say?

Zoe’s story is complicated too: She was always lukewarm about her marriage, and she let it fester until it became untenable. Eventually, her husband grew to resent her, leaving her for another woman, and she’s still wallowing in the guilt. Chase is kind and supportive, reassuring Zoe with the series’ running theme: “You’re not the villain here.” But then Zoe throws that idea back at Chase, spooking him into silence as he grapples with what he did three decades ago: “Nobody ever sees themselves as playing” the villain, she observes. Boy, do they both need that wine list.

Upon returning to his FBI office, Harper tasks his protégée, Angela Adams, with tracking down Dan Chase’s daughter. A difficult task considering he doesn’t even know her name. But Angela’s bigger workplace challenge is the distrustful CIA agent Raymond Waters, who already suspects Harper knows way more about Chase than he’s letting on. Waters, through a mansplain-y, exhaustingly expository monologue, attempts to recruit Angela by pointing out her boss’ potential secrets. But she’s not one to throw her father figure, Harper, under the bus.

During the Tense Drive Home From Dinner, Zoe gets a call from her son. We don’t hear his dialogue, but we don’t need more details other than Zoe’s insistence that she “paid it” and that “everything should be square in the bursar’s office.” She then notices a police checkpoint up ahead, and since she’s behind the wheel, she worries about that second glass of wine. (Girl, that’s the least of your problems right now.) Both she and Chase are asked to step out of the car, and Chase, brandishing his trusty knife from the last episode, watches nervously as a cop questions Zoe. When Chase is seemingly recognized, he springs into action, slicing one officer’s face with the knife before grabbing that cop’s gun to shoot Zoe’s interrogator. A splattered-with-blood Zoe’s all WTF? before uttering a question that’s constantly repeated in this series: “What the hell are you?” Just like Abbey, she looks at Chase and says, “I see you,” before Chase shoots her dead.

No, no, no, none of that actually happens. That was simply Chase imagining the worst-case scenario, because that’s how the mind of a rogue ex-spy works. The only thing the cops noticed was the alcohol on Zoe’s breath. Knowing he’s putting Zoe in a tremendous amount of danger. Chase refuses her advances and announces his plans to move on. But she’s not having any of that because she wants herself some Jeff Bridges. Can’t say I blame her.

Late night at the FBI: Angela presents some bad news to her boss: A police report confirms Dan Chase’s daughter died in 2003 by suicide, thus destroying Harper’s leverage over his target. Now, we know Emily isn’t dead, so, living under a different identity, perhaps? Two episodes in, she’s still just a voice on the other end of a burner phone.

While in bed with Zoe, Chase continues to be haunted by a dementia-riddled Abbey, his nightmares alluding to the idea that the Chase marriage had a dark side. As in, Dan “disfigured” Abbey? Jesus, what is their untold story? Chase is startled awake in an empty bed and immediately goes to break things off with Zoe.

As he loads the dogs into the car, Chase hears glass breaking. In the kitchen, Zoe has taken her frustrations out on an innocent piece of crockery. Whatever plan Chase had to abscond into the night has now been eclipsed over his desire to comfort a distraught Zoe — because her latest tuition check bounced. Even in divorce, Zoe’s ex is finding ways to passive-aggressively torment her, like shorting his alimony payments.

Naturally, Chase offers to cover Zoe’s debts, but what really wins her over is what he does next. While the camera stays on Amy Brenneman, we slowly pan away as she tearfully realizes what her tenant is doing. Yep, he’s showing her love by making scrambled eggs. Oh, this is not going to turn out well.

It’s not going to turn out well because thanks to that police checkpoint, Harper is now in possession of Chase’s location, as well as a copy of Zoe’s driver’s license. And because Harper is adding yet another wrinkle to this traditional spy-chase story. Remember that slip of paper from Morgan Bote? It contained the number for a bounty hunter who specializes in tracking down elusive ex-operatives — and, I assume, killing them. (Given Harper’s desperation to save his own neck, it doesn’t sound like this guy’s being hired to bring Chase in for questioning.)

Zoe’s gonna be wishing for the days of those dreary, microwavable lunches before long.

• Even though Jeff Bridges’s character’s real name is Johnny, and he’s known to Zoe as “Peter Caldwell,” for the sake of consistency in these recaps, I will be referring to him as “Dan Chase.”

• What is it about people making scrambled eggs on TV and in movies that’s so comforting? Billions did it last year, which itself was a tribute to a famous scene in Big Night.

Keep up with all the drama of your favorite shows!

By submitting your email, you agree to our Terms and Privacy Notice and to receive email correspondence from us.

Tevin Farmer vs Mickey Bey rescheduled for August 12 in Arizona