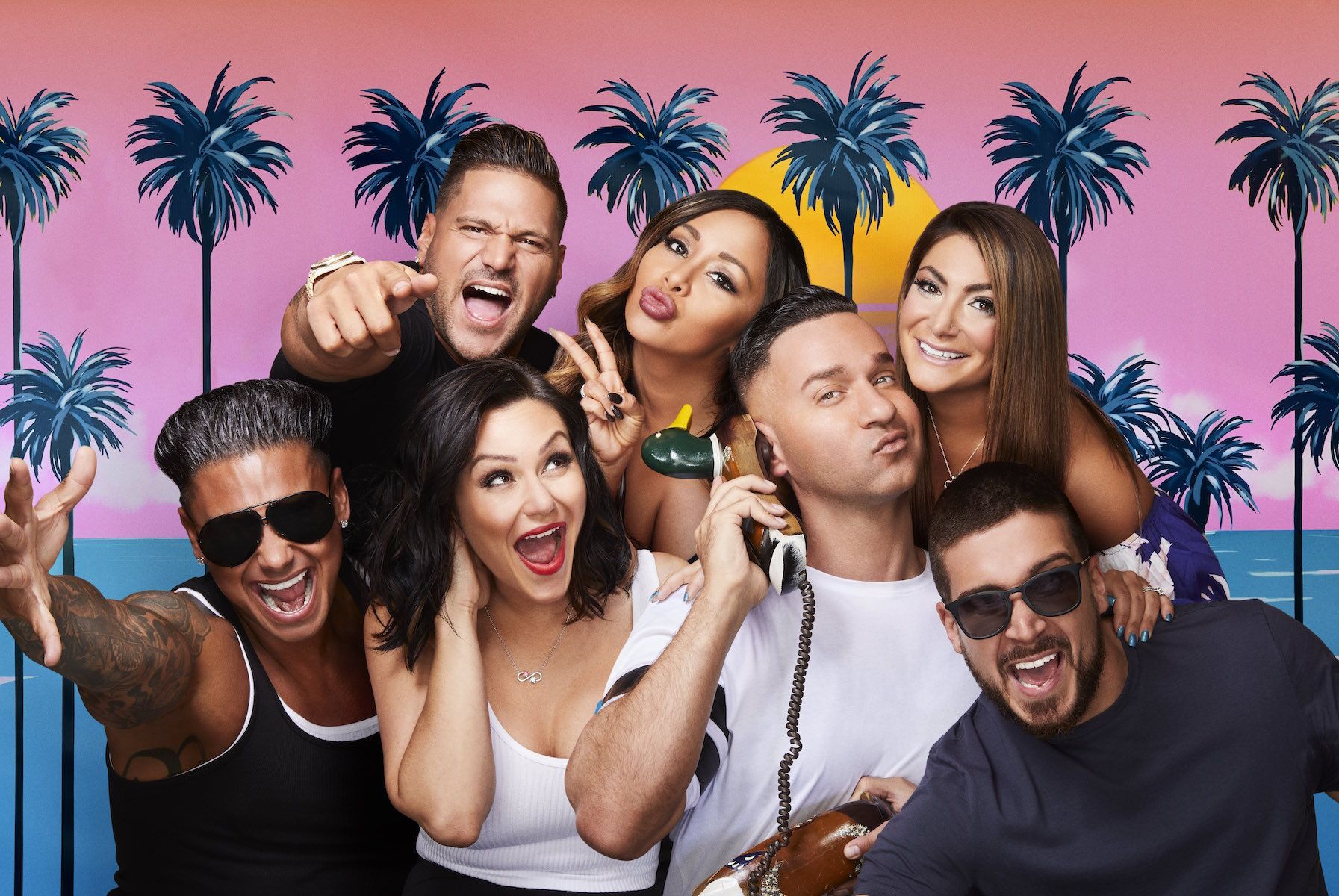 The world was obsessed with Jersey Shore when it first premiered on MTV. The show was filled with hilarious drama between the cast members and all the random folks they would meet on their nights out at clubs and bars. Jersey Shore is considered an iconic reality TV show that will forever be remembered as the blueprint to reality TV craziness.

The cast members of the show have been doing really well for themselves financially since Jersey Shore came to an end. To top it off, they’ve even rebooted the show with Jersey Shore: Family Vacation. Although not every single member of the previous show was part of the reboot, it was still nice to see so many familiar faces. Here’s where everyone’s net worth stands today after reality TV fame, spin-offs, and various business ventures.

Mike “The Situation” Sorrentino has a net worth of $300 thousand

At the height of his Jersey Shore career, Mike “The Situation” Sorrentino was pulling in $150,000 per episode. After Jersey Shore ended, he appeared on Dancing With the Stars and Celebrity Big Brother, adding to his reality TV show résumé. Sorrentino even penned several books and launched a multitude of side businesses to continue expanding his wealth.

His net worth was reportedly somewhere around $10 million before he got in legal trouble with his taxes. Sorrentino ended up serving time in prison, and these days his net worth stands at around $300,000. The drama surrounding Sorrentino’s prison time has been heavily discussed in front of the cameras for MTV.

Deena Cortese has a net worth of $2 million

Deena Cortese currently has a net worth of $2 million. She was a late addition to the Jersey Shore cast, but she quickly fit in with everyone in the house upon her arrival. In high school, Cortese was involved with the cheerleading squad and the dance team.

In episodes of Jersey Shore, she spends a lot of time showing off her dance moves at clubs and bars. She became close friends with Nicole “Snooki” Polizzi during her time on the show. Some of the other MTV shows she’s been part of include Couples Therapy, When I Was 17, and Silent Library. She competed on Celebrity Fear Factor as well. Reality TV is in her blood.

Ronnie Ortiz-Magro has a net worth of $3 million

Ronnie Ortiz Magro currently has a net worth of $3 million. Along with starring on Jersey Shore, he has appeared in a multitude of other reality TV shows over the last few years. His breakthrough took place in 2009 when the first season of Jersey Shore premiered, but he continued starring in other interesting shows from there.

Some of those shows include Impact Wrestling and Famously Single. In 2017, Ortiz-Magro purchased a Las Vegas property for $725,000. Unfortunately, too many domestic disputes took place at the house and the police were called to the scene multiple times. In 2020, he announced that he was selling his home for $870,000.

Angelina Pivarnick has a net worth of $4 million

Angelina Pivarnick has a net worth of $4 million today. She’s considered one of the most unlikable people in the Jersey Shore house since she struggled to get along with her cast members the majority of the time she was in front of the cameras. In Season 1 of the hit MTV reality show, she refused to work her shift at the T-shirt shop and ended up getting evicted from the house.

When she returned for Season 2, she got kicked out yet again for getting into a violent altercation with Sorrentino and Polizzi. Even though Pivarnick didn’t get along with some of her castmates, she became a full-time cast member of Jersey Shore: Family Vacation in 2019.

Sammi “Sweetheart” Giancola has a net worth of $4 million

Sammi “Sweetheart” Giancola currently has a net worth of $4 million. She was an extremely important part of the original Jersey Shore cast, but she chose not to return for Jersey Shore: Family Vacation. Her relationship with Ortiz-Magro was extremely volatile and toxic during the first few seasons of the show. For her own sake, she decided to keep her distance in order to move on with her life.

Giancola has modeled in several magazines including People and Harper’s Bazaar. She launched her own clothing line in 2013 under the name Sweetheart Styles to go along with her TV show nickname. She also linked up with SXE Fitness to release a trendy line of fitness apparel. Giancola’s business-savvy ethics don’t stop there, though—she even launched her own fragrance called Dangerous around that same time.

Jenni “JWoww” Farley has a net worth of $4 million

Jenni “JWoww” Farley currently has a net worth of $4 million. Before becoming a bona fide reality TV star, Farley had her own graphic design business, proving that she already knew the importance of creating wealth and success for herself. At the age of 23 she joined the cast of Jersey Shore, and it changed her life forever. To this day, she is one of the most recognized names and faces from the show.

Fans of the raunchy reality TV show absolutely adore JWoww. Some of the other reality TV shows she’s starred in include Marriage Boot Camp: Reality Stars, TNA Impact!, and Disaster Date. She launched her own clothing line called Filthy Couture and started promoting a line of sun tanning products in conjunction with the Australian Gold Company. Back in 2013, Farley landed on GQ Magazine‘s “Sexiest 100 Ladies of the 21st Century” list. Her spinoff show with Polizzi, Snooki & JWoww, premiered in 2012.

Nicole “Snooki” Polizzi has a net worth of $4 million

Nicole “Snooki” Polizzi has a net worth of $4 million, after earning around $150,000 per episode of Jersey Shore. Polizzi dipped her toes into the world of reality TV before Jersey Shore, though. She starred on the show Is She Really Going Out With Him? on MTV in 2009 with her ex-boyfriend Justin.

The first Halloween celebration after Season 1 of Jersey Shore led to a lot of Snooki costume sales. Dressing up like Polizzi was one of the most popular ideas people had that year.

After the original Jersey Shore, she starred in four seasons of Snooki & JWoww, where the women showcased what it was like to be mothers who still liked to have a good time. Dancing with the Stars’ 17th season featured Polizzi showing off her dance moves with Sasha Farber as her teammate, where they ended up landing in eighth place. Jersey Shore was a great place for Polizzi to gain national attention. She’s now considered a reality TV gem.

Vinny Guadagnino has a net worth of $5 million

Vinny Guadagnino currently has a net worth of $5 million. His time on MTV served him well. He was only 21 years old when he was cast on Jersey Shore, and he ended up being part of all six seasons of the show. From 2009 until 2012, the world became very familiar with his face, sense of humor, and overall personality.

After the original Jersey Shore wrapped, Guadagnino started taking acting lessons to pursue a career in Hollywood. Most recently, the reality TV shows he’s participated in include The Masked Dancer and The Masked Singer. In 2017, he purchased a home in Hollywood Hills for $3.5 million. As of 2021, this house has been listed for sale at a price point of $3.85 million.

Paul D. DelVecchio Jr., aka DJ Pauly D has a net worth of $20 million

The wealthiest individual to come from Jersey Shore is DJ Pauly D. He currently has a net worth of $20 million. He’s pursued a career as a DJ in the Las Vegas area in recent years and performed at exclusive shows in various casinos and resorts along the Las Vegas strip. Along with being a reality TV star and beloved DJ, Pauly D is also the social media ambassador for the WWE SummerSlam, an annual pay-per-view wrestling event.

These days, DJ Pauly D has a huge social media presence, with over 4 million Twitter followers and over 4 million Instagram followers. He also signed on to star in a Jersey Shore spinoff called Double Shot at Love with Guadagnino.

Ruben Randall - November 13, 2021 0
Money
Getting in character. Many well-known Hollywood stars use method acting to get into character and to better bring authentic portrayals to the screen. As Nicole...