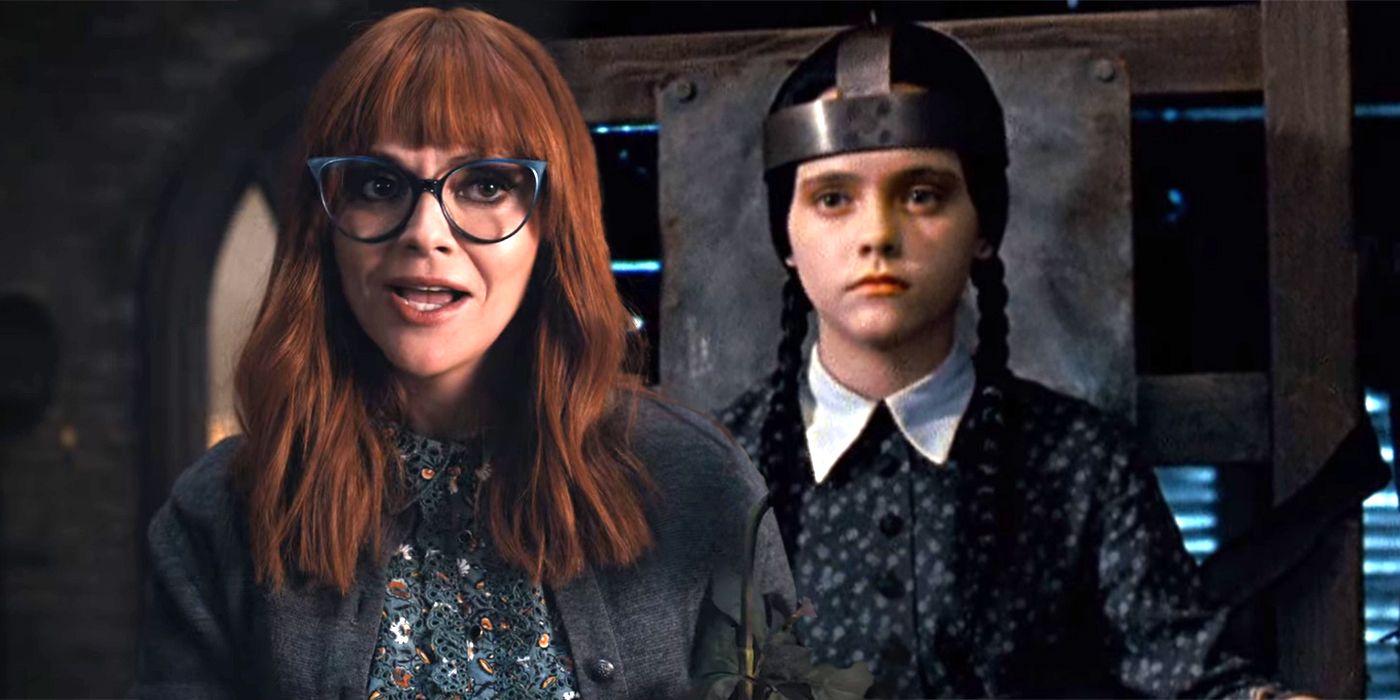 WARNING! This article contains SPOILERS for Wednesday season 1Wednesday‘s Ms. Thornhill, Christina Ricci, played Wednesday Addams previously and people are excited about it. The Addams Family, originally introduced as a comic strip intended to satirize the ideal American family, have seen many adaptations over the years, with the most recent being Netflix’s Wednesday, created by Alfred Gough, Miles Millar, and famously gothic filmmaker Tim Burton. One of the most popular and enduring Addams Family adaptations was the 1991 movie, which got a sequel in 1993 and starred Anjelica Huston as Morticia, Raul Julia as Gomez, Jimmy Workman as Pugsley, and Christina Ricci as Wednesday Addams. Ricci’s Wednesday was one of the breakout characters of the film, with the young actor perfectly bringing the morose little girl to life.

Netflix’s Wednesday differs in a few key ways from other adaptations since it centers solely on Wednesday rather than following her whole family and presents her as a teen rather than a young girl. Jenna Ortega was cast in the role, making Netflix the first to accurately depict the Addams kids’ Latine heritage. However, it was previously announced that Ricci would be returning to the world of The Addams Family in an undisclosed role. Her surprise appearance came in the form of Ms. Thornhill, one of Wednesday’s teachers at Nevermore Academy. The internet has taken to Twitter to express excitement over Ricci’s appearance in Wednesday, with some fans of the series just making the connection that Ricci is Thornhill and others frustrated that some were slow to notice the Easter egg or seemed not to recognize the talented Ricci. See what Wednesday fans had to say below:

Ms. Thornhill Is The Perfect Wednesday Character For Christina Ricci

Ms. Thornhill was introduced in the Wednesday pilot as Nevermore Academy’s only and first normie teacher, a sweet botany instructor with an affinity for carnivorous and deadly plants who bonds with Wednesday soon after the teen arrives. Over the course of the series, Ms. Thornhill is kind to Wednesday, seeming to understand her like almost no one else at Nevermore and acting as one of the few people Wednesday forms a connection to. To others, Ms. Thornhill is outwardly supportive of Wednesday, defending her to Principal Weems (Gwendoline Christie)

The character’s ability to connect with Wednesday hints at Ricci’s own iteration of the Addams daughter, who certainly has plenty in common with Ortega’s version since they played the same character at different stages of her life. Those moments of bonding and connection between the two gave Ricci the opportunity to pass the torch of portraying the gothic girl to Ortega, delighting fans of the 1991 movie and the new series. However, there was more to Ricci’s character than many initially realized, and Ms. Thornhill was eventually revealed to be the mastermind behind the monster’s killings as well as the aristocrat Laurel Gates, who had been missing and presumed dead.

Ms. Thornhill shares much of Wednesday’s family history, economic status, penchant for weirdness, and appreciation for the dark and gothic, but there is one key difference between the characters: Ms. Thornhill’s hatred for outcasts, inherited from her father. Since the character’s bigotry turned her to murder, Ms. Thornhill can be read as a twisted version of Wednesday that embraced her dark side, ironically hating outcasts despite Ricci’s Wednesday’s rejection of racism and colonization. By contrast, Ortega’s Wednesday seems to keep to herself but actually does care for others, especially her new outcast friends. Ms. Thornhill represents a person Wednesday could become if she didn’t have genuine empathy for others, making Ricci’s Wednesday character the perfect nod to her previous stint as the Addams family daughter.

America Ferrera, Chloe Bridges, and Xochitl Gomez Talk About The Importance of The Latino...