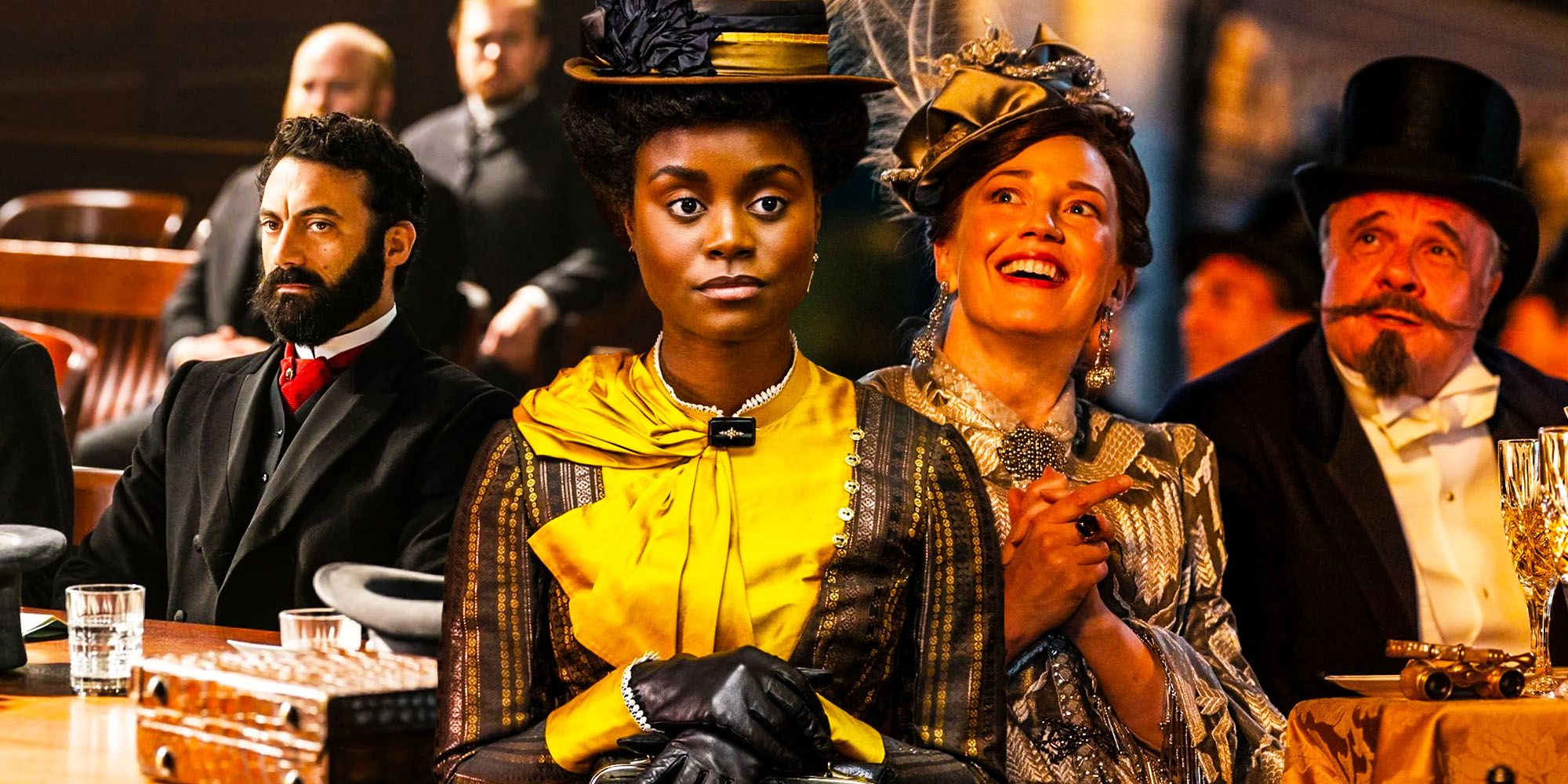 By the start of The Gilded Age’s season 1 finale, the pivotal story of George Russell’s (Morgan Spector) legal dilemma over a tragic train crash was resolved with Mr. Russell’s exoneration. The main story of The Gilded Age’s finale involved Bertha’s ball celebrating the debut of the Russells’ daughter, Gladys (Taissa Farmiga), into high society. Meanwhile, Marian and Raikes plotted to elope with the help of Peggy and Mrs. Chamberlain (Jeanne Tripplehorn), even though it meant alienating Marian’s Aunt Agnes (Christine Baranski). The only major storyline involving the servants of The Gilded Age was a surprising revelation about the Russells’ chef, Monsieur Baudin (Douglas Sills), that helped decide the success of Bertha’s ball.

Thankfully, The Gilded Age was renewed for season 2 by HBO so the story of the Russells, van Rhijns, Brooks, Astors, and Scotts will continue. The Gilded Age is reportedly a hit for HBO with ratings that exceeded the network’s buzzy summer 2021 phenomenon, The White Lotus. HBO now has an American version of Downton Abbey from creator Julian Fellowes that may continue for even more seasons. But here’s how the key events of The Gilded Age wrapped up for the main characters in the period drama’s splendid season 1 finale.

The Gilded Age Finale Ended Like The Downton Abbey Movie

There is undoubtedly a great deal crossover between fans of The Gilded Age and Downton Abbey’s devoted audience who couldn’t help but notice how similar The Gilded Age season 1 finale’s ball was to the ending of the 2019 Downton Abbey movie. Both concluded with an elegant dance that gave the characters a reason to celebrate after the trials they had endured. Of course, it’s no surprise that The Gilded Age and Downton Abbey’s first film had similar conclusions and resembled each other since both were written by Julian Fellowes and directed by Michael Engler. The Gilded Age took on a life of its own that made it more than just “the American Downton Abbey” but there are unavoidable commonalities between the two series that make them fascinating counterparts. For instance, Agnes van Rhijn’s searing wit grew to be just as endearing and reliable as Maggie Smith’s Lady Violet, the Dowager Countess.

Bertha Won (Like The Vanderbilts) When Mrs. Astor Came To Her Ball

The Gilded Age began with Bertha throwing a ball that was sparsely attended, which humiliated her. The Gilded Age season 1 finale is a bookend where Mrs. Russell hosts another ball and finally achieves her heart’s desire: a formal acknowledgment by Mrs. Astor. Bertha was humiliated again when she called upon Mrs. Astor, only to be denied an audience. The insult was compounded by the fact that Lina was receiving other, more desirable guests. This led Bertha to uninvite Carrie Astor (Amy Forsyth) and the children of the other families who refused to come to Gladys’ debutante ball. However, Carrie prevailed upon her mother to change her mind. To make her daughter happy, Mrs. Astor paid Bertha a visit, but Mrs. Russell sussed out that it was merely for show and delivered an ultimatum for Mrs. Astor to attend the ball and make her other society friends come as well.

Incredibly, Mrs. Astor acquiesced, with Agnes van Rhijn shocked that she and her sister, Ada Brooke (Cynthia Nixon), were now forced to cross the road and go to the Russells’ ball. Mrs. Astor and other members of the Four Hundred coming to Bertha’s home was the formal recognition of the Russells’ entry into New York high society, which Ward McAllister (Nathan Lane) had been scheming with Bertha to arrange. But Bertha sticking to her guns got her (and Gladys) everything she wanted. Of course, George also helped by blackmailing one of his clients into attending the ball, but Mr. Russell was always as devoted to his wife and her success as she is to his. Bertha’s victory is The Gilded Age adapting real-life history as it’s nearly beat-for-beat similar to how Alva Vanderbilt triumphed over Mrs. Astor so that the Vanderbilts could enter high society.

Meanwhile, other dramas played out at the Russells’ ball. To the chagrin of his secret lover, John Adams (Claybourne Elder), Oscar van Rhijn (Blake Ritson) got significantly closer to his goal of marrying Gladys for her fortune. Unfortunately, Thomas Raikes also attended the Russells’ ball, unaware that Marian and her aunts would be attending, and their breakup was finalized.

The social-climbing lawyer Tom Raikes no-showed his planned elopement with Marian and, when she confronted him, Raikes revealed that he was planning to marry the wealthy Cissie Bingham (Katherine Romans). Raikes spent all of The Gilded Age season 1 wooing Marian and professing his love for and desire to marry her. Miss Brook believed Raikes was genuine since she had no fortune for him to covet, but the lawyer always appeared too perfect and too eager to marry Marian from the outset. Meanwhile, Aunt Agnes boasted that she is “never wrong,” and Thomas Raikes was indeed the “adventurer” Agnes pegged him to be, which was a disappointing but not unexpected turn of events.

As Marian’s cousin, Aurora Fane (Kelli O’Hara), observed when she saw Raikes all over town, Miss Brook’s suitor was increasingly enamored with the privileged life of New York high society. Raikes would have had to give it up and support Marian if they married, a prospect that ultimately didn’t appeal to him. Instead, Raikes took the cowardly path and planned to end things with Marian with a letter before she confronted him at her office. With their story resolved, it’s unclear if Tom Raikes will be back in The Gilded Age season 2. However, the series already seeded a possible romance between Marian and Larry Russell (Harry Richardson). They formed a friendship and Larry immediately rescued Marian at the ball, setting the stage for a relationship that will certainly earn the displeasure of the Russells and Aunt Agnes.

The Truth About Peggy’s Baby

Details about Peggy Scott’s past were doled out throughout The Gilded Age season 1 and the finale revealed that Peggy’s baby, who she thought had died, was alive after all. Worse, it was her father, Arthur (John Douglas Thompson), who arranged for the baby to be adopted and he lied to Peggy and her mother, Dorothy (Audra McDonald), that the child was dead. Peggy’s hatred of her father stemmed from his disapproval of a relationship she had with a stockboy named Elias Finn at his pharmacy and the drama that transpired.

Before she met Marian Brook and needed the help of her lawyer, Mr. Raikes, Peggy secretly eloped with Elias and became pregnant but she was told the baby was stillborn. Arthur then had Peggy’s marriage to Elias annulled while she was suffering from post-partum depression. Arthur’s justification for stealing his grandchild and giving him away was to protect Peggy and Dorothy from being disgraced. But now that Peggy knows her child is alive, she and her mother left for Philadelphia to find the baby, setting the stage for Miss Scott’s next journey in The Gilded Age season 2. However, how Peggy’s sudden absence to find her baby will affect her career as a writer and journalist working for T. Thomas Fortune (Sullivan Jones) remains to be seen.

Perhaps the most surprising story in The Gilded Age season 1 finale is the revelation that Monsieur Baudin is not French but an American. In The Gilded Age episode 8, Baudin was seen arguing with an unidentified woman by Bannister (Simon Jones), Church (Jack Gilpin), and Mrs. Bruce (Celia Keenan-Bolger). Baudin admitted the woman was his wife, who was blackmailing him and threatening to reveal that he is really Josh Borden from Witchita, Kansas. Baudin admitted his true identity and origin story as a merchant sailor who learned to cook in Paris and adopted a French identity to find work in New York to George. Although Mr. Russell rewards loyalty in spite of his ruthless business practices, Bertha demanded Baudin be fired to save face.

However, when the snooty replacement French chef Bertha hired got drunk and was unable to cook for the ball, Borden immediately stepped in, prepared the dinner he had originally planned, and “saved the show,” according to George. This earned Borden the Russells’ gratitude and he was hired back as the household’s chef, despite Bertha’s reservations about his “Middle West” origins. The story of Monsieur Baudin/Josh Borden was certainly strange but amusing. Best of all, it creates a challenge for the Russells, who now have to admit they have a French-trained American chef just as they’ve entered the elite of New York high society.

Questions And What’s Next In The Gilded Age Season 2

Oddly, The Gilded Age season 1 finale didn’t resolve the lingering plot of the letter sent to Aunt Agnes betraying Bannister moonlighting for the Russells. After Bertha fired her, Turner (Kelley Curran) wrote Bannister a note revealing the culprit. Bannister then paid a visit to the Russells’ servants and insinuated it was Church (who is the obvious suspect). Yet Bannister made no moves against Church, saving the resolution for The Gilded Age season 2. It’s also unclear if Turner will return in season 2 to seek revenge on George and Bertha Russell. Instead, The Gilded Age finale ended just like the series began, with the two butlers from rival households, Bannister and Church, nodding to each other (but this time, with a hint of suspicion from Bannister).

Related: The Gilded Age: Turner Has The Perfect Revenge On George & Bertha Russell

Similarly, no resolution was given for another The Gilded Age mystery: Watson’s (Michael Cerveris) obsession with Mrs. Flora McNeil (Rebecca Haden), who George’s valet spends his afternoons watching from afar. Watson identified himself as “Collyer” to Mrs. McNeil, and she seemed to remember him. Watson then avoided Flora when the McNeils attended the Russells’ ball. This is another storyline that The Gilded Age season 2 needs to resolve. Yet the fortunes of The Gilded Age’s servants could turn as the series continues. As Jack (Ben Ahlers), Agnes’ footman, told Bridget (Taylor Richardson), the maid, “After all, this is America,” which sums up the potential that anything can happen in The Gilded Age.

Next: The Gilded Age’s Vanderbilt True Story Hinted How The Russells Won

The Gilded Age Season 1 is available to stream on HBO Max.

The One Non-Marvel Movie You Should Watch Before Moon Knight


John Orquiola is a Features staff writer and interviewer who has been with Screen Rant for five years. He began as a director’s assistant on various independent films. As a lover of film and film theory, John wrote humorous movie reviews on his blog, Back of the Head, which got him noticed by Screen Rant. John happily became the Star Trek guy at Screen Rant and he leads Feature coverage of the various Star Trek series, but he also writes about a wide range of subjects from the Marvel Cinematic Universe to Cobra Kai. His other great nerdy love is British TV series like The Crown, Downton Abbey, and Killing Eve. John can be found on Twitter @BackoftheHead if you want to see photos of the food he eats.

Seo In Guk and Oh Yeon Seo to star in comedy-mystery...