Local collectives are pushing back against fashion’s obsession with star designers.

The typical fashion narrative involves a star skyrocketing to fame. But behind every name is a cadre of collaborators. Though social media has enabled even newcomers to earn global accolades, more designers are thinking collective—and hyperlocal. Brooklyn-based Gogo Graham has tapped industry friends across disciplines for her shows, while Pyer Moss’s Kerby Jean-Raymond has launched Your Friends in New York with the luxury conglomerate Kering to nurture creatives.

Antoine Gregory has enough jobs to fill several résumés: fashion editor, consultant, brand director of Theophilio, and founder of the Black Fashion Fair. Launched in 2020, the latter project grew out of his desire to archive great Black designers past and present. “We want to make sure that we’re supporting brands right now, so that we can make sure that they exist 20 to 30 years from now,” he says. The group has also launched a magazine highlighting Black fashion talent.

Across the pond, another collective seeking to give newcomers exposure, community, and, most of all, freedom is CONGREGATIONdesign, an anonymous London-based group that allows designers to show via lookbooks, prompt-based collections, and events. The only focus is creativity—not sales. Founder Marie (who declined to give her last name) says Congregation thrives in flux. “It’s more about saying, ‘This is not working. Maybe that would,’ to keep engaging [in] new processes—trial and error—because we love to make mistakes.” The in-between area is uncomfortable for many, as fashion has regularly operated as an in-or-out system for so long, but designers are now refuting that as they create new avenues for a slow, thoughtful approach that has no bottom line. As Marie says, “The most important thing, and the answer, is always the next project.”—Kevin LeBlanc

Attack of the Trend Forecasters

If you’ve noticed stories predicting nebulous trends like “indie sleaze,” “night luxe,” or something called “2014 Tumblr girl aesthetic,” you have TikTok trend forecasters to thank. A number of young creators are making a name for themselves by producing content that predicts oddly specific aesthetics like “Parisian ballet” and “coastal grandmother” as the next big thing. It seems that the only thing hotter than the trends is predicting them.

The phenomenon can be traced back to Mandy Lee (@oldloserinbrooklyn), whose October 2021 TikTok predicting a return of “indie sleaze” set off a media firestorm, speeding up the timeline of Lee’s prophecy. Ironically, by making their trend predictions public instead of private, these forecasters now appear to be driving trends rather than foreseeing them.

Historically, trend forecasting has been an opaque business: Analysts spend months assessing runways, world news, and even strangers on the subway to make predictions as far as three years in advance. But due to reverberations caused by the pandemic, we’ve entered a moment when everything familiar has been disrupted—fine, call it a vibe shift—and traditional methods no longer apply. “Foresight is no longer in the hands of futurists,” says Eve Lee, founder of creative agency/internet and youth culture specialist The Digital Fairy.

Can it really be called “forecasting” if each foretold fad is adopted almost immediately? “Social media has created this notion of the super-relevant, spicy present that is ever-fleeting,” says Agus Panzoni, a trend spokesperson for an online clothing reseller who goes by @thealgorythm on TikTok. In a bid to stay informed, consumers embrace these reports as directives rather than waiting to see if the predictions materialize. While instant access to future fads may seem to democratize fashion, the result is an exhaustion with the trend cycle itself. Many of the original trend forecasters are bypassing the predictions they pioneered over concerns that their reports are being taken too literally, or a desire to distance themselves from the faux-casters diluting the genre. “The first viral video I ever made was about how microtrends will cause the trend cycle to implode,” Lee says. “I stand behind that.”—Isabel B. Slone 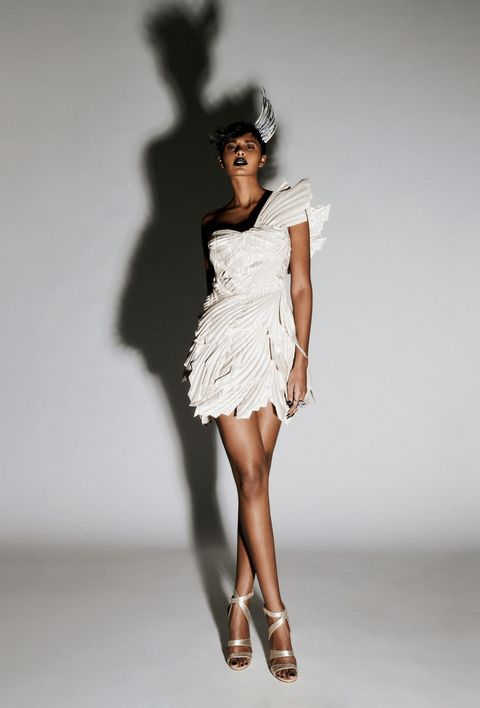 The All-In World of Demi-Couture

For a new class of designers, seasonal schedules and nonstop production have become passé.

For 164 years, haute couture has been the pinnacle of fashion, melding world-class savoir faire with glamorous notions of dressing. At the other end of the spectrum are mass-market collections churned out at a pace many designers can’t keep up with. An emerging vanguard of designers is splitting the difference between the ease of ready-to-wear and the strictures of haute couture, putting aside trend cycles in favor of sustainably made, artful garments, released when they’re ready. This midpoint of slow(er) fashion has been christened demi-couture.

Dutch couturier Ronald van der Kemp creates collections called Wardrobes made from repurposed scraps of fabric from overstock, vintage collections, and factory waste. For him, upcycling comes naturally. “I’m not going to talk about sustainability [constantly],” he says. “I just want to make clothes.” German-born, London-based designer Johannes Warnke crafts avant-garde garments that reflect the use of space, sound, and color in clothing. He hand-dyes fabric and achieves a sumptuous, silky feel with Tencel Luxe, a botanical silk alternative composed of renewable wood sources. (Tencel Luxe is a sponsor of his.) Still, he admits: “When you’re making something new, it’s never going to be fully sustainable. Not making anything new is the most sustainable [thing].”

Designer Conner Ives shows just once a year, to give himself the time to ensure his offerings are technically perfect. But he doesn’t want to be known for being a sustainable designer, echoing Van der Kemp’s sentiment: “I need to make really good clothes. I need to trick the consumer into thinking that it is the same as a dress that was cut from raw virgin material.” He’s found his sweet spot by using couture techniques while eschewing old-school timelines and business models. One of his creations was shown at The Met’s Costume Institute, so it seems people are taking note, regularity be damned.—Kevin LeBlanc

See also  Edward Herrmann Was Asked to 'Keep an Eye On' Alexis Bledel; Here's Why

This article appears in the August 2022 issue of ELLE.

Isabel Slone is a fashion journalist living and working in Toronto, Canada. She has written for the New York Times, T Magazine, Playboy, CNN, the Globe and Mail, Toronto Life and more

Kevin LeBlanc is the Fashion Associate at ELLE Magazine. He covers fashion news, trends, and anything to do with Robyn Rihanna Fenty.

What happens when Mormons stage ‘Fiddler on the Roof’? – The...