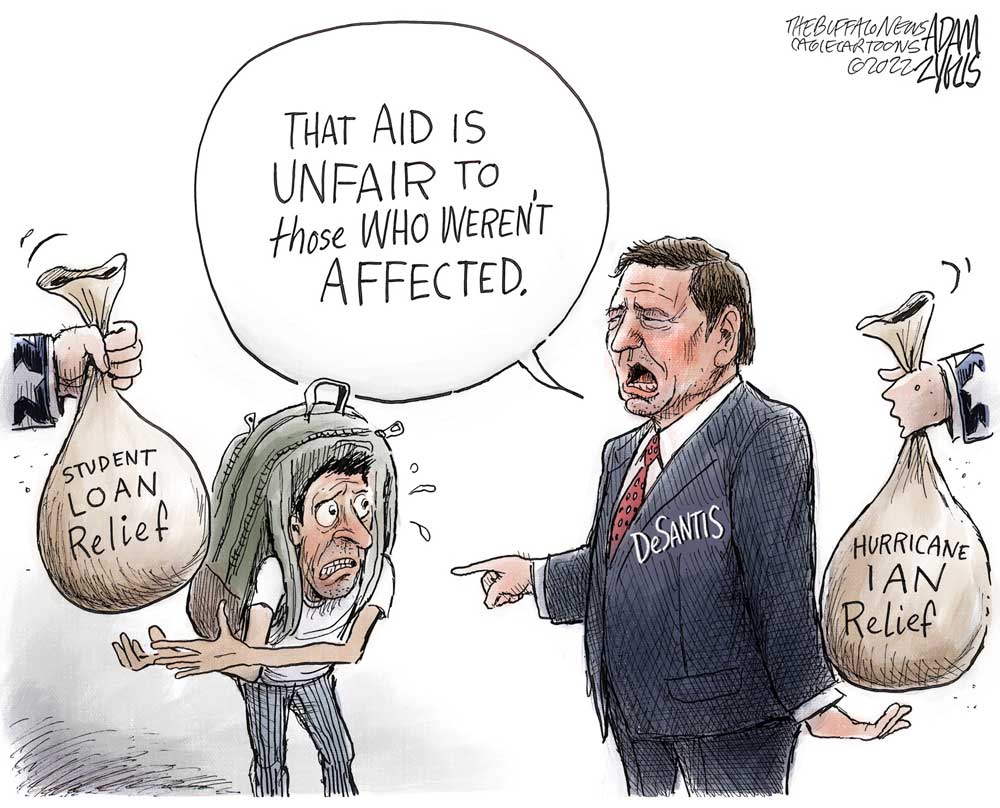 Weather: Sunny in the morning, then becoming partly cloudy. Highs in the upper 70s. North winds 10 to 15 mph. Monday Night: Partly cloudy with a 20 percent chance of showers. Lows in the lower 60s. North winds 5 to 10 mph. Tropical storm watch: The tropics are not entirely calm. Two disturbances are making their way west, but neither is expected to develop into anything threatening, as you can see from this animated forecast.

Today at the Editor’s Glance:

It’s Nobel Prizes Week: The Nobel Prize in Physiology or Medicine is announced this morning at 5:30 Palm Coast time, 11:30 a.m. at The Nobel Assembly at the Karolinska Institute near Stockholm. Physics on Tuesday, Chemistry on Wednesday, Literature on Thursday and Peace on Friday. Economics will be the following Monday.

Flagler County schools and other schools are back in session today after the three-day hiatus due to Hurricane Ian.

Editorial notebook: Palm Coast is represented in the Florida House by Paul Renner, the Republican who will be Speaker of the House in the next session of the Legislature. Good for Flagler. Renner is as sharp as he’s charming. But there are two Renners. There’s Policy Paul: fascinating, brilliant, earthy and brimming with ideas. He was the keynote speaker at the Flagler Humane Society’s 40th anniversary Sunday evening, at the Florida Agricultural Museum. One of the initiatives he spoke of for the near future is the planned preservation of a wildlife corridor through Central Florida, including Flagler, by way of buying conservation easements from farmers. In exchange, they’ll pledge to keep their lands in agricultural production: food security and environmental protection combined, because “if we pave over the entire state, we don’t get there,” he said, projecting the day when Florida has 30 million residents. That’s not too far off. But it’ll take “tens of billions of dollars” to realize that corridor. Anyway: that’s Policy Paul. He also summarized several other animal-friendly initiatives that recently became law and referred to A Land Remembered, the 1984 Patrick Smith novel of Cracker-era Florida (I am referring to the term in the book’s historical context, not as its more recent connotation). If that were the Renner we always had–like the DeSantis of the Emergency Operations Center during the three-four days of Ian–Florida would live up to its more literal name. Instead, we have Policy Paul in places, and Ideological Paul in others, where he becomes as unrecognizable as DeSantis started becoming the moment he stepped into the sun, touring ravaged communities. The ideological edge was back, the comity was gone. It’s naive of course to think it would be any other way. But the starkness of contrasts is shocking, making Carlos Lozada‘s point about so much of this being a big joke. I know I quoted him last week. The more reason to quote him again after hearing Policy Paul speak on Sunday, knowing Ideological Paul is a beat away from the next television mic: “When politicians publicly defend positions they privately reject, they are telling the joke. When they give up on the challenge of governing the country for the rush of triggering the enemy, they are telling the joke. When they intone that they must address the very fears they have encouraged or manufactured among their constituents, they are telling the joke. When their off-the-record smirks signal that they don’t really mean what they just said or did, they are telling the joke. As the big lie spirals ever deeper into unreality, with the former president mixing election falsehoods with call-outs to violent, conspiratorial fantasies, the big joke has much to answer for.”

The Live Calendar is a compendium of local and regional political, civic and cultural events. You can input your own calendar events directly onto the site as you wish them to appear (pending approval of course). To include your event in the Live Calendar, please fill out this form.

For the full calendar, go here.

The first thing you need to understand about the Hunter Biden laptop, though, is that it’s not a laptop. The FBI reportedly took possession of the original — at least if you accept the version of events promoted by those who have distributed the data, which Hunter Biden and his lawyers don’t — and all we have now are copies of copies. When it first publicly surfaced, 20 days before the 2020 election, the authenticity of the material was doubted to the degree that Twitter and Facebook effectively banned the story from legitimate political discourse. Since then, mainstream news organizations, including the New York Times and the Washington Post, have come to verify that at least some of the information contained in the cache is authentic.

It is hard to think of a single living individual who has experienced as total an annihilation of digital privacy since our devices became extensions of our consciousness. A suite of executives and thousands of employees were victimized by the Sony hack. In the iCloud hack known as “the Fappening,” nude photos of dozens of celebrities ended up on Reddit and 4chan. The 2016 hack of DNC servers and John Podesta’s Gmail exposed the private communications of a major political party. But in terms of the vastness of the data breach, the narrowness of its target, and its capacity to be deployed as a political weapon, none of those compare to the exposure of Hunter Biden’s entire virtual life.

The Cartoon and Live Briefing Archive.

Ruben Randall - August 21, 2022 0
Money
Miles Teller Net Worth Miles Teller is been so popular and successful in career. Miles Teller has earned much popularity. If you are one among...