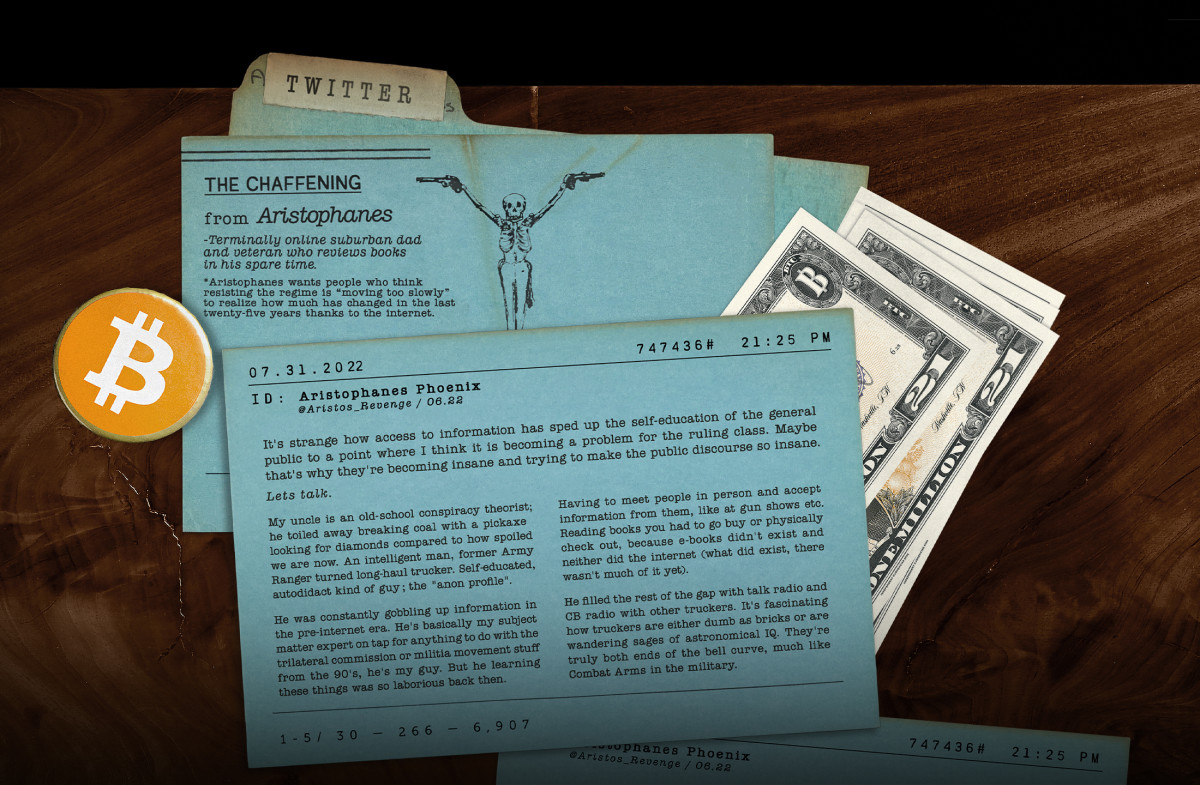 This article is the core story in Bitcoin Magazine’s “The Orange Party Issue”. Click here to subscribe now.

It’s strange how access to information has sped up the self-education of the general public to a point where I think it is becoming a problem for the ruling class. Maybe that’s why they’re becoming insane and trying to make the public discourse so insane. Let’s talk.

My uncle is an old-school conspiracy theorist; he toiled away breaking coal with a pickaxe looking for diamonds compared to how spoiled we are now. An intelligent man, former Army Ranger turned long-haul trucker. Self-educated, an autodidact kind of guy; the “anon profile”.

He was constantly gobbling up information in the pre-internet era. He’s basically my subject matter expert on tap for anything to do with the trilateral commission or militia movement stuff from the ’90s; he’s my guy. But learning these things was so laborious back then.

Having to meet people in person and accept information from them, like at gun shows etc. Reading books you had to go buy or physically check out, because e-books didn’t exist and neither did the internet (or what did exist, there wasn’t much anyway).

He filled the rest of the gap with talk radio and CB radio with other truckers. It’s fascinating how truckers are either dumb as bricks or are wandering sages with astronomical IQ. They’re truly both ends of the bell curve, much like Combat Arms in the military.

My main point I wanted to address, and other 30-something or 40-something anons can attest, is that access to information moves so fast and has become so effortless that people are going down the information waterslide at breakneck speeds.

It used to be that you were a normie, and at some point you got activated into some kind of “alternate” political or belief “tunnel” that was gatekept but a bit off the beaten path. Maybe you became a libertarian or even had a Marxist phase or something.

Eventually, that stopped being enough, maybe you became more of a generally conservative type, then a RW type, then more of an esoteric type once you get in there nice and deep. But this used to be a process that took a decade or more.

I’m seeing zoomers go from lolberts who were buying Hawaiian shirts and larping about the “boog” two years ago who are now reading esoteric and political theory books. Four years ago they were pretty close to normie, and now they’re reading Evola and Uncle Ted material.

This is also bleeding over into the real world in a very meaningful way. @MogTheUrbanite was talking earlier about how dudes at his church are just openly talking about Klaus Schwab/WEF/Great Reset shit and demons, out in the open, in a non-conspiratorial matter of fact way.

Younglings might not appreciate how utterly significant that is. I gained political awareness in an area where most people just thought George Soros was a hedge fund manager and if you said the name “Rothschild” or “Soros”, people called you some tinfoil anti-Semite crank.

For example, that live clip of Newt Gingrich literally getting yanked mid-interview for talking conspiratorially about Soros. This wasn’t even that long ago, but enough people knew by then.

Now, it’s just a household fact. This is something that is a major change when observed in a decade-long timescale. This is a big fucking change to the status quo. Information accessibility has, from the POV of traditional gatekeepers, completely spun out of their control.

That’s why suppression of conspiratorial nodes has, for the most part, capitulated. In electronic warfare terms, the enemy has switched from jamming the specific frequency their enemy is using to just jamming *all* frequencies with white noise. Just lunacy across the board.

I think this is most easily observable on the chans and specifically /pol/. Reddit had central points of moderation they could easily control. Conde Nast executives at the strategic level and subreddit moderators at the tactical level. They were easy.

But 4chan was another beast. There’s no “karma” and there’s no “downvotes” and with everyone posting anonymously, you can’t just ban the accounts that other people hold in high regard and replace them with your own. It’s “pissing in an ocean of piss”, as we used to say.

What really did the site in, and probably costs the powers that be a pretty penny, is just constant info-ops, trolling, board sliding, and stupid BBC threads. But making 4chan suck did what anons always said it would do, which is drive us off our containment site.

The chans essentially fell on the sword and lost their hermeticism that let deep autistic discussion and ops occur, which was a great loss for sure, but in doing so the “anon reality tunnel” broke the guardrails and went off-road, in every single direction, integrating with others.

It was like there was a massive, dangerous cyst that was causing problems for the host, so they popped it and infectious frogposters burst out in every direction. Covering the walls, the windows, the door, just a big nasty mess that they can’t clean up or put back in the box.

Now we’ve got zoomers speedrunning political theory that millennial anons pioneered through an experience that took almost a decade. 22-year-olds Kaczynski posting and chuckling with their friends with niche in-jokes about long dead philosophers and ancient rites. Beautiful.

I just want people who think resisting the regime is “moving too slowly” to realize how much has changed in the last 25 or so years thanks to the internet. Especially for the zoomers who just haven’t been around long enough to see it; it is crazy.

In the mid ’00s, not many people owned ARs or any other semi-automatic rifles, very few people casually owned body armor or night vision, and almost no one was training to gunfight as a casual hobby. We were all arguing “Is the Iraq War really necessary or another cynical oil play”?

That was the level of discourse then, “Is this new war necessary? Do muslims really want to destroy us? How much money is this gonna cost?” and arguments over the PATRIOT Act were akin to today’s thin blue line cult arguing with the people who want you canceled now.

Now the entire country is openly questioning, through one side or another, the legitimacy of various appendages of the government. The libs on the left are now calling SCOTUS illegitimate, while most on the right are calling 2020 illegitimate and that congress is outright corrupt.

Even if the world got a hell of a lot more clown-y generally, the general public is like four times as informed now as they were back then. It makes my head spin to really think about it. I see random contacts from IRL on my phone popping up with “Welcome them to Signal/Telegram!” 24/7.

My great aunt reads The Epoch Times, my wife talks about demons, my great grandma who is 91 thinks we’re heading for Weimar Germany, the 22-year-old who fixed an electrical issue on my stove casually talked to me about adrenochrome ffs.

There is so much awareness now compared to how there used to be almost none. There’s no such thing as “fringe” anymore, you can only be cringe. The world is fucking crazy and anything is possible.

This is great because you can’t solve a problem people don’t know exists.

There is no conquering this ideological battlespace for the regime. Conquering it *all* like they did in the days of TV and Radio is just too goddamn expensive. It’s all split up into a million different ideological fiefs. At great cost, you can conquer a fief, but not all of them.

So they fire out digital chaff frantically in every direction, they play whack-a-mole with high-engagement nodes that are or could be threats. The enemy is now reactively defending themselves, not proactively steering the course. This is the Titanic and we are the iceberg.

They’re essentially stuck in a sheared reactive OODA loop that they aren’t willing to get out of, a death-spiral of hubris and the crows are coming home to roost.

They just fucked up so bad ruining the chans, it’s like they exiled a bunch of internet green berets to every neighboring country to train proxy forces. So here we are.

If 9/11 happened today, how many Americans would question it and how many would implicate our government on day one?

Repeat that to yourself two or three times; that’s how much has changed.

If you enjoyed this thread, you can check me out at aristophanes.substack.com where I review fiction and kids books for anons and mostly *by* anons.

See also  10 Movies Where The Beginning Is The Best Bit, According To Reddit

Ruben Randall - April 12, 2022 0
TV/Movies
Birthday wishes go out to Mandy Moore, Daisy Ridley and all the other celebrities with birthdays today. Check out our slideshow below to see...