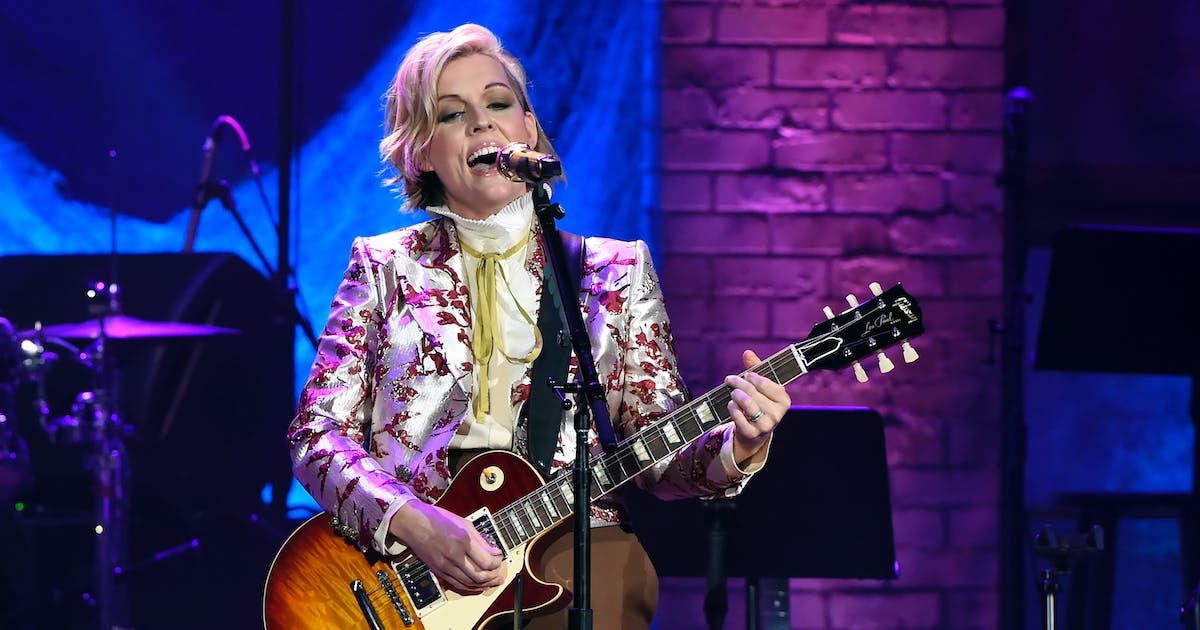 1. Machine Gun Kelly: After reinventing himself from a Kid Rock-like rap-rocker to a Blink-182-style pop rocker — and picking up an actress girlfriend and a lot of paparazzi coverage along the way — the tattooed Texan has risen to the ranks of arena-headliner status after the breakthrough success of his 2020 album “Tickets to My Downfall” and singles like “My Ex’s Best Friend” and “Forget Me Too.” His truthfully named “Mainstream Sellout Tour” features high-flying stunts, hi-fi visual production, lots of between-song banter and unfortunately some of his songs, too. “Sk8ter Boi” vet Avril Lavigne and Will & Jada’s offspring Willow open. (7:30 p.m. Xcel Energy Center, 199 W. Kellogg Blvd., St. Paul, $25-$400, ticketmaster.com.)

2. Bonnie Raitt and Mavis Staples: If they formed a duo, these Rock & Roll Hall of Famers might be known as the Soulful Singers. Kindred music makers in sound and spirit, they are guaranteed to uplift your souls whether Staples is singing gospel, freedom songs or social commentary or Raitt is moaning over love lost or firing up her smokin’ slide guitar. Raitt is touring behind a stellar new album, “Just Like That,” with songs about grace, redemption and mortality. In the ’10s, Staples delivered five impressive albums and continues to be unstoppable force of positivity. Definitely worth the drive to this splendid year-old outdoor venue for this concert. (7 p.m. Ledge Amphitheater, Waite Park, $60-$100, ticketmaster.com)

3. Live at the Hilde: This two-night bash will put to good use Plymouth’s cozy but large (5,000-plus-capacity) outdoor venue with two distinct lineups. Friday’s headliner is Texas blues-rocker Gary Clark Jr., whose guitar-hero status has given away to topical songwriter (“This Land”) and even now movie actor (“Elvis”). He’ll be joined by “Hang Me Up to Dry” rockers Cold War Kids, Suzanne Santo and Kiss the Tiger. On Saturday, Kenny Chesney’s “Half of My Hometown” duet partner Kelsea Ballerini will be joined by fellow Nashville country-pop act the Band Perry, buzzy twanger Brittney Spencer and the Devon Worley Band. (5 p.m. Fri. & Sat., Hilde Performance Center, 3500 Plymouth Blvd., Plymouth, $45-$150, etix.com)

4. Alan Jackson: Last year, the country stalwart released his 21st studio album, “Where Have You Gone,” featuring 21 tunes, including two he wrote for his daughters’ weddings. He’s a sentimentalist, traditionalist and one of the most reliable Nashville recording artists of the 1990s and ’00s. Now it’s time for his “Last Call: One More for the Road Tour,” which is a wordy way of saying farewell. Expect to hear a sampling of Jackson’s jukebox full of hits, including “Remember When,” “Chattahoochee” and “It’s Five O’Clock Somewhere.” (7 p.m. Xcel Energy Center, 199 Kellogg Blvd., St. Paul, $36-$425, ticketmaster.com)

6. Brandi Carlile: Fresh from her historic gig last weekend at Newport Folk Festival where her “friends” included Joni Mitchell, delivering her first full performance in two decades, the full-fledged star returns to the Twin Cities without famous pals. Since we were the first market to embrace Carlile, we’ve known for a long time that she’s a bona fide star. Now that she’s won a shelf full of Grammys, authored a memoir and sung on countless television programs in the last few years, Carlile finally headlines in a Twin Cities arena for the first time. Opening are Lake Street Dive, the Minnesota-named combo featuring remarkable vocalist Rachael Price, and Celisse, who has played guitar for Lizzo and Jon Batiste. (6:30 p.m. Sat. Xcel Energy Center, 199 Kellogg Blvd., St. Paul, $35.50-$145.50, ticketmaster.com)

7. Roger Waters: After a two-year wait and numerous he-said-what headlines, Waters’ This Is Not a Drill Tour literally comes with a warning: “If you’re here because you like Pink Floyd but you can’t stand Roger Waters’ politics, [bleep] off to the bar.” That admonition should come as no surprise to attendees of the outspoken ex-Floyd leader’s other recent tours, and neither will the offerings that go with the politics: A two-part show with intermission, a hi-def visual production around an innovative in-the-round stage, and lots of classic songs recast with timely messages/sermons, including many “Wish You Were Here” and “The Wall” album tracks. (8 p.m. Target Center, 600 1st Av. N., Mpls., $35-$200, axs.com)

8. Pat Benatar: Just voted into the Rock & Roll Hall of Fame, the operatically trained rocker has done a bit of soul searching of late. She’s decided last week that, with the mass shootings in this country, it’s no longer appropriate for her to sing “Hit Me with Your Best Shot.” But she’s got plenty of other hits, including “We Belong” and “Love Is a Battlefield.” Also performing is Rick Derringer, known for writing the classic “Rock and Roll, Hoochie Koo” and singing “Hang On Sloopy” with the McCoys. And the price is right for a Rock Hall of Famer – free – as part of the Great Midwest Rib Fest. (5 p.m. Mystic Lake Casino outdoors, free)

Also: Both the Psychedelic Furs and X have turned into reliably solid and spirited greatest-hits acts over the past two decades and make a good early-’80s alt-rock twofer (8 p.m. Palace Theatre, $39-$75); Canada’s big-headed electronic dance music maestro Deadmau5 returns to town on his We Are Friends Tour, featuring acts on his label such as NERO and Kasablanca (8 p.m. the Armory, $47-$87); the South Pacific-themed, tiki-lined Big Kahuna fest has turned into a farewell party for the Grumpy’s in Roseville, with Trashmen legend Tony Andreason and Deke Dickerson backed by Zippy Caplan’s Surf Dawgs, San Francisco surf-rock vets the Phantom Surfers and Wisconsin’s Swongos (1 p.m.-midnight, Grumpy’s, Roseville, $20).

Emo rocker Dashboard Confessional is touring behind his ninth album, this year’s “All the Truth That I Can Tell,” along with Andrew McMahon In the Wilderness (6:30 p.m. the Fillmore, $39.50 and up); the long-lived Iguanas put some Latin seasoning in their New Orleans gumbo (7 p.m. Hook & Ladder outdoors, $20-$36); Mick Sterling, ringleader of Twin Cities tribute bands, rocks with his own music and the Stud Brothers (6 p.m. Belvedere tent at Crooners, $35-$45).

9. The Kid Laroi: The resourceful Australian rapper/singer first gained attention with the TikTok hit “Addison Rae” about the teen TikTok sensation. Since moving to Los Angeles in 2019, he has collaborated with Juice Wrld (“Go”), Miley Cyrus (“Without You,” they did “Saturday Night Live” together) and, most notably, Justin Bieber (“Stay,” which stayed at No. 1 for seven weeks; they performed together on the 2021 MTV VMAs). After canceling a Twin Cities appearance at KDWB’s Jingle Ball in December, the 18-year-old finally kicks off his pandemic-postponed U.S. tour in Minneapolis, with the gig relocated from the Fillmore to the much bigger Armory. (8 p.m. the Armory, 500 S. 6th St., Mpls., $42 and up, ticketmaster.com)

10. Fleet Foxes: Finally in town again for only the second time in a decade, the mystical and nature-y Seattle area indie-folk strummers are sounding as harmonious and mesmerizing as ever on tour, and they have a pretty nifty light and video production to boot (teaser: babbling brooks are involved). Bandleader Robin Pecknold, whose voice is golden enough to have Post Malone recently invite him to join him on “SNL,” produced an epic album in 2020’s “Shore” and is highlighting those songs alongside some oldies and very meaningful covers. A great show to be taken outdoors on a summer night. Nigerian-rooted singer Unwade opens. (7 p.m. Surly Brewing Festival Field, 520 Malcolm Av. SE, Mpls., $50, etix.com)

Rob Hubbard contributed to this column.