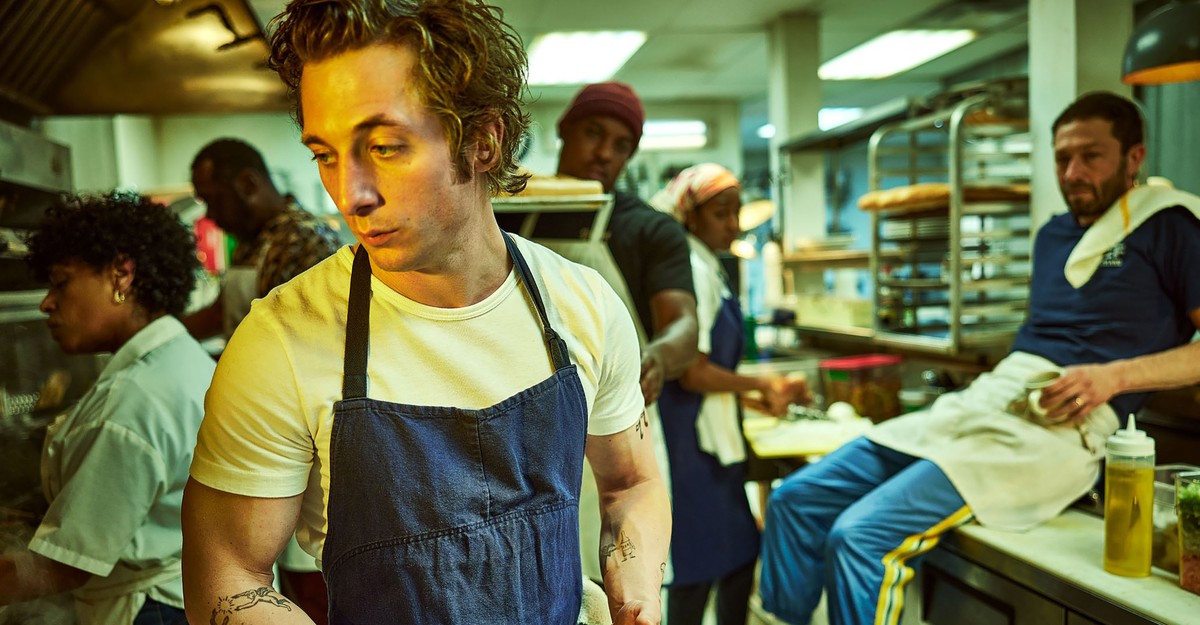 If you’ve ever spent any time working in restaurants, you know the kind of recurring anxiety dream The Bear immediately conjures: packed tables, malfunctioning equipment, orders piling up so fast that the kitchen can’t process them, frayed nerves, incipient breakdown. The new FX/Hulu series from Christopher Storer (Ramy, Eighth Grade) is the antithesis of comfort TV; it opens on frenetic chaos and gets messier by the minute. “So much yelling,” I wrote in my notes, followed by “so so much yelling.” A gun is fired in the first episode. A Noma cookbook is brandished with the physical menace of a meat tenderizer. Storer, who directs five of eight episodes, builds intensity with quick cuts between characters that capture them peeling carrots, or browning giant slabs of beef. The effect is like living through a real kitchen shift at 24x speed. The seventh episode, “Review,” is largely filmed in one long semi-sadistic take, weaving in and out of different corners of the kitchen as it implodes.

The Bear is horrifically stressful; it’s also thrilling, ambitious, funny, devastating. The show’s setup is sparse and context is doled out along the way, but it follows Carmen “Carmy” Berzatto (Jeremy Allen White), a James Beard Award–winning chef who goes home to Chicago to salvage the Italian-beef sandwich shop left behind by his brother, Mikey, who we find out in the second episode died by suicide. The mission seems insurmountable. The restaurant—the Original Beef of Chicagoland—is, Carmy learns, hopelessly in hock to meat vendors, the IRS, even a wiseguy-ish “uncle” who shows up one day and says he’s owed $300,000. The kitchen staff resent their new boss, while Mikey’s old friend and employee, the bro-child Richie (Ebon Moss-Bachrach), derides Carmy as an “Eleven Madison Park dickhead.” The Beef is so broke that Carmy has to sell off parts of his vintage denim collection to buy just enough meat to sell just enough sandwiches to make payroll.

Shows about chefs tend to focus on ego. The Netflix series Chef’s Table is a psychologically probing celebration of the kind of perverse personality required to turn food into an art form. Even gentler reality fare like The Great British Baking Show is marked by the strutting silence and performative handshake of Paul Hollywood. If The Bear has a spiritual cousin, it’s probably Anthony Bourdain, whose TV travelogues subverted the model, and whose revelations about the buccaneer antics in so many high-profile kitchens blew food writing out of the water. But the show also delves into something that Bourdain had only started to explore when he took his own life in 2018. Throughout its eight episodes, The Bear is preoccupied with masculinity, and almost anthropological in its analysis of the ways in which men and male-dominated cultures are set up to fail. What if, it seems to wonder, the qualities required for people to thrive in hierarchies—kitchens, boardrooms, small-time criminal subsets—are also poisoning those worlds from within?

From the beginning, The Bear is steeped in the merciless rituals of the professional kitchen, even if the restaurant pre-Carmy ran with less authoritarian finesse. “You cut vegetables like a bitch,” the hard-edged Tina (Liza Colón-Zayas) tells him. In a flashback, Carmy remembers a chef he trained under who flattened him daily like veal, telling him how terrible he was, how untalented, how weak, until Carmy started having panic attacks and ended up vomiting every morning before work. After he hires Sydney (Ayo Edebiri), a Culinary Institute of America–trained chef who seeks out Carmy as a mentor even as she’s mystified by his decision to pivot to sandwiches, the rest of the chefs haze her, turning up the heat on her pans or sabotaging her prep work by hiding the onions she’s methodically chopped for an hour. “It’s just part of paying your dues,” Carmy tells her. Even Carmy’s sister, Natalie (Abby Elliott), who’s nicknamed Sugar as if to signal what girls are supposedly made of, calls him a “soft, shitty bitch.”

The cruel hierarchy of a kitchen might be distinct, but The Bear slyly winks at how the structure of a “brigade,” as a kitchen’s rigid chain of command is known, mimics frameworks of power and aggression elsewhere. (“I was in a brigade once,” the chef Ebraheim (Edwin Lee Gibson) says about his time in the Somali civil war, when Carmy imposes a new, more professionalized system. “Many people died.”) One of the vintage arcade games in The Beef’s tatty dining room, which has a cult following among young men whom Richie derides as “incel-QAnon-4chan-Snyder-Cut motherfuckers,” is called Ballbreaker. When a fight breaks out one day among low-level mobsters outside the restaurant, Richie immediately goes running for his gun; by the time he finds it, Sydney has defused the tension by handing out sandwiches and introducing herself to the assembled men by name. “It’s handled,” she tells Richie, who looks perplexed—nothing in his life has ever prepared him for a world in which conflict can be mediated rather than violently shut down.

Read: The tragedy of men

As anxious as The Bear might make you feel, it’s a gorgeous show, riddled with moments of short, sharp beauty. The contrast between Richie and Sydney is one of its most intriguing features. White is endlessly watchable as Carmy, a soulful, doe-eyed sad boy with Botticelli features and arms overrun with tattoos and burn marks. (The actor reportedly prepared for the series by enrolling at the Institute of Culinary Education in Los Angeles alongside Edebiri, and training at the Michelin-starred Pasjoli.) But the show’s larger philosophical concern is whether this universe will ultimately turn out to be Richie’s or Sydney’s to claim. Moss-Bachrach, who played the rangy musician Desi in HBO’s Girls, is comically pitiable as Richie, a man with the seeming emotional breadth of day-old pizza. He screams nonstop, refuses to ask a Home Depot salesperson what kind of caulk to buy, and is furious at the world for not loving him enough. (“I was a baby too, once, Sydney,” he tells her. “Nobody gave a fuck.”)

Edebiri, in turn, shows flashes of Sydney’s anguish beneath her intentional, workaholic surface. She cares as much about food and the art of cooking as Carmy does, but doesn’t believe they have to be tainted with what she describes as “a toxic hierarchical shit show.” In the third episode, she confronts him after a brutal shift, but her words and tone are tightly modulated. She wants to provoke change, not anger. “Today was really bad for me, Chef,” she tells him. “You kinda let everybody act like trash and really kind of came at me.” He tells her he expects more from her than from anyone else, and that she has to pay her dues to succeed. “I think this place could be so different from all the other places we’ve been at,” she replies, carefully. “But in order for that to be true, we need to run things differently.” Sydney can’t believe that this is still the way the game has to be played. Richie, from his end, is incensed that after years of calcifying himself under layers of rage and performative aggression, the rules for how to win might be suddenly changing.

The Bear puts Carmy through hell as he immerses himself in his brother’s world to see how he could have missed what led Mikey to take his own life. The way out, he finds, comes by asking for help, exposing his vulnerabilities, listening, and being honest. (White has a brilliant, nearly seven-minute monologue about his brother in the final episode that encapsulates the perennial tension between professional acclaim and meaningful personal happiness.) The show ends with a revelation that feels almost uncannily like magic. I didn’t begrudge it, because it seems to set up abundant questions and opportunities for a second season, and series that are this thoughtful—this sly and tender and artful—are rare enough to be relished.

Batman Christian Bale Gave a Blatant Reason Behind Arnold Schwarzenegger Not Being Part of Terminator Salvation in 2008: “Franchise Doesn’t Need Him Now”