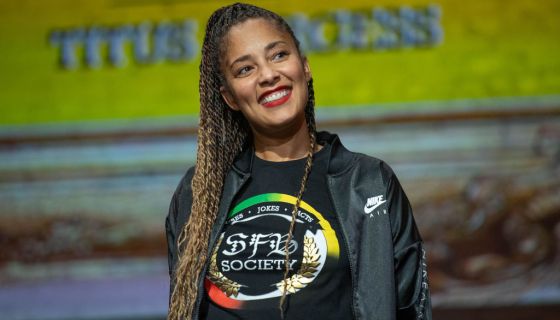 Amanda Seales is headed to the airwaves. The actress/activist has teamed up with Reach Media for her own syndicated radio show and podcast, The Amanda Seales Show. On Nov. 7, the Insecure star will rock the mic on Philadelphia’s WRNB 100.3 FM.

With Seales being such an outspoken, powerful and influential voice in entertainment, it’s only right that she has her own show.

“I am beyond excited to be partnering with Radio One and Reach Media to launch The Amanda Seales Show, she said in a statement. “After years of sticking with my brand of comedy and academy to cultivate a community, this feels like more than an opportunity, but a purpose-filled possibility to empower and change minds using humor to translate the truth.”

Reach Media, a subsidiary of Urban One, are happy to welcome Seales into the family.

“We are extremely excited to be launching a new show with Amanda Seales. A fresh show with a female host focused on the future. Amanda is a very versatile talent, excelling as a comedian, speaker, actress and social influencer,” David Kantor, CEO of Urban One’s Radio One and Reach Media divisions said.

In 2020, Amanda Seales had a short-lived stint on the now defunct The Real. When she made her exit, she took to Instagram Live to explain why The Real wasn’t real enough for her.

“I left The Real because it was breaking my spirit,” she said while live with comedian Godfrey. “I was being asked to not talk about certain things that felt like a betrayal to my people.”

She added: “And then on top of that, I didn’t want to be somewhere that I felt like people weren’t being honest with me and where people felt scared of me because of my Black woman-ess.”

She spoke about a time where her Smart, Black and Funny game segment was assigned to a white producer, which she felt was extremely tone deaf.

“I did a Smart, Funny and Black game on The Real and I was so excited to get to play my Smart, Funny and Black game on The Real,” Seales said. “They assigned it to the one white woman producer, but we have three Black women producers and one Black guy producer and I was like ‘Why are you producing this?’ and she was like, ‘So and so assigned it to me,’ and I said, ‘But why would you be producing this? You’re a white woman. You don’t understand what we’re going to be talking about.’ ”

Live Music for a Mid-September Weekend – The Aquarian