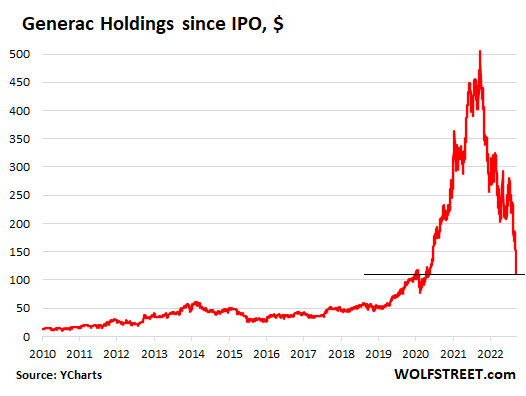 By Wolf Richter for WOLF STREET.

What’s interesting about Generac Holdings isn’t really what happened today, that the stock plunged 25% on another warning on earnings, revenue, and inventories, leaving the shares down by 79% from the peak of $524 on November 2, 2021; but that the shares multiplied by five from February 2020 through November 2021 in the first place, of which they’ve now given up all of it.

The shape of this chart is similar to a gazillion charts in my Imploded Stocks collection: It demonstrates what went horribly wrong with the markets starting in the spring of 2020, after markets had already been inflated to ridiculous levels before then. And lots of people are now getting wrung out (data via YCharts)

The chart also demonstrates that dip-buyers that weren’t lightning-fast-enough to get out of the brief but violent rallies in time, got their heads handed to them over and over again. The dotcom bubble and dotcom bust served up lots of those kinds of charts, and folks got wiped out.

Unlike some of the other outfits in my Imploded Stocks collection, this company makes real products –power generators including standby units for the residential market – and it has real revenues and profits. It has been around forever and went public via an IPO in 2010. Since 2017, revenues, aided by numerous acquisitions, roughly doubled to $3.7 billion in 2021.

But at the peak in November, the company had a market cap of $32 billion – nearly 9 times annual revenues, which is huge for any company and gigantic for a mature company that makes mundane products and that has grown through an endless series of acquisitions. The stock price was just insane.

And then on that day, on November 2, 2021, the company missed expectations on its earnings report, and that time, it used the pandemic-special excuse: supply chains. And the bloated stock price imploded by $100 in a week. Today the 25% plunge amounts to a drop of just $37.

Today, in its preliminary earnings report, it warned on revenues (up 15%, less than expected), and it slashed its guidance for Q3 net income to be down by 56% from a year earlier. The company warned about weakness in its residential product sales – consumers had bought all the generators they’d ever wanted, and now they’re flying to Europe or Las Vegas or going on cruises instead of buying generators.

And in a scary move, it warned about “higher field inventory levels and lower home standby generator orders from our channel partners than previously expected,” after Q2 inventory had already risen by 13.8% year-over-year, and after its Q1 inventory had risen by 13.4%.

See also  POLITICO Playbook: The simmering race to protect Biden on the Hill

So 11 months into this plunge now amounting to 79% of the stock price, and despite the ridiculous price spike of the shares until November 2 to holy-cow levels, and despite the serial warnings since then, 16 analysts of 22 still have a buy-rating on this stock, and only 5 have a hold rating, and none have an underweight or sell rating, according to WSJ data.

How much does a company’s stock have to drop before Wall Street analysts warn their investors with a sell-rating? -90%? This is on top of the constant hype and hoopla spread around the media and the internet. But then, anyone who still listens to it and makes investment decisions based on this hype and hoopla has it coming.

Enjoy reading WOLF STREET and want to support it? Using ad blockers – I totally get why – but want to support the site? You can donate. I appreciate it immensely. Click on the beer and iced-tea mug to find out how:

Would you like to be notified via email when WOLF STREET publishes a new article? Sign up here.

Christmas weekend things to do in South Florida Dec. 22-25