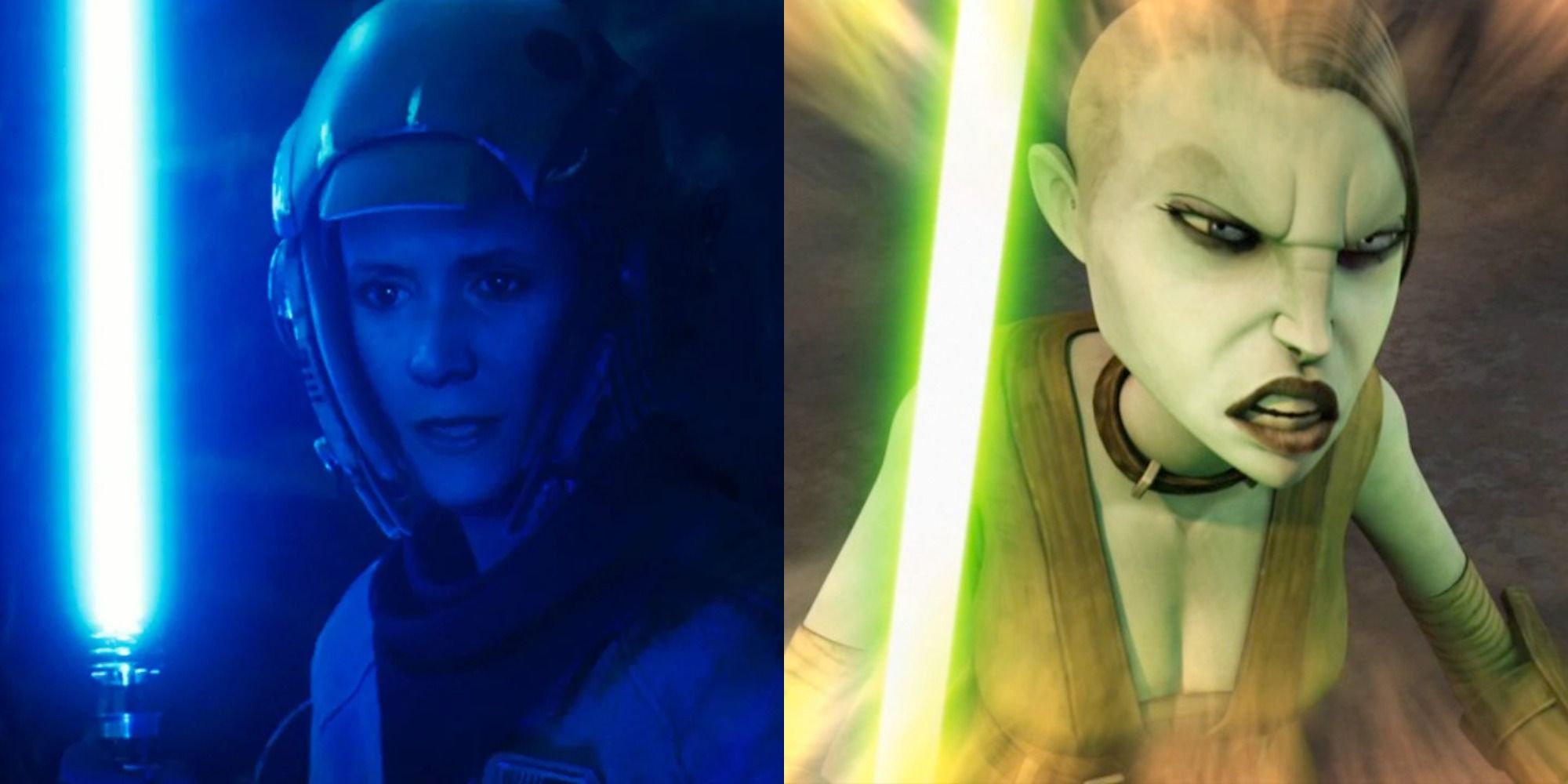 In recent years, flashbacks have become increasingly prevalent as a way to communicate essential backstory, answer mysteries, and address significant gaps in the stories of certain characters. The best flashbacks in Star Wars are those that contribute to the character development and themes of a story.

The Truth About Rey’s Parents

As Kylo Ren told Rey the truth she’d suppressed about her parents, the audience saw brief flashbacks explaining what happened. Fans got a glimpse of Rey’s parents saying goodbye before giving her to Unkar Plutt, along with her parents being murdered by the assassin Ochi of Bestoon.

While the flashbacks did help answer some of the mysteries surrounding Rey’s parentage, the flashbacks ended up providing more questions than answers.

In The Book of Boba Fett’s best episode “From the Desert Comes a Stranger,” Luke Skywalker helps Grogu remember what happened to him at the Jedi Temple on Coruscant during Order 66. For the first time since Revenge of the Sith, fans got to see a new perspective of Order 66 presented in live-action. Jedi were seen being gunned down by clones while a terrified Grogu watched the horrors unfold.

It was both heartbreaking and riveting to see the tragedy of Order 66 from Grogu’s perspective and helped provide further connectivity between the prequels and the time period of The Mandalorian and The Book of Boba Fett. However, the flashback didn’t reveal much more insight into Grogu’s character or the mystery surrounding him as fans already knew he had been at the Jedi Temple and somehow got out.

When Rey first touches the lightsaber that belonged to Anakin and Luke Skywalker in The Force Awakens, she experiences a vision through the Force. Fans referred to this as a “Forceback” as it was a mixture of flashbacks and visions.

Acting as the first flashbacks ever used in a Star Wars movie and in live-action Star Wars, it was smart to combine the flashbacks with a Force vision. There were a lot of tantalizing hints about Rey’s past and her future. Some of the flashbacks have become more fleshed out over time–such as Luke and R2-D2 witnessing the destruction of Luke’s Jedi Temple–but others, like the Knights of Ren killing an unidentified individual, still feel like they haven’t been fully explored.

Jyn Remembers Her Childhood On Coruscant

After introducing Jyn Erso as an adult, Rogue One used Jyn’s dreams to flashback to her childhood. This included scenes of her childhood on Coruscant that occurred before the opening scene of the movie, where her mother was killed and her father was taken from her.

RELATED: The 10 Best Quotes From Rogue One

These flashbacks helped show that at one point, Jyn did have a happy childhood, one where she felt loved, comforted, and protected (a stark contrast to most of her life). Seeing Orson Krennic being friends with Galen and Lyra Erso in the scene is also chilling, knowing that he will be responsible for so much death and suffering for the Erso family. The flashbacks are also exciting because they are currently the only time Coruscant has appeared in live-action since Revenge of the Sith in 2005.

The Backstory Of Asajj Ventress

“Nightsisters” is one of the best Asajj Ventress episodes in The Clone Wars that made her a more sympathetic and nuanced character. The flashbacks used in her dreams while being tended to Mother Talzin helped shed new light on her character.

The flashbacks–along with some narration from Mother Talzin–depicted how Asajj was given away to enslavers to protect the Nightsisters when she was a baby. From there, the audience also sees how Asajj was taken in and trained by Jedi Master Ky Narec, how she went on a vengeful path after he was killed, and when she first came to Count Dooku. Dooku’s betrayal earlier in the episode felt much more personal and emotional after seeing all the abandonment and loss that Asajj experienced in her life.

Seeing Luke and Leia training with lightsabers shortly after the original trilogy era is the kind of scene that fans fantasized about for many years. Seeing it brought to life in The Rise of Skywalker was remarkable.

It lent new insight into Luke and Leia’s relationship, along with Leia’s connection to the Force and her training Rey. It also lent more weight to Rey wielding Leia’s lightsaber later in the movie. Billie Lourd standing in as the younger version of Leia in the scene made it even more special.

The Night Of A Thousand Tears

The Night of a Thousand Tears and the Great Purge are referenced throughout seasons 1 and 2 of The Mandalorian, but it is not until The Book of Boba Fett that they are shown. It is haunting to watch the Empire relentlessly bombing Mandalore and then sending droids down to the surface to wipe out any survivors.

This was a classic example of how powerful it is to show rather than tell, and it was made all the better after all the ominous mentions of these events in The Mandalorian. The Armorer’s attempts to preserve the Mandalorian Way and Bo-Katan’s quest to reclaim Mandalore feel more desperate, yet noble after seeing these events. The flashbacks also helped set up season 3 of The Mandalorian, teasing what Din will face when he goes to what remains of Mandalore to try and “redeem” himself.

A Young Din Djarin Is Saved By Death Watch

After a few occasional glimpses of Din’s childhood, the season 1 finale of The Mandalorian provided a more complete flashback that explained how he became a Mandalorian foundling. When Din was a child, his parents were killed by super battle droids. Just as one of the droids was about to kill Din, the group of Mandalorians, known as Death Watch intervened, destroying the droids and saving Din’s life.

RELATED: 10 Star Wars Rebels Characters Who Survived To The End

The flashback not only showed how Din became a foundling, but made it clear why he cares about being a true Mandalorian. Mandalorians were the ones who saved him when all was lost, the ones who offered him strength, hope, and safety in the face of destruction and despair. The flashback also did an excellent job at making the super battle droids actually feel like a terrifying threat, which made Din’s distrust of droids feel more authentic.

One of the best quotes from Return of the Jedi is when Obi-Wan Kenobi told Luke Skywalker, “what I told you was true, from a certain point of view.” The Last Jedi brought this concept to life by presenting three flashbacks that depict what happened between Ben Solo and Luke Skywalker during the night Luke’s Jedi Temple was destroyed from different points of view.

Fans got to see how both Ben and Luke perceived what happened and how the mistakes they made impacted their identities and choices moving forward. It is one of the most creative uses of flashbacks in Star Wars and one that ties in with a prominent theme of the franchise.

Boba Fett’s Journey With The Tuskens

As Boba Fett slept and healed himself in the Bacta tank, flashbacks were used to revisit some pivotal moments in his life, particularly after he got out of the Sarlacc pit and before his triumphant return in The Mandalorian. The best of these flashbacks and the best parts of Boba’s character arc was his journey with the Tuskens.

After The Mandalorian began to show that the Tuskens were more nuanced than their depictions in the original and prequel trilogies, The Book of Boba Fett explored them further. Through the Tuskens, Boba learned the importance of having a tribe and being part of a genuine community, which was ultimately what The Book of Boba Fett was all about, true to Star Wars’ emphasis on the importance of found family.

NEXT: 10 Best Droids In The Book Of Boba Fett


Matthew Rudoy is a freelance writer who loves to write about his favorite movies and TV shows. In addition to Screen Rant, he also currently contributes to Dork Side of the Force. He has previously self-published two fantasy/sci-fi novels titled CORRUPTION and DESTRUCTION. While his favorite movies and TV shows tend to also fall in the fantasy and sci-fi genres, he enjoys and is open to anything that provides an engaging story, strong character development, and in-depth world-building. Matthew is grateful for the opportunity to write for Screen Rant and looks forward to continue contributing to the site.

Ruben Randall - February 19, 2022 0
Celebrity
In the book, "Lone Survivor," by Marcus Luttrell (via The Daily Beast), the former Navy SEAL detailed a number of his experiences from his...