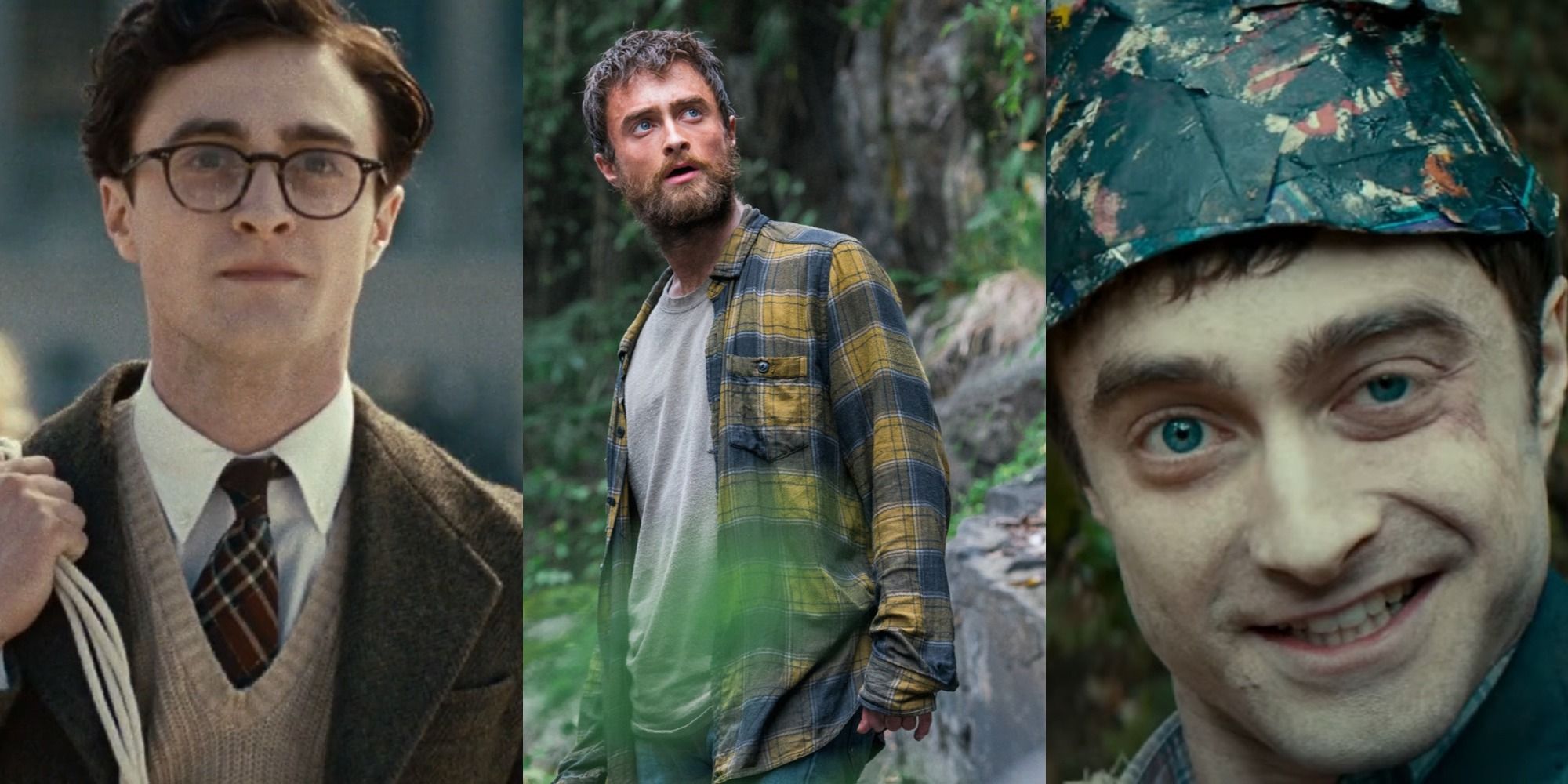 It’s safe to say that at this point in his career, the love for Daniel Radcliffe is pretty much universal. Being in the acting industry for most of his life, Radcliffe famously rose to prominence as a child star; he played the titular role in a 1999 BBC adaptation of David Copperfield aged only 10 and later made his film debut in 2001 alongside Pierce Brosnan in spy thriller The Tailor of Panama.

Radcliffe’s career has continued to flourish as he has entered adulthood, and he continually makes a point of accepting roles that prove to be deeply funny, challengingly dark, or wildly unconventional. The latest such role is that of comedy musician Weird Al Yankovic in the upcomingWeird: The Al Yankovic Story, but there are many more surprising and beautiful roles undertaken by Radcliffe that undoubtedly deserve your attention.

Horns sees Radcliffe as Ignatius “Iggy” Perrish, a man who is not only grieving the death of his girlfriend, but also dealing with the fact that everyone in his small rural town believes he killed her. Iggy wakes up one morning to find a pair of demonic horns sprouting from his forehead, and they seem to make everybody he talks to confess their darkest desires and wrongdoings to him.

It’s difficult to describe how perfectly Horns meshes black comedy, gripping drama, and otherworldly, fairytale mystique into one coherent bundle. Iggy’s mysterious powers create moments of both humor and bleakness, although most of the time, Horns is a heady mixture of both. It’s a film about finding the truth, and it’s pulling out all the stops to ensure that you constantly feel one step behind it.

Radcliffe is hardly a stranger to a bit of magic – he played the lead role of Arthur Kipps in 2012’s bone-chilling ghost story The Woman in Black. Here, though, the magic is less supernatural and more sleight of hand as Radcliffe plays Walter Mabry, an eccentric billionaire and alleged sociopath on the hunt for an elusive gadget that will allow him to access any computer on the planet.

Now You See Me 2is a fun, silly romp that might ask audiences to stretch their willing suspension of disbelief just a little too far a little too often – but all that mental exercise is more than made up for by seeing just how much fun Radcliffe is having in this wildly over-the-top role.

In 1914, Rudyard Kipling – then-famous journalist, writer, and poet – used his influence within the British army to get his son John “Jack” Kipling enlisted, despite the fact he had failed the medical exam on account of his poor eyesight.

In My Boy Jack,Radcliffe plays the title role in a movie that details the tragic series of events that ultimately led to John Kipling’s death. It’s a well-crafted period piece and a solemn warning of the dangers of allowing nationalistic furor to overtake common sense.

The Lost City tells the story of Loretta (Sandra Bullock), an author who once aspired to write historical fiction, but ended up making a career out of romance novels. Alan (Channing Tatum) is her hunky but gormless cover model, and, despite their rocky relationship, the two must fend for survival on a tropical island when Loretta ends up getting kidnapped by an insane billionaire (Radcliffe) who wants to use her archeological know-how to uncover long-lost treasure.

It’s odd to see Radcliffe play a villain after delivering such a memorable performance as the hero of an iconic piece of children’s cinema (secret agent Rex Dasher from The Playmobil Movie), but his lively and fun performance as The Lost City’s bad guy is impossible to dislike. Starting off as quirky, harmless, and even a little charming (in a posh, dorky kind of way), Radcliffe soon unleashes his acting chops to bring a fiery temper and unhinged petulance to the role that sometimes becomes genuinely frightening. One thing’s for sure – after The Lost City, your associations between Radcliffe and Playmobil will definitely be long gone.

It would be tempting to describe Jungle as a dramatization of the real-life story of a man who had a harrowing encounter with the natural world, surviving by himself in the Amazon rainforest for 3 weeks when he got lost there in 1981. According to Yossi Ghinsberg, though – the man in question, played in the film by Radcliffe – it would be wrong. Jungle is not a dramatization, because “usually, movies are bigger than life. This movie is smaller than life. Everything you see is on a smaller scale than what really happened.” So, when you see Radcliffe fight off a jaguar, or intentionally cover himself in fire ants, just know that no matter how rigidly tense you’re feeling, the reality was far, far worse.

This sinister biopic is simply a magnificent testament to Radcliffe’s talents as an actor. Scrambling muddy and desperate through the rainforest, teetering perilously far beyond the limits of both human civilization and sanity itself, Ghinsberg proved he could hold his own in the jungle – and Radcliffe showed he can certainly hold his own in this bleak survival-horror movie.

Imperium tells the story of Nate (Radcliffe), a young FBI agent who opts to go undercover in order to infiltrate a white supremacist sect and prevent a terrorist attack from coming to fruition. It is a heart-pounding and anxiety-inducing thriller, though not in the traditional sense.

With action scenes being few and far between, it’s the psychological effects of getting close to neo-Nazis and their cruel, twisted beliefs that risk getting Nate in danger and gets the audience’s pulses racing.

Released in Canada (its country of origin) as The F Word, but retitled in the US as What If? out of America’s dedication to puritanism, this movie sees Radcliffe as Wallace, a med school dropout who falls for the witty and creative Chantry only to find that she lives with her successful lawyer boyfriend. The pair decide to remain friends, but as time goes on, the attraction they feel becomes harder and harder to ignore.

What If? is a very of-its-time indie movie, charmingly twee and replete with scenes of rooftop angst and skinny-dipping on a moonlit beach. It was great for audiences to see Radcliffe trying his hand at one of his first contemporary rom-com roles (after all, 2013 saw him in a spate of historical movies such as Kill Your Darlingsand The Woman in Black), but viewers today will also notice that Wallace’s best friend Alan is played by none other than a pre-Star WarsAdam Driver. What a treat!

This film – a dramatization of frighteningly true events – tells the story of Tim Jenkin (Radcliffe) and Stephen Lee (Daniel Webber), two men who are prosecuted in 1979 by the South African government for their involvement in organized resistance against the apartheid regime. Once imprisoned, Tim begins making dozens of keys for the prison doors out of wood, and the men begin planning their escape.

Related: 10 Best Biopic Movies of the 21st Century (So Far)

Those familiar with the figures involved in Escape From Pretoriawill be pleased to know that the foregone conclusion (the real Tim and Stephen successfully escaped from prison and made it to London) does nothing to dampen the film’s white-knuckle intensity. It is made all the worse by knowing that the prison guards represent a regime that was all too real, not the product of some filmmaker’s imagination. Every creak of the hinges and every drip of sweat onto the concrete floor, keeps the audience teetering on the edge of their seat, and Radcliffe is merciless in keeping the tension building right till the movie’s very end.

Radcliffe is no stranger to roles where a pair of spectacles are an iconic part of the act – after all, his character’s short-sightedness and resultant eyewear were an integral part of the tragedy in the aforementioned My Boy Jack. Kill Your Darlings, though, sees him donning Allen Ginsberg’s signature frames, chronicling the celebrated poet’s tenure at Columbia University during the 1940s.

Radcliffe captures the spirit of the young poet impeccably as he enters an exciting new world, throwing away the old rules and plunging into pure, hedonistic self-expression. He brings an earnest likeability to Ginsberg as tensions rise between him and his new friends, and their self-indulgent wonderland doesn’t seem to provide the release nor the answers he hoped for.

And if all that sounds bizarre and nonsensical, that’s because it is; Swiss Army Manis easily the most surreal of Radcliffe’s filmography, refusing to hold the audience’s hand as it yanks them from one existential crisis to another. Though it tackles themes of alienation, social anxiety, intimacy, and love both romantic and platonic, it can be hard to work out exactly the direction it’s pointing you, or if there even is a direction in the first place. Does it have a coherent message? Or is it just asking you to sit with the contradictory mash of feelings it thrusts upon you than anything logical and concrete? We can’t say anything for certain. All we know is that Radcliffe’s performance is sublime, playing a dead body with an unquenchable zest for life as if it’s the most natural thing in the world.

Next: Daniel Radcliffe Has Written a Movie About Hollywood, and He Wants to Direct It

Ruben Randall - May 8, 2022 0
Money
DAVE Chappelle was tackled on stage during his stand-up routine at the Netflix is Joke Festival, and a suspect has been charged. Cops confirmed they...