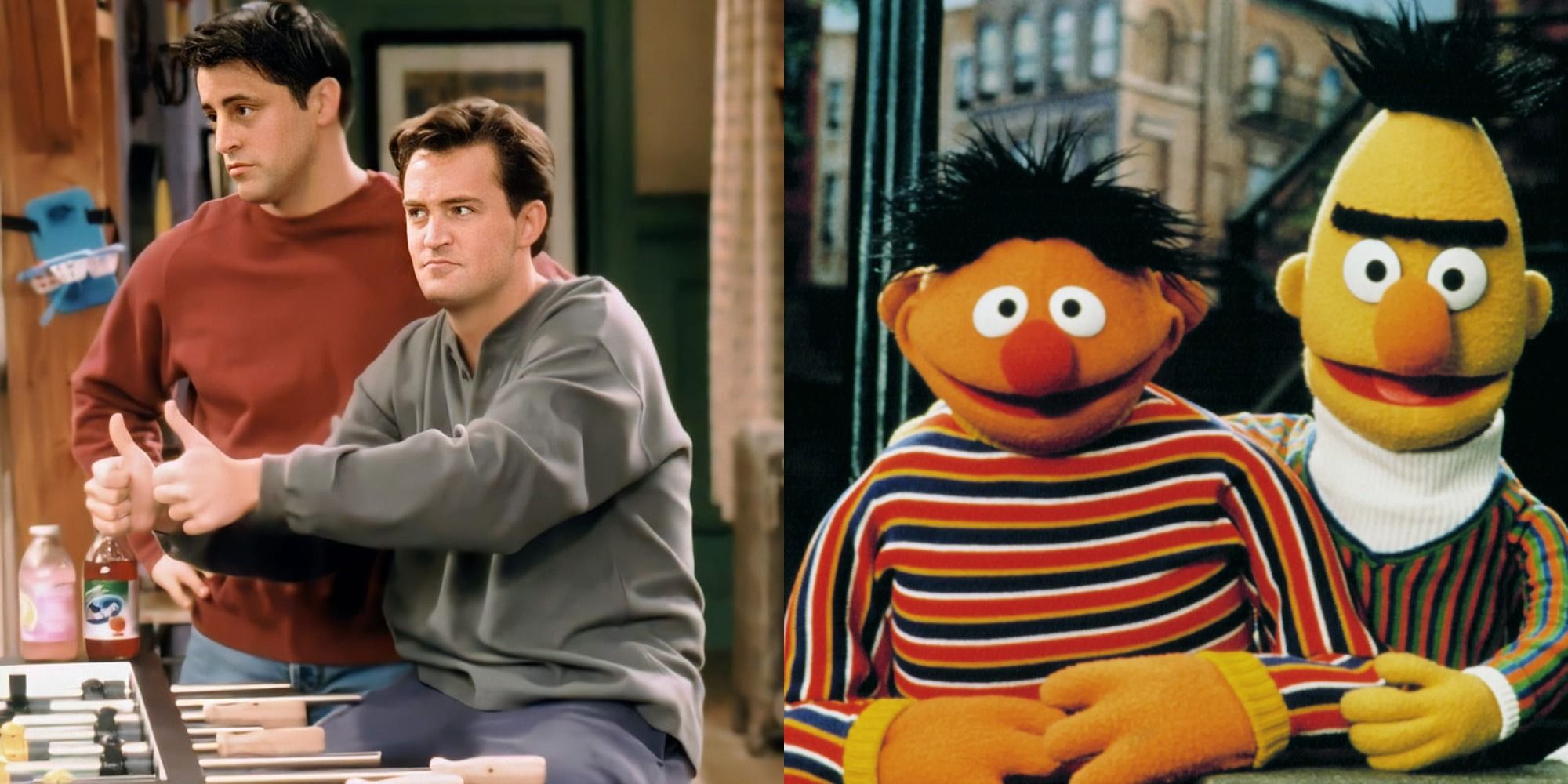 Movies may have some great bromances at the centerpiece of the movies such as The Wedding Crashers, but it’s the long-running television that has this market corner. To celebrate some iconic TV bromances, the audiences at Ranker have voted for their favorite bromances in TV history from an exhaustive list of duos and the results are interesting.

Some of the best bromances on TV lead to amusing storylines and fierce loyalty that often gets characters in troubling circumstances. The bonds formed show just as much love compared to female friendships. These bromances have provided some of the funniest and most memorable moments on TV, warming the hearts of audiences.

Audiences love the relationship between Dean and Castiel on Supernatural. Castiel was the one to pull Dean out of Hell. Dean later reminds him who he is when he has amnesia and forgot he was an angel. Castiel told Dean’s brother, Sam, that he and Dean share a “profound bond” and that’s why he came when Dean prayed for him, but not when Sam prayed.

Their relationship is based on love and care. Dean gave Castiel a mixtape of his favorite Led Zeppelin songs. Castiel caused a scene by demanding pie from a cashier because he wanted to give it to Dean. Their relationship is full of small (and large) acts of kindness to show their appreciation as they have an incredible, unexplainable bond.

Sesame Street’s Bert and Ernie are so iconic that they’ve been parodied on shows like Family Guy. The nature of their relationship has often been speculated, but they remain one of the best bromances in history. Bert and Ernie’s opposing personalities cause them to bicker. When series Bert is trying to complete a task like quietly reading, Ernie interrupts with the drums.

In one episode, Ernie cannot sleep so he likes to sing and dance himself to sleep which irritates Bert to no end and leads to shouting. Though they sleep in separate beds, they sleep in the same bedroom and audiences do not often see one of them without the other. Bert and Ernie are always a package deal.

Jake and Charles’ bromance on Brooklyn Nine-Nine has always been very loving to the point it is uncomfortable. Charles has an unnatural obsession with Jake. He loves seeing Jake happy, like when they pass Nakatomi Plaza from Die Hard, and Charles ends up taking hundreds of photos of Jake around the building.

Charles cares for Jake and slips breakfast bars into his pockets so he has something to eat. He also plans Jake and Amy’s last-minute wedding after Jake elaborately proposes to Charles to be his best man. They eventually refer to each other as brothers instead of friends. They have a very caring bromance that audiences love to watch.

Harvey and Mike are the most popular characters in Suits and for good reason. Mike set the tone for his friendship with Harvey when he outsmarted him during his job interview. They were not initially the best of friends but developed a strong connection throughout the series. The duo can keep the banter quick without missing a beat.

Their loyalty is without bounds. Though it hurt him professionally, Harvey stood by Mike when he was discovered to be a fraud. He was willing to take the fall for him, but Mike confessed to fraud first and was sent to prison. This was a huge marker for their friendship as Mike had always been supportive of Harvey.

On House, Wilson is the logical one in his bromance with House. His friendship with his coworker often comes first even when there are consequences. When House’s girlfriend left him, Wilson was there to support him, and it eventually led to his divorce from Bonnie. Wilson was also the only board member who voted to not fire House, leading to him losing his board seat and almost his job at the hospital.

House often starts conflict in their relationship. He is cynical and harsh compared to Wilson, yet their friendship endures even after House accidentally breaks his wrist and borrows tons of money for no reason. House’s friendship with Wilson is the only friendship he has been able to maintain, making their bromance memorable for viewers.

Cory and Sharn were always more like brothers than friends on Boy Meets World. Coming from a rough upbringing and broken home, Shawn relied heavily on the Matthews family. Corey was his rock during difficult times like Mr. Turner’s motorcycle accident and accompanied him on a road trip following his dad’s death. They were always there for each other.

Their differences often created conflict like when they were caught drinking and Cory’s dad accused Shawn of being a bad influence when it wasn’t his fault, but they remained inseparable through the end of the series. Shawn relinquished his best friend title at Cory and Topanga’s wedding, but audiences recognize the real best friend duo.

Friends Chandler and Joey are considered BFF goals. They hadn’t met until Joey answered an advertisement for a roommate, but they quickly became best friends. They raised a duckling and chick together and bonded over Baywatch. Joey had the honor of officiating Chandler’s wedding to Monica while Chandler had the honor of attending Joey’s first movie premiere (though he fell asleep).

They were dependent on one another. Joey depended on Chandler for rent, acting classes, and headshots as a struggling actor. Chandler depended on Joey to keep his relationship with Monica a secret until they were ready for the others to know. Their brotherly friendship always amused audiences and created unforgettable moments.

Shawn and Gus have a bromance like no other on Psych. They have been friends since early childhood and their bond is unbreakable. They share an affinity for snacks and the 80s and have hilarious whisper fights. At their high school reunion, Shawn acknowledges the lifelong friendship with Gus and what it means to him. It is a touching moment for the audience and moves Shawn’s parents to tears.

Related: The 10 Best Dramedy TV Series, According To Ranker

When Gus is stuck in a bank during an active robbery, Shawn tries to storm the bank to rescue his buddy. He attempted to sacrifice his safety for Gus because he didn’t want to live without him. This theme is repeated throughout the series, but especially during the finale when Shawn decides to move to San Francisco, so Gus decides he needs to move too.

Troy and Abed’s bromance grew over their first year in the study group on Community. Troy even refers to his bud as his other half. Troy the jock helped awkward Abed when he decided to complete a bucket list full of tasks like joining a fraternity and building a robot. They had a strong attachment which caused Abed to turn into Evil Abed when Troy had to cut ties with his friends and move into the air conditioning school dorms.

Despite their vast differences, small similarities like loving movies brought Troy and Abed together for iconic moments of the series. Abed lying about his feelings concerning Troy leaving to sail the world on Pierce’s boat is one of the saddest scenes in Community.

J.D. and Turk are the ultimate best friend duo on Scrubs. They are inseparable and always involved in each other’s lives. For instance, J.D. flew out to crash Turk and Carla’s honeymoon when he realized Turk forgot his favorite lotion. In addition, Turk regularly lies to Carla about how much time he spends with his best friend. They even had a song about their epic bromance in the Scrubs musical episode, “Guy Love”.

Like any relationship, they are not without rough patches. Turk felt betrayed by J.D. because the duo made a pact to celebrate their 40th birthdays at Disneyland together and he felt left out when his buddy went without him. Conflicts between the best friends never last long as they always forgive each other. They are truly endgame.


Chelsea Escamilla is a reader, writer, and editor based in Las Vegas, Nevada. She’s been a nail tech, cosmetologist, and now works as a List Writer for Screen Rant. A graduate from Liberty University’s English & Writing program, she enjoys watching movies with her husband and playing with her golden retriever.

Lopez bounces back to lead another Marlins win vs. Rockies | Sports

Lauren Lapkus to star in comedy Another Happy Day | Entertainment