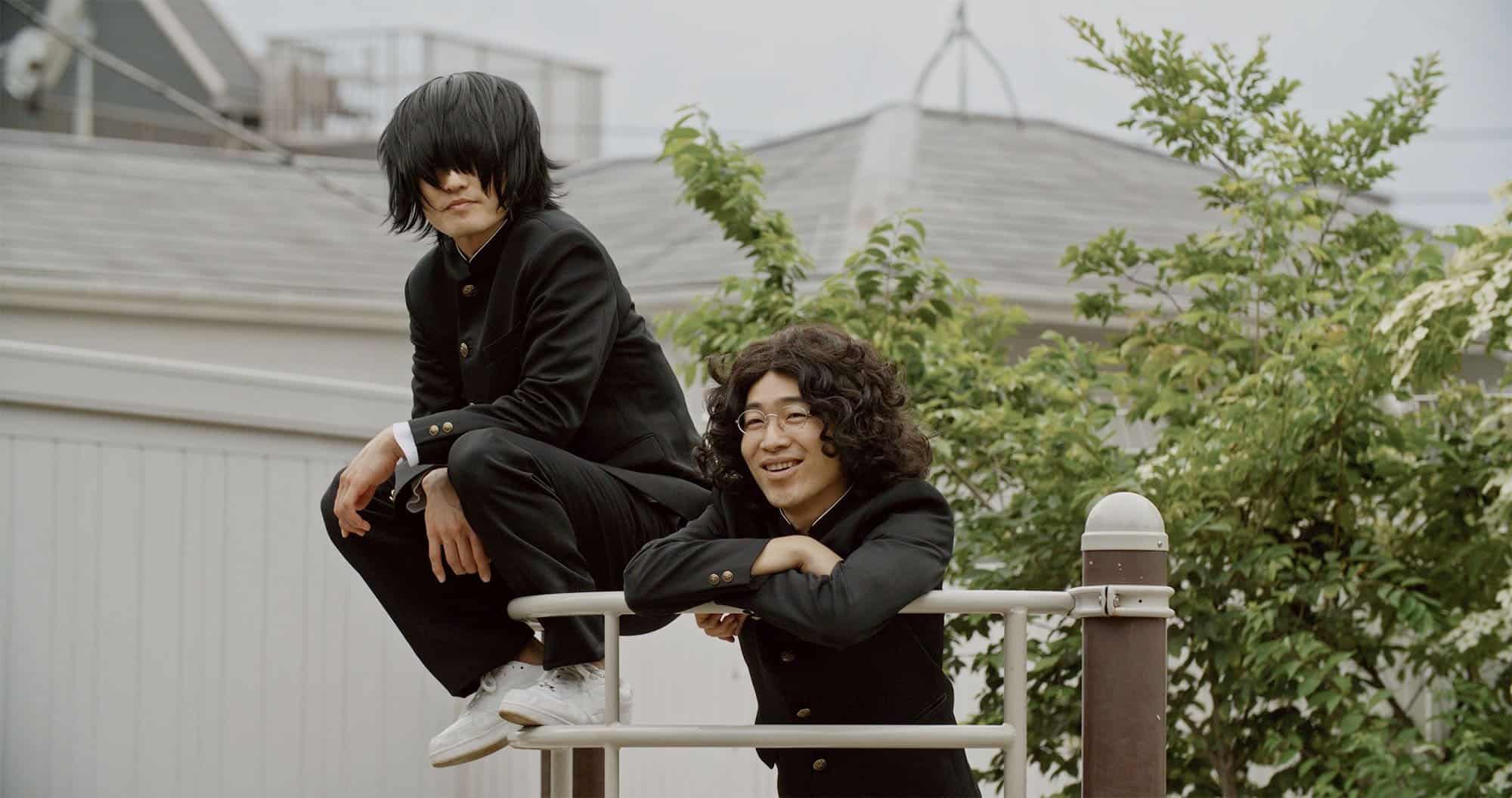 Creating a vehicle for a comedy act can often result in disappointment; taking the performers outside of their usual format to try and push them to be something they are not. But with “Thanc You”, manzai duo Jaru Jaru basically stick to what they know, working the film around their act, rather than shoehorning it into a script.

A male-female manzai act bicker about each other’s commitment to the double act; a teacher wants to disband the mountain climbing club at his school as it only has one introverted member; a hairdresser insists that his customers focus solely on him; a young man asks his flatmate to move out as his family name isn’t that of an onsen town…

Having found increased fame over the last few years due to popular, daily YouTube videos, Jaru Jaru – made up of Junpei Goto and Shusuke Fukutoku – have been pushing their act onto the big screen, with the recent “A ◦ rigato: Jaru Jaru Tower 2020”, and now working again with director Mitsuru Kuramoto. Here they play almost every character in a series of two-person sketches, switching between the straight man/gag man dynamic, similar to their social media posts.

But to hold everything together, one half of each duo has a connection to the next pairing, creating a mini-community of weird and wacky characters. There isn’t a huge narrative arc, but there is enough of one to make this more than a simple series of sketches. The young would-be mountaineer finds a fellow misfit to join the mountaineering club, eventually revealing he wants to start a band, putting on a live show with his new friend’s sister, the female half of the manzai act, with a live comedy and music finale.

Essentially, this is a love letter to the people who got them where they are today to say “thanc you” for their part. This features the sort of characters who would normally be kept on the side-lines as light relief, as obscure encounters for the leads. This, however, is a series of obscure moments and slice of life situations, making the weird and wacky centre stage.

The question is, however: are you happy to watch ninety minutes-plus of these moments, rather than a narrative? Well, as an overall film, this isn’t winning any awards, but as an entertaining way to spend an evening, this certainly wins. We don’t spend enough time with any of the characters to grow weary of them; and each sketch is played with the right balance of the bizarre versus the everyday to make us realise life can be strange at times.

Technically, there isn’t a huge amount to write about. The duo’s social media posts are played against a plain white background, letting the dialogue to the talking, so to speak. And likewise, Kuramoto keeps things simple, with no particular flourishes or special effects. Indeed, the only real extravagance is in the hair and make-up department, with some interesting wigs put to use.

A stand-out routine is the trainee magician who keeps getting his tricks wrong, with an inspired joke that works well in the wider context. The ending, however, does maybe leave you wanting a little more; not resulting in anything particularly clever or unexpected to finish with a bang. It’s all just a little bit nice.

Ruben Randall - July 25, 2022 0
TV/Movies
TEEN MOM fans have noticed that Kailyn Lowry covered up her stomach in baggy clothes again amid rumors she's pregnant with a fifth child. The Teen...