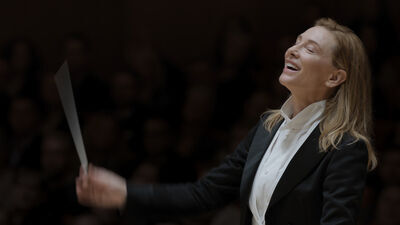 I was reminded of a recording made in the 1980s by the Dadaist sample-based music group Negativland, in which they bemoaned: “Is there any escape from noise?” In our world, as in the world of this film, as it happens, the answer is “No.” Or perhaps “Not entirely.” Lydia Tár’s world—conjured with incredible agility and grace and mystery by Field in his first feature film in 16 years—is one in which the near-impossible escape is attempted via music. Specifically classical music, and more specifically classical music that aspires to sublimity.

Played with fierce and seamless commitment by Cate Blanchett, Lydia Tár is one of the wonders of the classical realm. She is a virtuoso pianist, an earnest ethnomusicologist, and a purposeful popularizer—she is apparently a member of the EGOT club, which isn’t a common achievement for a classical person. And as a protean conductor about to conclude recording a cycle of Mahler symphonies, Lydia needs to get away from noise to do the work to which she almost stridently commits herself.

Is applause noise? In the movie’s opening scene, a nervous Lydia walks out onto the stage of a concert hall to rapturous tribute. She’s not there to perform, but to be interviewed, as a feature of one of those culture festivals major metropolitan centers hold every so often. Her interviewer is New Yorker writer Adam Gopnik, who plays himself in a performance possibly lacking in self-awareness—the gleam in his eye as he interviews Lydia is one of an inveterate, serenely self-satisfied know-it-all. The exposition here sets Lydia’s cultural status in a kind of stone, so the viewer looks forward to a film that will show how the sausage, so to speak, is made.

Lydia is a busy person. She has a quiet, glum, efficient assistant named Francesca (Noémie Merlant) whom Lydia addresses with less warmth than most humans would apply to Siri or Alexa. Francesca watches from a distance as Lydia, in an advanced conducting seminar at Juilliard, passionately and profanely riffs against aspects of identity culture after one of her students proclaims with flat banal arrogance that as a queer BIPOC they can’t get with Bach, on account of the composer’s patriarchal lifestyle. As she prepares to leave New York for her base in Berlin, where she’ll be recording the last symphony in her Mahler cycle, the Fifth, she lunches with a fellow conductor, Elliot Kaplan (Mark Strong), who gossips with her like a peer but who clearly envies her. She tells him of her plans for the Berlin orchestra, including “rotating” an older colleague whose ear isn’t what it used to be.

MOVIES: An Oscar worthy performance, plus films with angry music and literate creations