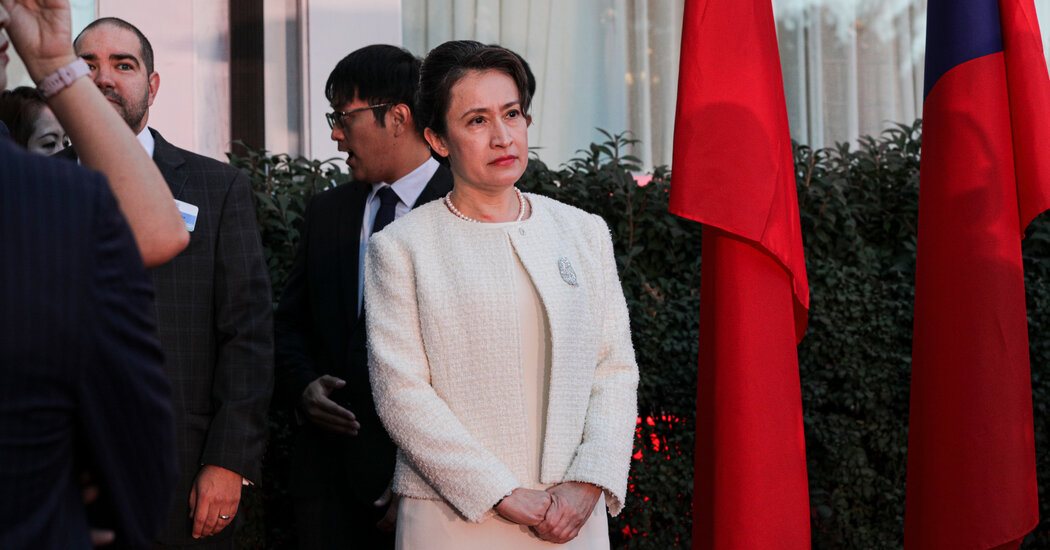 WASHINGTON — She is among the most influential foreign ambassadors in Washington, but she’s technically not an ambassador. She works from a grand estate, but cannot live there. Simply flying her flag could cause a diplomatic incident.

This is life in the gray zone for Taiwan’s senior diplomat in the United States, Bi-khim Hsiao, who enjoys powerful insider access but endures a peculiar outsider status.

She speaks almost daily with senior Biden administration officials and is wired into leaders of both parties in Congress. “Taiwan has one of the most effective diplomatic representations in Washington of any country,” said John R. Bolton, a former national security adviser in the Trump White House.

And yet because the United States does not officially recognize Taiwan as an independent country, Ms. Hsiao does not work under the graceful title of ambassador. Instead, she is the Taipei economic and cultural representative. Instead of an embassy, her office is known as the Taipei Economic and Cultural Representative Office, or TECRO.

Those unwieldy phrases are an outgrowth of America’s 1979 “one China policy,” under which the United States agreed to shift its recognition from Taipei to Beijing as the legitimate government of China and promised not to formally recognize Taiwan as a sovereign nation. China considers Taiwan an illegal breakaway province.

The result is one of official Washington’s more contorted diplomatic customs, and one that increasingly amounts to a fiction as Beijing’s growing threats of forcibly reclaiming Taiwan drive Washington and Taipei closer politically, economically and militarily.

Chinese officials watch closely for any deviations from the policy, studying the nature and location of interactions between U.S. and Taiwanese officials to see whether America might be treating Taiwan more like an independent country.

In an interview at Taiwan’s Twin Oaks estate, a sumptuous compound in the heart of Washington, Ms. Hsiao acknowledged her difficult balancing act. In a play on the “wolf warrior” label for China’s new breed of aggressive diplomats, she called herself a “cat warrior.”

“Cats can tread on tight ropes and, you know, balance themselves in very nimble and flexible ways,” she said.

Ms. Hsiao has a quiet, reserved manner, but Beijing sees her as a dangerous agitator. When Speaker Nancy Pelosi made a high-profile trip to Taipei in August, China accused Ms. Hsiao of engineering the visit, which prompted Chinese military exercises and pushed U.S.-China tensions to dangerous new extremes.

A Chinese government spokesman condemned her as “a pawn of the foreign anti-China forces” who was “pushing Taiwan compatriots into a dangerous abyss,” according to Beijing’s China Daily newspaper.

Even as it draws closer to Taiwan, the United States treats its relationship with Taiwan’s representatives carefully. The State Department issues special red-and-blue license plates to diplomats in Washington, but the ones Ms. Hsiao and her colleagues are granted carry slightly different markings, omitting the word “diplomat.” When Taiwanese officials visit Washington, Biden administration officials meet them not at the White House or State Department, but at the Rosslyn, Va., offices of something called the American Institute in Taiwan — an organization created, funded and staffed by the U.S. government to serve as a middleman. Official letters between the two governments are also passed through the institute.

Such concerns might seem to pale in comparison with the major arms sales the Biden administration has approved for Taiwan. In December, President Biden signed a defense-spending bill that authorized up to $10 billion in military aid for Taiwan over the next five years. But earlier last year, the White House pressed Congress to drop Senate-approved language modifying TECRO’s name to the Taiwan Representative Office. The difference was enough to prompt a formal protest from China’s Embassy in Washington.

At the center of it all is Ms. Hsiao, 51. Raised in Taiwan by an American mother and a Taiwanese father who was a Presbyterian minister, Ms. Hsiao moved to Montclair, N.J., in her teens and attended Oberlin College before earning a master’s degree in political science from Columbia University.

She draws much of her influence from her close relationship with Taiwan’s president, Tsai Ing-wen, who represents Taiwan’s pro-independence Democratic Progressive Party, and for whom she once served as spokeswoman. In addition, Ms. Hsiao counts Mr. Bolton and Mr. Biden’s top National Security Council official for Asia, Kurt Campbell, as decades-long friends.

How Times reporters cover politics. We rely on our journalists to be independent observers. So while Times staff members may vote, they are not allowed to endorse or campaign for candidates or political causes. This includes participating in marches or rallies in support of a movement or giving money to, or raising money for, any political candidate or election cause.

For years, U.S. officials prohibited Ms. Hsiao’s predecessors from visiting the White House and the State Department. Such guidelines have relaxed over time, and she now pays regular, if discreet, visits to the West Wing and Foggy Bottom.

She is an undisguised regular on Capitol Hill, as when she sat next to Kevin McCarthy, then the House Republican leader, last summer for a livestreamed discussion by his caucus’s China Task Force. “She really does have the confidence of people here in Washington,” said Bonnie Glaser, a China expert with the German Marshall Fund who has also known Ms. Hsiao for many years.

Seated in an elegant reception hall at Twin Oaks, with a grand piano and floor-to-ceiling windows overlooking a rolling lawn, Ms. Hsiao described her position as “legally unofficial.”

For that, she blames Beijing. “The Taiwanese resent not only being bullied, but we resent being told that we cannot have any friends,” she said.

It helps, Ms. Hsiao said, that appreciation in Washington has grown “for Taiwan as a democracy, as a force for good, and as a true partner of the United States.” At the same time, she said, the threat from a Chinese government that talks of absorbing Taiwan weighs heavily.

Officially, Ms. Hsiao is based in TECRO’s drab office building, across the street from a McDonald’s in suburban Washington. But she conducts much of her official business at Twin Oaks.

The property has a story of its own. Its neo-Georgian mansion was built in 1888 as a summer home for Gardiner Greene Hubbard, founder of the National Geographic Society. In the late 1930s, it became the Chinese ambassador’s official residence.

When China’s nationalist leaders fled to Taiwan after China’s 1949 Communist revolution, they kept control of the property. Madame Chiang Kai-shek, the glamorous wife of Taiwan’s founder, stayed there during her visits to Washington to build support for the fledgling nation, which the anti-Communist United States recognized as China’s only legitimate government.

Then Nixon took his famous trip to China in a Cold War gambit to split Beijing from Moscow. China’s price for normal relations with the United States came with a condition: No more recognition of Taiwan. By 1979, the Carter administration had enshrined the “one China” policy, choosing Beijing over Taipei.

To many Taiwanese, it was a betrayal.

“We didn’t think it would end this way,” Taiwan’s last official ambassador to the United States, James C.H. Shen, told a New York Times reporter in the mansion’s reception hall before his final trip home in December 1978, as embassy aides wept.

To keep Twin Oaks from the communists, Taiwanese officials sold the property for a token price to a conservative foundation co-founded by Senator Barry Goldwater of Arizona. After Congress passed legal protections to ensure that China could not seize the estate, the foundation returned it to Taiwan.

But the State Department imposed conditions to make clear to Beijing that Taiwan was not re-establishing its diplomatic presence. The estate could not be used as a residence, and Taiwan’s flag could not fly over its grounds. A sign at the gate reads only “Twin Oaks,” with no mention of Taiwan.

Her main annual event is Taiwan’s national day, which hundreds of guests attended last year on Oct. 10, eating, drinking and taking selfies next to an ice sculpture of Taipei 101, the tallest building in Taiwan. They included members of Congress, foreign dignitaries and several former U.S. officials, among them the Trump administration’s top State Department official for arms sales.

Notably absent was anyone from the Biden administration. For years, executive branch officials were prohibited from visiting Twin Oaks under State Department guidelines that Mr. Biden relaxed. But senior officials are discouraged from attending events, like Taiwan’s national day, with any whiff of sovereignty.

Many other informal restrictions have fallen away. U.S. officials used to meet with Taiwanese counterparts in neutral locations like hotels or the American Institute in Taiwan’s Washington-area offices, across the Potomac River in Virginia.

Mr. Bolton recalls meeting with a visiting official from Taipei during the Trump years — not in his West Wing office but in a White House annex. The Chinese Embassy complained anyway. “I’m accommodating enough not to meet with him in my own office,” Mr. Bolton said. “The Chinese wanted me to go to Lafayette Park,” outside the White House.

But Ms. Glaser of the German Marshall Fund warns that symbolic victories may not be worth the cost of provoking China. “I support the administration’s approach, which is to really focus on doing things that meaningfully strengthen Taiwan’s security,” she said.

“People say, don’t put symbolism over substance. But the bottom line is, this is a fight over symbolism,” said Dan Blumenthal, a China expert with the conservative American Enterprise Institute. “The Chinese are trying to wipe the idea that there is a government of Taiwan off the map, and they are doing that by going after the symbols of Taiwan’s existence and legitimacy.”

Ms. Hsiao admits being frustrated over the continued tiptoeing around her formal title and who can attend what meeting in which place. But she says she understands the U.S. position.

“We don’t at all blame the United States,” she added. “We blame the bully that’s threatening everyone, that is creating such conditions.”