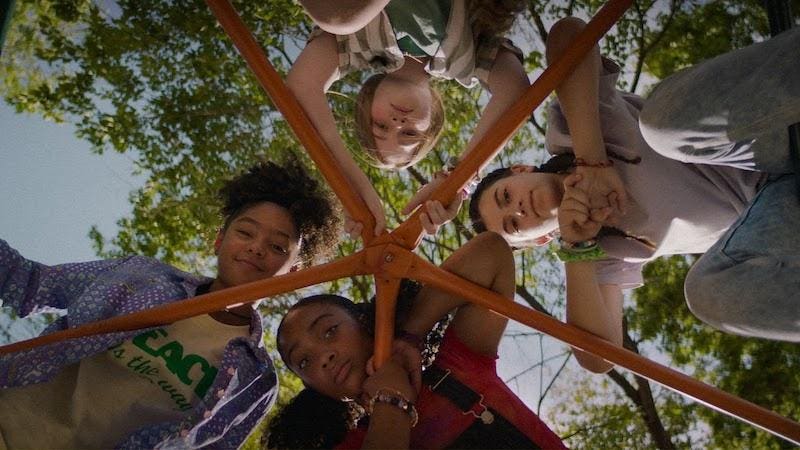 Summering, directed by James Ponsoldt (The Spectacular Now), explores the last days of summer for four 11-year-old girls as they work together to unlock a mystery. Co-written by Ponsoldt and Benjamin Percy, the nostalgic film uses the girls’ discovery of a dead body to bond them together in their final days before starting middle school.

Daisey (Lia Barnett), Dina (Madalen Mills), Mari (Eden Grace Redfield) and Lola (Sanai Victoria) have been best friends since starting elementary school together. On their last weekend together before embarking on middle school, they find a body in the woods and make a pact to learn what happened on their own. The film also stars Lake Bell, Sarah Cooper, Ashley Madekwe, and Megan Mullally.

I spoke to Ponsoldt about why it felt important for him to make a coming-of-age film with female protagonists. We also discussed what was important to him to get right about the nature of female friendships and what he hopes Summering will bring to viewers.

Risa Sarachan: What gave you and your co-writer Ben Percy the idea to write Summering?

James Ponsoldt: Becoming a parent (I have three children) changed the way I look at stories – certainly stories with young protagonists. The same is true for Ben. Summering really stems from conversations between parents and children, trying to understand where they’re each coming from—not always successfully, but still trying.

There’s a longer story, but the short version is: a man was found dead near my home, and he couldn’t be identified. To not even receive the dignity of being named upon death felt like a troubling signifier of something larger that is fundamentally broken. I had conversations with friends and family – including my children – about issues related to justice, personal responsibility, and death.

Ben and I began talking about these issues 15 years ago when I adapted a short story of his called “Refresh, Refresh” that originally appeared in “The Paris Review.” My adaptation was turned into a graphic novel by the artist Danica Novgorodoff, which was ultimately selected by Alison Bechdel for Best American Comic 2011. So in some ways, Summering felt like a continuation of a longer, ongoing conversation between Ben and me about children and structural violence.

Sarachan: When I think back to the coming-of-age films I grew up with, none of the protagonists were girls. Why did you make that choice when writing it?

Ponsoldt: I could find a lot of surrogacy in the coming-of-age films I grew up watching. There were characters that looked like me and thought like me. I don’t think we fully realize how conditioned we all are to male subjectivity. It’s a source of enormous privilege for men, but I think it’s the kind of privilege we ought to question. My wife, my mother, and my sister didn’t have that same privilege. So in some ways, this story is about expanding access for them. But it’s also an attempt to explore what we all gain from more robust female subjectivity in the stories we tell. In conversations with my daughter (and conversations my co-writer had with his daughter), we really sought to dignify girls’ and women’s inner lives and create a story around female-centered friendship. These seem like pretty necessary perspectives to me if we hope to fully account for the impact of violence in our world.

It’s something I’ve thought about a lot throughout my career, from my thesis film in graduate school – which was about a single mother (played by Janeane Garofalo) and her young daughter – to later films and TV shows I’ve been fortunate enough to direct with brilliant female leads like Mary Elizabeth Winstead, Lizzie Olsen, Emma Watson, Shailene Woodley, and Riley Keough.

Sarachan: What was important for you to get right about young female friendships?

Ponsoldt: It was important that the characters’ perspectives – their hopes, fears, anxieties – feel grounded and relatable. And I didn’t want their friendship to be defined by hurting each other – or someone else victimizing them. Summering is – among other things – a platonic love story between four friends. They happen to be at an age – right after elementary school, before middle school has begun – when their personal relationships with death and loss are not the same, and they use different tools – like imagination – as a coping mechanism. But the fear of losing their friends is palpable and real. As is the case with many of the children I know (some of whom I live with), kids can radically swing between innocence and total world-weariness. Sometimes day to day.

The script for the film was a living document and many of our amazing female collaborators, like producer Jen Dana, cinematographer Greta Zozula, casting director Avy Kaufman, costume designer Marie Schley, music supervisor Tiffany Anders, and composer Sofia Hultquist offered their insights on it, both from the perspective of parents as well as remembering back to their own childhoods. The many suggestions and comments we received were helpful in assuring authenticity.

Sarachan: Summering touches on some of the more stressful aspects of being this age. Did your cast help inform you about some of the anxieties kids now encounter?

Ponsoldt: Yes. We talked constantly. The cast was amazing in sharing their personal experiences as well as larger issues in the world around them. I heard concerns expressed about uncertainty, change, fitting in, and approval. They often used their imaginations as a tool to help cope with fears. They’re brilliant, insightful, and very funny. It was a continuation of conversations I’m having all the time – I’m a parent of three children and my wife works at a 6th-12th grade school. My co-writer also has children. So the conversations between children and parents – about fears, anxieties, and all the impossibly hard questions facing kids and families these days – are a part of my daily life.

Sarachan: What was the process of creating this film during COVID?

Ponsoldt: We all knew how lucky we were just to get to make movies again, so folks were incredibly diligent about following safety protocols during pre-production and production. I think the restrictions echoed some of the themes of the film. We talked a lot about family and friends we hadn’t seen in some time and about personal safety and health (both physical and emotional). But as glad as we were to work again, it was interesting how many of our cast and crew brought their families with them to Utah. I think it reflected this time we’re in when people are re-evaluating their relationships to work and family. We don’t want to be apart from the people who matter to us—and that’s very much a theme in the film.

Between COVID, fires taking place in surrounding parts of the western U.S. during the summer of 2021, and the sweltering heat, questions that are central to the film – like what does the future hold, and is everything going to be okay – felt very real. I was grateful to be surrounded by such an incredible cast and crew as we went on this journey.

Sarachan: What do you hope your viewers take away from this film?

Ponsoldt: I hope viewers see themselves in the young protagonists, that they might remember being 11 or 12, on the cusp of adolescence. Or perhaps they’ll relate to those characters’ parents – trying to help support their children, trying to encourage independence, while also perhaps projecting their own anxieties. But I mostly hope people see a portrait of friendship that contains fear, love, hope, and all the scary emotions that rise to the surface when you feel like your world is changing.

This interview has been edited and condensed for clarity.

Summering is out in theatres August 12th.

‘House of the Dragon’ star Olivia Cooke says she had a ‘full mental breakdown’...