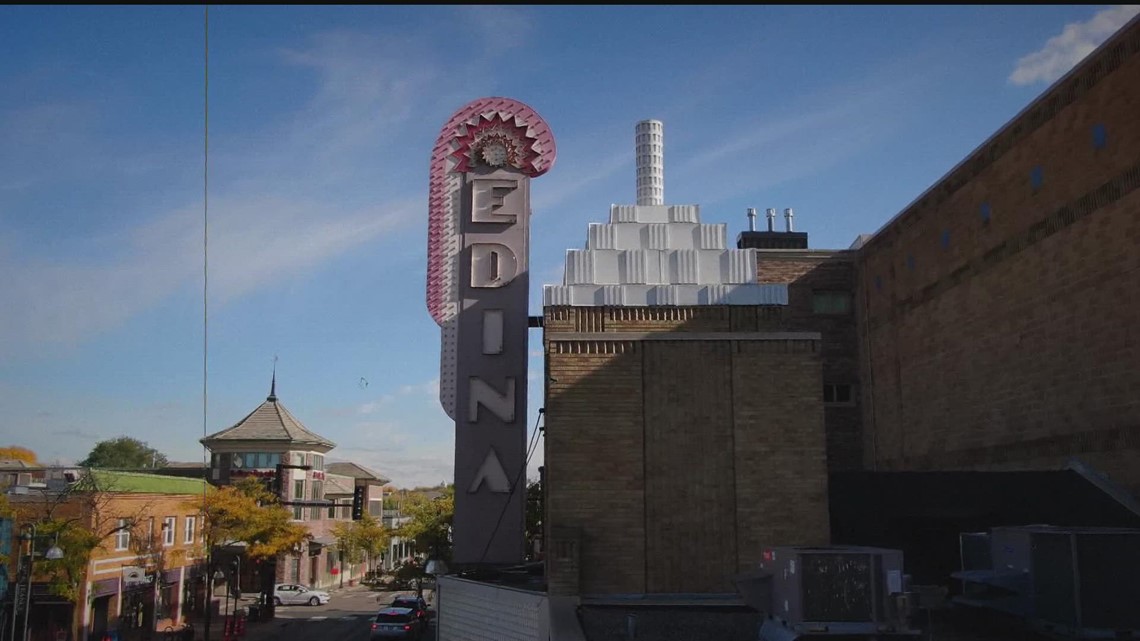 In addition to heated recliners and other new amenities, the Edina Theatre features stunning photo ops for fans of the horror classic.

EDINA, Minn. — Buying an old movie theatre — in need of a lot of renovation — could have been the beginning of a pandemic horror story.

But instead of running away from it’s purchase of the historic Edina Theatre, Michelle Mann and her family decided to embrace the story line.

“Throughout this remodel, we’ve emulated The Shining,” said Mann, co-owner of the family-run business that now operates eight Minnesota theatres. “I’ve never seen a movie theater do that in the country, and so we really wanted to make something special and unique.”

Shortly after walking into the old theatre in 2021, Mann says she and her brother, Michael, realized that the third floor concession stand had a similar layout to the famous “gold room” bar from the 1980 horror classic.

A year later, the entire third floor has been transformed with gleaming gold details that will transport fans of the movie.

The feeling continues in other areas of the theatre as well.

The red and white bathrooms also look like they are straight out of the movie, and several walls depict life-sized scenes — and props — from the movie.

“They are physical, Instagrammable installations,” Michelle Mann said. “We want movie-goers to have fun, take a photo and make memories here.”

She says all the attention to detail also represents a strategic shift at a time when all theatres are looking to find new ways to bring people back to theaters.

“Movie going has definitely changed a lot, but that’s specifically why we wanted to make this movie theater a destination,” she said. “We’re back about 80% of what we were pre-pandemic and we just want to give people more reason to get out of their homes and be back with people.”

That mission also extends to the movies they choose to show.

“We’re going to do a mix of art house, independent and blockbusters,” Mann said. “We really want to bring in a new audience that is all around this area but that Landmark (the previous owner) just did not do before, which is families.”

It’s a fitting goal for a family, and a place, that has come full circle.

“There’s photograph in the lobby of my father Steve and his father Marvin when the Marquee fell in the tornado of 1981,” said Mann, referencing the period of time when her family first owned the theatre. “So to look back around how many years later and the three of us owning it – my brother, myself and my dad – is just an honor.”

Watch all of the latest stories from Breaking The News in our YouTube playlist:

Daniel Dae Kim only agreed to be Fire Lord after the fans “blessed” –...