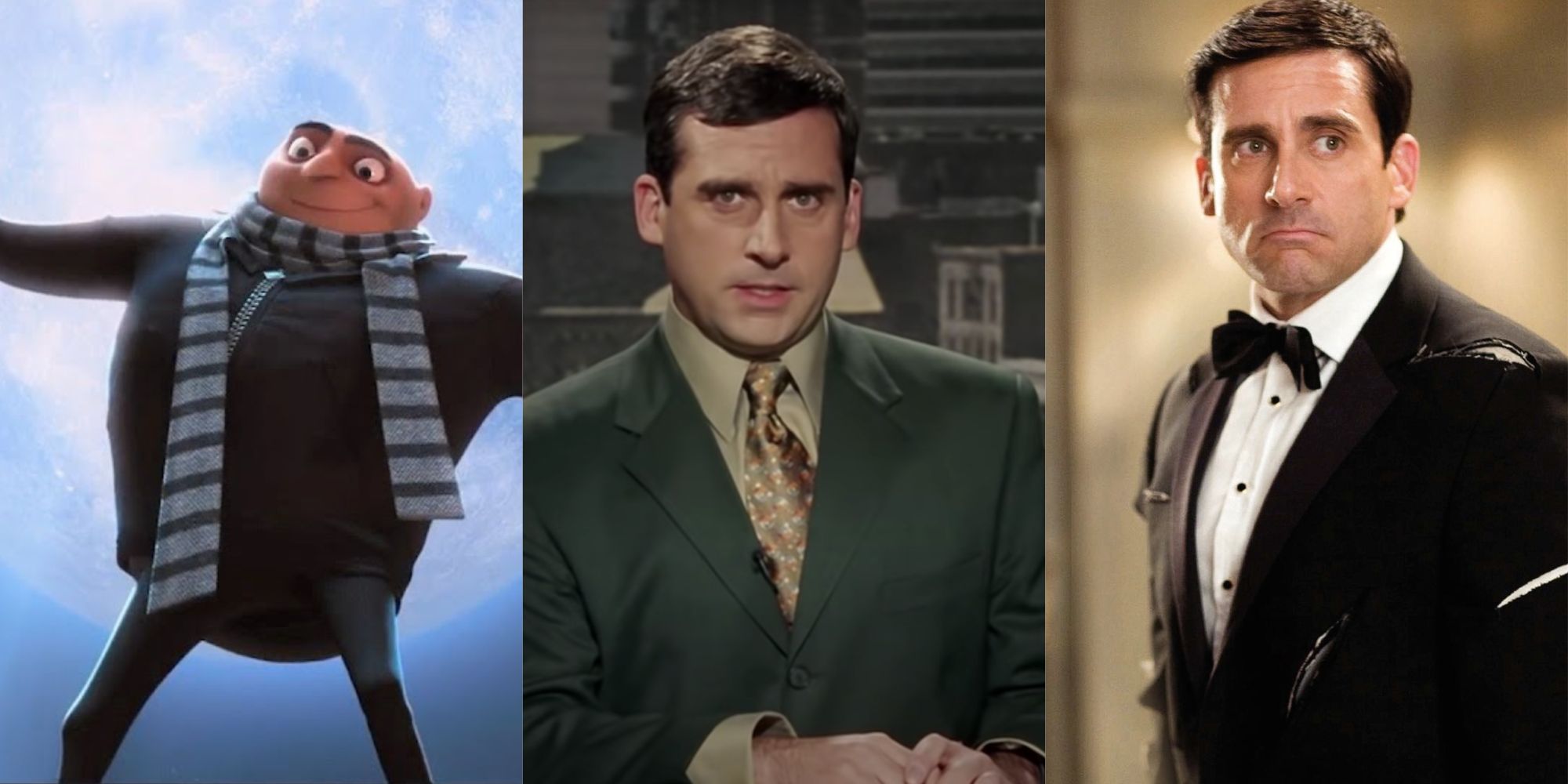 Steve Carell returned to animation with Minions: The Rise of Gru, where the actor voices the younger version of Felonius Gru. The film had a record-breaking premiere, continuing Carell’s golden run with the series. The actor also has a number of other hits in the bag in his career.

These range from his first onscreen role in Bruce Almighty to his starring role in films like Get Smart. Steve Carell is one of the major A-list actors and comedians, and it’s interesting to see which films have helped him reach this level. It’s also a good way to check out how audiences worldwide responded to his biggest successes.

Steve Carell had established himself as an A-list actor by the time the Anchorman sequel came around, but returned for his supporting role as the lovable doofus Brick Tamland. The story sees the news crew led by Ron Burgundy attempting to make a name for themselves in New York City.

With a $171 million cume, Anchorman 2 outgrossed its predecessor to become a hit (according to Box Office Mojo). The film’s success was primarily due to its domestic performance, doing as much as $125 million worth of business in the U.S. market by the end of its run.

Generally seen among the best movies to star Steve Carell, the actor really made it big with The 40-Year-Old Virgin. Carell starred as Andy Stitzer, a shy middle-aged man who meets the love of his life but is worried about how she’ll react if she learns he’s never been intimate before.

The 40-Year-Old Virgin was released at a time when raunchy romantic comedies were taking off and grossed $177 million worldwide (according to Box Office Mojo). It put Carell on the map as a leading star in his own right, with the film still considered a modern comedy classic.

Get Smart is a film with an ironic title, seeing as barely anyone in it actually behaves in a smart manner. Carell starred as the protagonist, Maxwell Smart, a low-level analyst who finally gets the chance to prove himself on the field but gets trapped in a comedy of errors.

Get Smart was promoted as a vehicle led by Steve Carell and the actor didn’t disappoint, with the film grossing an impressive $230 million (according to Box Office Mojo). Carell brought his brand of physical comedy to the role and audiences worldwide were attracted to cinemas to check him out as the unlikely secret agent.

Steve Carell reunited with Jim Carrey for Horton Hears a Who!, with the two playing the Mayor of Whoville and the titular Horton, respectively. The story is about an elephant who finds a speck on a flower that is home to the people of Whoville – he then goes on an adventure to find a safe place for the speck to inhabit.

Horton Hears a Who! isn’t the biggest success for an animated film, but its $298 million gross was good enough for it to be a commercially viable release (according to Box Office Mojo). Carell and Carey’s star power also contributed to the positive word of mouth that Horton Hears a Who! received.

Over the Hedge features an ensemble voice cast including Bruce Willis, Avril Lavigne, William Shatner, and more, with Steve Carell voicing Hammy the Squirrel. The film is about a selfish raccoon who tricks a group of animals to steal the food he needs to deliver to a bear.

Over the Hedge appealed to its young demographic to gross $340 million (according to Box Office Mojo). Carell received praise for bringing the hyperactive Hammy to life, going on to voice him again in the short film Hammy’s Boomerang Adventure.

Bruce Almighty continues to be seen as among the best movies with Steve Carell, mainly because it was the first film to star the actor in a significant role. Jim Carrey plays the titular protagonist as he receives powers from God to look after Buffalo, New York, during which he learns the importance of taking responsibility.

Bruce Almighty grossed an appropriately mighty $484 million, becoming one of the year’s biggest successes, and still remains Steve Carell’s highest-grossing live-action movie (according to Box Office Mojo). Carell’s character, Evan Baxter, brings a lot of comedy, so much so that he got his own spin-off, Evan Almighty.

Steve Carell became part of his most commercially successful series with Despicable Me, voicing main character Felonius Gru. Despicable Me is about Gru’s adoption of three girls to use for his evil plans before growing to genuinely love them to turn over a new leaf.

Despicable Me became a big hit upon release, as fans worldwide particularly loved the Minions that Gru surrounded himself with. The film grossed $543 million to kickstart the franchise that is still going strong over a decade later (according to Box Office Mojo).

Minions: The Rise of Gru is currently one of the best animated movies of 2022, depicting the younger days of Gru when he began his villainous career. The sequel to the hugely popular Minions has taken off just as well, with audiences worldwide turning out in droves.

Minions: The Rise of Gru is still flying high, grossing over $800 million as of yet with plenty more gas in the tank (according to Box Office Mojo). Carell was credited with pulling off voicing an 11-year-old without compromising on his comedic timing.

The second installment in the Despicable Me series reformed Gru completely, as he became an agent to foil the plans of another supervillain. The film was praised for humanizing Gru further, with the character falling in love with his handler to complete his newfound family.

With a gross of $970.8 million worldwide, Despicable Me 2 was a blockbuster upon release that overcame the loftiest expectations (according to Box Office Mojo). With a gross of over $600 million in international markets, the series had established itself as a powerhouse vehicle for Steve Carell.

Shaking up the series’ formula, Despicable Me 3 brought Gru’s long-lost twin Dru into the fold, also voiced by Steve Carell. Rather than suffer any franchise fatigue, Despicable Me 3 outgrossed its predecessor in both the domestic and international markets.

Despicable Me 3 ended with a final gross of $1.034 billion, with $770 million coming from international releases (according to Box Office Mojo). Steve Carell was lauded for doing double duty as Gru and Dru, and the presence of the Minions made for a perfect combination that made magic at the box office.

NEXT: 10 MCU Villains The Minions Would Be Great Underlings For