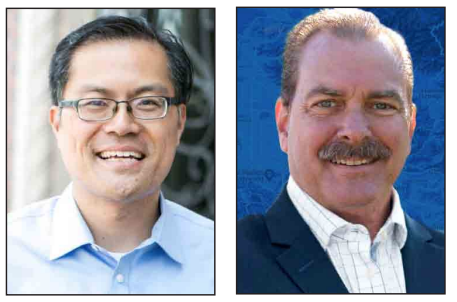 A special election will be held on Tuesday, Feb. 15, in the 49th Assembly District to fill the seat vacated by Assemblymember Ed Chau, who left to become a Los Angeles County Superior Court judge.

Chau, a Democrat, represented the district — which has one of the country’s largest concentrations of Asian American voters, 56.5 percent — from December 2012 to December 2021. His predecessors include Democrats Mike Eng and Judy Chu (now a member of Congress). Democrats outnumber Republicans in the district, 45 percent to 19 percent.

Vote centers will remain open every day from 10 a.m. to 7 p.m. for in-person voting or to drop off completed vote-by-mail ballots. All centers will follow COVID-19 health and safety guidelines.

The Democratic candidate is Mike Fong, a member of the Los Angeles Community College District Board of Trustees and director of policy and government relations for the Los Angeles Department of Neighborhood Empowerment. He previously served as East Area director for Los Angeles Mayor Antonio Villaraigosa.

In 2017, Fong was among 13 candidates, including 10 Democrats, for the 51st Assembly District seat that was vacated when Jimmy Gomez (D) was elected to Congress. Fong finished fifth; the winner was Wendy Carrillo (D).

“Mike has devoted his career to public service, and has fought for progressive policies that deliver real results for the people he serves,” Fong’s campaign said in a statement. “As an elected trustee on the board of America’s largest community college district, Mike works to increase student access to higher education, expand workforce training, and improve the quality of educational opportunities available at nine community colleges across Los Angeles and surrounding cities.”

The Republican candidate is Burton Brink, a retired sergeant with the Los Angeles County Sheriff’s Department. He has run for the Assembly seat twice before, in 2018 and 2020, losing both times to Chau.

The winner will serve the rest of Chau’s term, which ends in December. In order to remain in office, Fong or Brink would have to run again in the November general election.

“California is the greatest state in the country, but far too many of our neighbors are still struggling,” Fong said. “If I am elected to the State Assembly, I promise to work every day to house the unhoused, protect our environment, create economic prosperity, and level the playing field through policies focused on equity and opportunity.

“California is our home, and we should always welcome those seeking a better life. I believe I have the experience and progressive values to work towards that goal in the State Assembly, and to build on the great work of Assemblymember Ed Chau. I would be honored to have your support, and to fight for the residents of the 49th District.”

Brink’s campaign said in a statement, “Over a period of 40 years, Burton Brink has served the San Gabriel Valley, starting as young as 14½ as a police explorer at the Arcadia Police Department. He became a reserve police officer in Monterey Park, and retired as a sergeant after 29 years with the Los Angeles County Sheriff’s Department.

“Being a leader in the Sheriff’s Department allowed him to take part in forging change and instituting improvements. Burton recognizes we need change here in California, on a large-scale level. He has consistently proven his commitment to doing the right thing for every resident in the community.

“Burton believes we all have the right to exercise personal choice when it comes to our health. Getting the vaccine is a decision that should be made in consultation with one’s doctor, not forced on Americans by the government.”

Ruben Randall - June 28, 2022 0
Actress
As the talk show The Real ends, the show gave special shoutouts to all of its hosts—past and present. But one former host wasn’t...