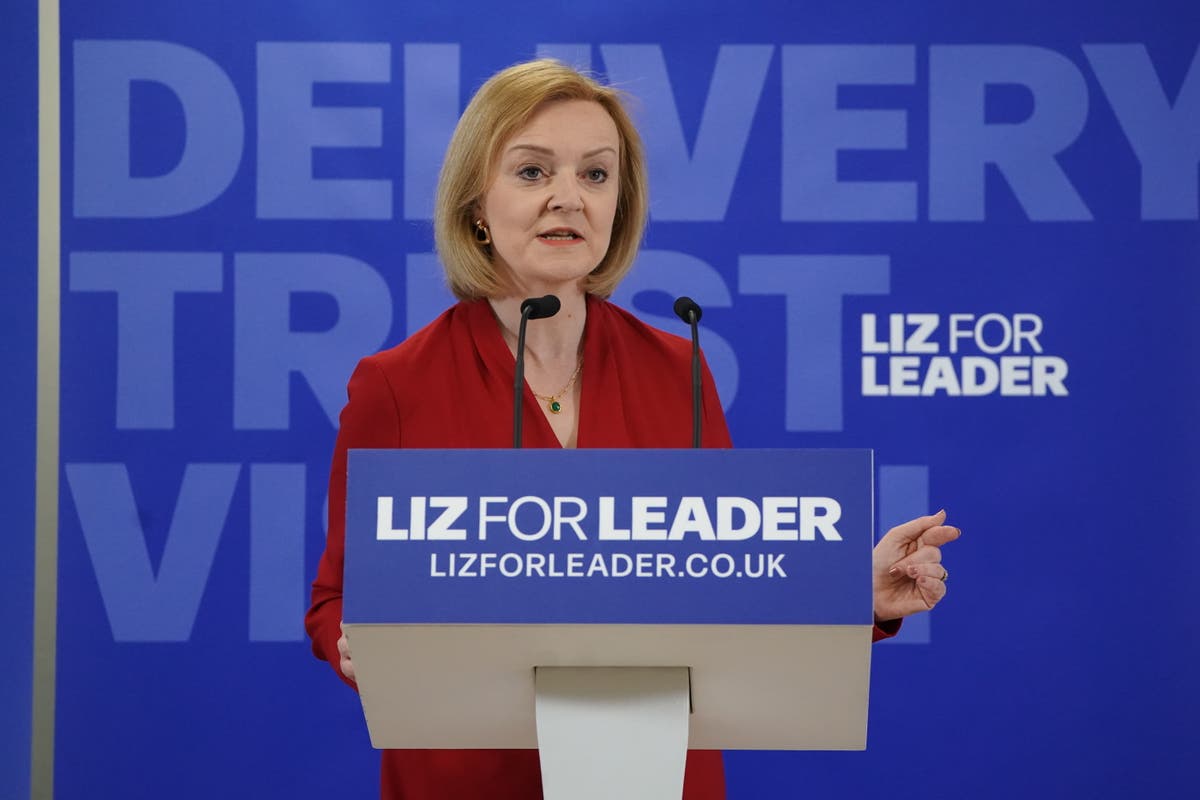 Liz Truss said that “some Scots love” her as she said she would strengthen the case for the Union by making “people’s lives better” across the UK during a hustings.

The Foreign Secretary ruled out holding a second referendum on Scottish independence, while rivals Penny Mordaunt and Rishi Sunak said the issue was not their priority when asked about it in a Spectator podcast.

Ms Truss said she is a “child of the Union”, highlighting her upbringing in Paisley in Scotland and in Leeds when quizzed about how she would make a positive case for a United Kingdom as Prime Minister.

Probably some Scots love me, I can tell you that

Asked if the Scots love her, she replied: “That’s a question for Scots. Probably some Scots love me, I can tell you that.

“But the important point is not about how many meetings we have and how many visits we do – which of course are important and it’s an important part of ministerial life – is what we actually deliver for people.

“And are people’s lives better, do they have more opportunity?”

Frontrunner Mr Sunak said he would try to make an “emotional argument for the United Kingdom from the heart, as well as the practical argument for it and demonstrating it”.

Ms Mordaunt said the Union would be held together by “the shared mutuality, it’s our history, it’s our culture”, and called for the revival of the UK Theme, an orchestral arrangement played by the BBC until 2006.

“It sounds a trivial thing, but actually it was so loved by everyone across the four nations,” she said.

The trade minister also attacked what she called the “dreaded” BBC, describing it as “a much loved institution but doesn’t sometimes seem to love the country back”.

Asked whether the contest has damaged the Tory brand, Ms Mordaunt said “we’ve not been helped by some of the TV formats”.

“Now more than ever we’ve got to restore some positivity and some professionalism to what we do,” she said in an apparent criticism of the often bitter race.

Ms Truss, who is being backed by Boris Johnson’s most loyal allies, insisted the party’s brand is “in a positive place”, adding: “I’m not in any way saying what’s gone on has been perfect”.

Mr Sunak said putting a team together is “by far and away the most important priority at the beginning and how we will bring people together and serve the British people to the best of our ability”.

He refused to say whether his Cabinet would include Ms Truss and Ms Mordaunt.

“I’ve been particularly careful as I assume the others have been as well, not to get into the business of starting to talk about specific jobs and specific people,” he said.

Ms Mordaunt pledged to have a “tighter cabinet”, saying: “It’s currently crazy how anyone could make a decision with two football teams in that room”.

On tax, the issue that has dominated the race to replace Boris Johnson, Ms Mordaunt criticised “the current trajectory Rishi’s set us on”, while rejecting the tax cuts proposed by other contenders in favour of “targeted measures”.

She said: “We’re not going to be able to make some of the cuts that other candidates earlier in this contest put forward.

“What we do need to do is to grow the economy, and we need to help people who are really in dire straits”.

Ms Truss, whose tax-cutting promises have been criticised by former Cabinet minister David Davis as having “gone a bit far”, insisted they were “affordable”.

She said: “I am very clear it can be paid for within the existing fiscal envelope. The taxes that I’m cutting cost £30 billion, that is affordable.”

She also vowed to “have a thorough review of tax and simplify our taxes”.

All three said they support the Online Safety Bill but expressed concern over the protection of freedom of speech.

The hustings took place on the eve of the final round of voting by Tory MPs to choose the two candidates to be put to the party’s membership in the race for No 10.

Ruben Randall - August 16, 2022 0
Actress
EXCLUSIVE: Robyn Lively is set to play Sara Bellum and Tom Kenny will reprise his role as the Narrator in the CW’s live-action reboot...