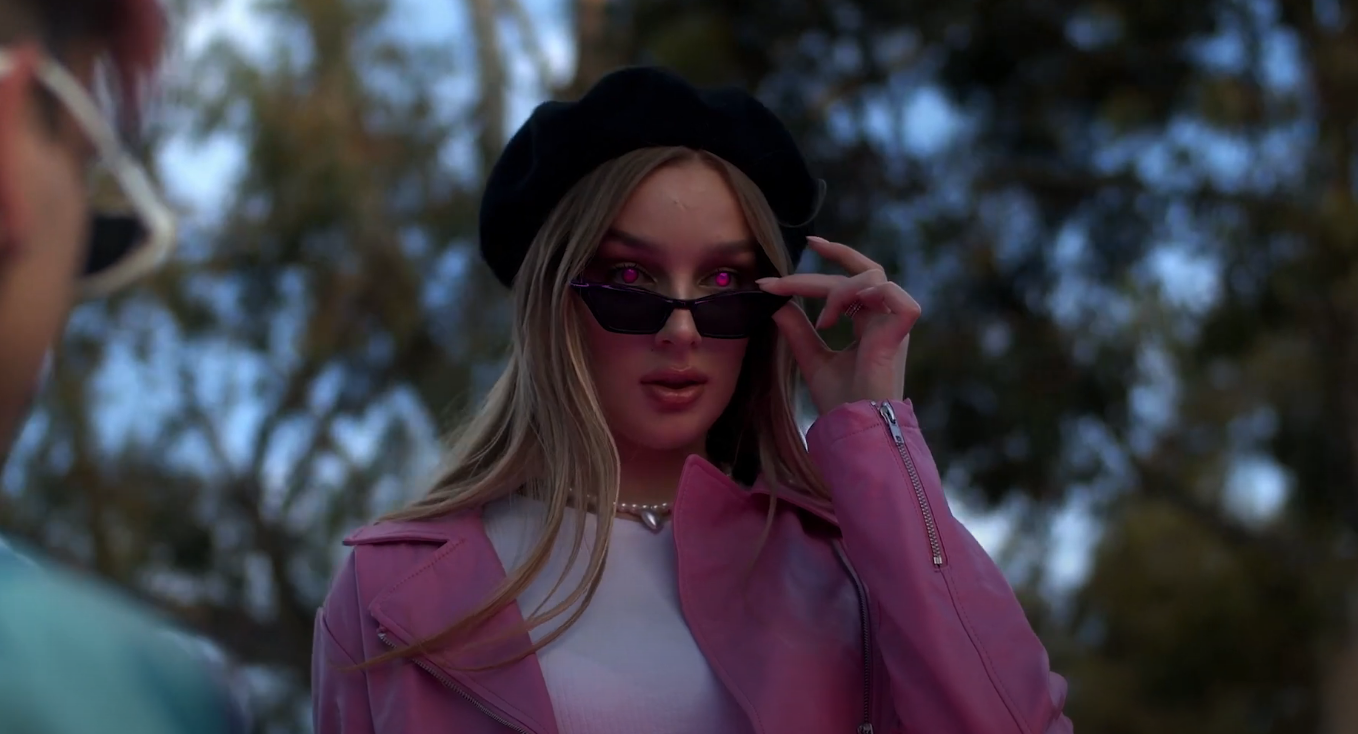 ‘So Vam,’ currently streaming on Shudder, is a passionate debut feature by Alice Maio Mackay. One of the characters in ‘So Vam’ has a line addressed to the protagonist that goes like, ‘So much passion, so little control.’ Perhaps this was a disclaimer born out of the matured self-awareness of the young writer-director. Perhaps, it was not. Either way, that sentence could be used to describe ‘So Vam’ perfectly.

Mackay, seventeen years old and a transgender girl herself, does not lack the necessary passion required for this queer vampire horror film. However, the horror part does not always work as seamlessly as she perhaps hoped due to an understandable lack of experience. But, the earnestness of the story underneath the garb of a horror film is palpable. Conviction, here, essentially negates the inexperience. Just like her protagonist, Mackay is also on an upward learning journey, armed with a passion for her identity and love for cinema.

Kurt (Xai), a teenage boy aspiring to become a drag queen, do not have it easy in a fairly conservative Australian suburb. His transgender desire has been a source of mockery, ridicule, and physical abuse from people he meets daily. Although not unloving, his father (Brendan Cooney) is not particularly warm towards him and prefers Kurt’s older brother, even though the older brother is probably a rapist. Kurt’s only solace comes in the form of his sole friend, Katie (Erin Paterson). Katie often protects Kurt from abuses, especially in school, from a gang of three queerphobic girls who do not waste a single opportunity to attack Kurt.

However, with her part-time job in a bowling alley and a family to look after, Katie can’t protect Kurt everywhere. On one of those unprotected nights, Kurt gets attacked again. This time by a predatory vengeful vampire, Landon (Chris Asimos). Landon’s vicious attack would have killed Kurt if not for the timely arrival of April (Grace Hyland) and Harley (Ethan McErlean), two ‘young’ vampires. April and Harley are not like Landon. They do not attack innocent humans; instead, they prey on bigots and neo-nazis—people who bully others. You get the drift.

Kurt, saved by April and Harley, now becomes a vampire himself. Once the shock wears off, Kurt starts to hang out with April’s clan. He even meets a guy with whom the attraction is mutual. Andy (Tumelo Nthupi) is another young vampire and recent addition to April’s clan. With this newfound sense of belonging, Kurt reclaims his old life confidently. He stops being bullied and starts to retaliate. He even takes Katie into confidence and tells her about the entire ‘Vam’ twist of fate.

But, all the while, dangers from Landon loom large over Kurt and his friends. Landon even ‘recruits’ the three girls that used to bully Kurt. To hurt Kurt even more, one day, he stages an ambush and kidnaps Katie. In the kerfuffle, Kurt also gets speared by one of the bullies with a wooden stake, the weapon that kills vampires.

It is understandable why Mackay chose vampire horror as her choice of medium to present a story of isolation based on identity. She even incorporates the reasoning in one scene. The queer undertones of Bram Stoker’s Dracula are discussed elaborately in one scene. The premise allows Mackay to explore the societal tendencies to fear and thus shun any sort of outlier activities by branding them monstrous.

Alas, there are certain pitfalls that she could not avoid. The subtlety and delicacy required to channel a commentary under a story, especially a story of a different genre, must be worked upon. It presents the big problem of ‘So Vam.’ Its horror identity. The ‘horror’ mask the film adorns to tell a story about queer pride is too generic to be impactful. It makes one wonder if Mackay should have chosen not to have any mask.

Because her camera and ‘So Vam’ soars when it is devoid of any horror tropes. The scenes of drag performances, especially Kurt’s end, are shot brilliantly. Bolstered by impassioned voiceovers, those scenes show the mettle of ‘So Vam’ and Mackay. Even the writing is much better in these soliloquies than in the casual conversations that take the story forward. The quite apparent lack of inexperience in the acting department also did not help the film’s cause.

But, as I said before, despite all the failings, it is hard not to be swayed by the film’s earnest appeal. The innocence and joy of filmmaking to effuse about things that matter most is quite something. The film’s heart is that sense of belonging, which would ask you to look past the inconsistencies.

So Vam Ending, Explained: What do the Vampires represent?

After getting stabbed by a wooden stake, Kurt is saved by Andy. But Katie still remains kidnapped. Landon’s reputation makes Kurt fear for her life. It culminates in a final showdown between Landon’s clan and April’s clan, including Kurt, Andy, and Harley. The good vampires finally win, and Landon is vanquished.

Kurt and Andy start to spend more time together, possibly even live together. After this, Kurt tells his father the truth, and his father also starts to be more affectionate toward him. Kurt’s dream of becoming a drag performer also succeeds as he presents a grand performance, dressed magnificently.

The good ones like April’s clan and the vampires represent the Pride community. Kurt gets confidence only when he gets enrolled in the vampire gang. The clan helped him be more acceptable to his own truth. Something that even Katie and his father could not make him, despite loving him. The clan helps its owner find that place to be confident in their skin. It comes from solidarity, which comes from similarity. That is why, to Kurt, the clan is influential.