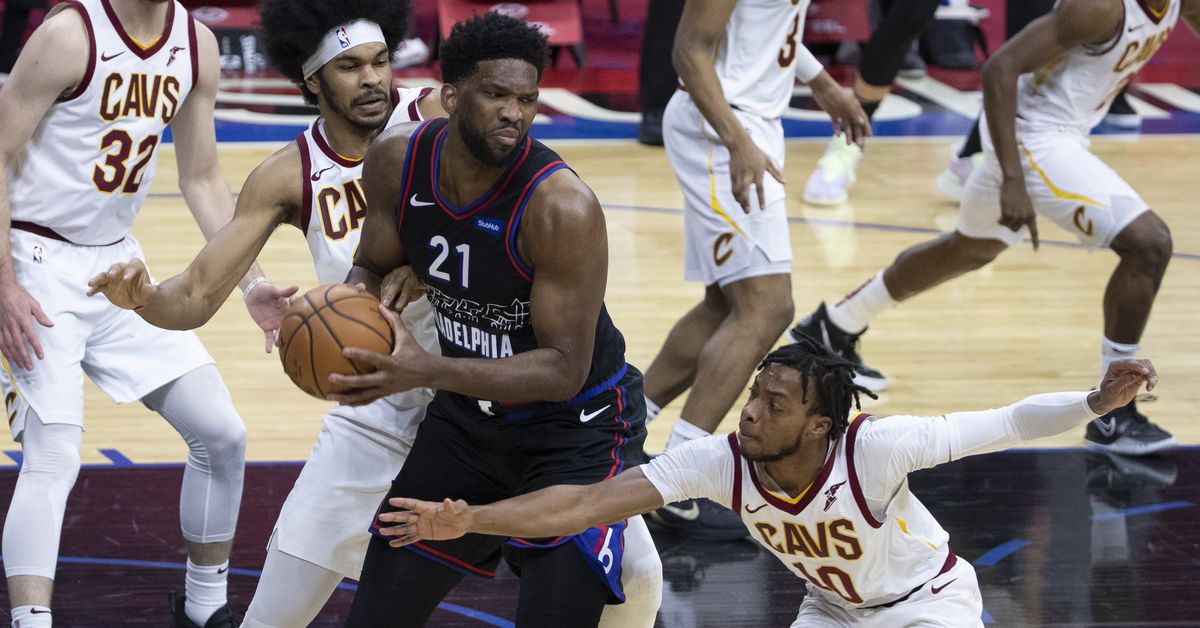 Ever since LeBron James left Cleveland for the second time of his career, the Sixers probably saw the Cavaliers as little more than a “trap game” over the last couple seasons. But every time the Cavs dip their toes in the lottery waters, they seem to come out on top.

A rebuild in 2003 landed them James. When he left for Miami, they went back to the well and landed Kyrie Irving, and the picks they needed to bring in Kevin Love. Of course, they could have just selected Joel Embiid in 2014 and perhaps James, Embiid, and Kyrie would be looking for their third or fourth ring by now. But they apparently didn’t think Embiid was worth the wait. Now they’ll have to stop him.

Still, they’ve once again set themselves up for long-term success with a core of Darius Garland, Evan Mobley, and Jarrett Allen. The future is pretty bright in Cleveland, Ohio. And if you’re looking ahead to the Super Bowl, it’s not too shabby in Cincinnati either.

Some real “Joe Burrow, ring that bell brother” energy in this locker room.

Both the Sixers and Cavs played on Friday night so it’s the battle of the back-to-backs. As such the injury report is pretty fluid.

The good news it that the Sixers got to sleep in their own beds and have home court.

Shake Milton finally returned to action after missing a month. Having lost Seth Curry, they could really use him to get back in the groove. How quickly you forget:

Since that was Milton’s first game back in a long time it wouldn’t be surprising if he didn’t play two nights in a row. Maybe we’ll get to see Paul Millsap, who just came over from the Brooklyn Nets in the Ben Simmons-James Harden blockbuster.

See also  ‘Less education can be worth more.’ While college grads have a net worth about 5x higher than high school grads, here’s what can matter even more than that college diploma

Cleveland comes in with the 18th-ranked offense, scoring 109.9 points per 100 possessions. They have the third-ranked defense, allowing a stingy 105.1 points per 100. Cleveland has a net rating of 4.7, outscoring opponents by that amount on average. That’s the fifth-highest net rating in the NBA.

Like younger versions of the Sixers, the Cavs do turn the ball over a lot. They rank 27th in the NBA with 14.9 TO per outing. So Philadelphia will look to put the pressure on and see if they can’t create some transition buckets. On the flip, the Sixers are second in the league turning the ball over just 12.6 times per contest. They’ve been very protective of their possessions.

Kevin Durant has been impressed with the Cavs’ lead ball-handler. KD was actually looking to trade for Darius Garland after the All-Star teams were set and he went to Team LeBron, who said he needed some Cleveland muscle to take care of him.

And Durant is not alone. Lots of Sixers fans had their eye on him in possible Ben Simmons trades going back to last summer. The 6’2’’ Vanderbilt product made his first All-Star team at just 22 years-old. He missed the last game with a back injury but Doc Rivers and co. should plan as if they’ll have to face him.

Matisse Thybulle vs. Garland will be an especially fun matchup today.

Like his diminutive teammate, former Nets big Jarrett Allen has been one of the NBA’s most pleasant surprises. He’s one of the more popular players to have earned the label of “All-Star snub.”

And if the NBA redraft were to happen today, Evan Mobley might have already made a good case for himself as the top pick in a redraft. So the Cavs have a formidable front-court in addition to an All-Star in their back court. This won’t be a walk in the park for Embiid and co.

Like the Memphis Grizzlies out west, these Cavs are really young but really good.

These are actually two of the slower teams in the NBA. J.B. Bickerstaff’s bunch play at the 23rd-fastest pace, and Doc Rivers’ Sixers, walk it up at the 26th-quickest pace.

Speaking of Garland, Tyrese Maxey, a native of Garland, Texas finished the last game with 24 points, five rebounds, and two assists. He’s been one of the most improved players this year, too. Maxey was questionable ahead of the previous game, a 100-87 win over the Thunder, with hamstring tightness. But he looked good so perhaps he’ll be able to go again.

Seth Curry and Andre Drummond are already settling in with their new team, the Brooklyn Nets. So the Sixers are not just playing on a back-to-back, they’re down a few key players following the blockbuster trade that brought in James Harden. That opened the door for Paul Reed to get some run in the last one. He missed a breakaway dunk trying to get fancy but he had a couple nice defensive possessions finishing with two blocks. We’ll look for him in the lineup again. Maybe newcomer Paul Millsap will make his debut.

There’s also this other guy. It’s possible you’ve heard of him. He’s not available to return but if he did play in any of the games pre-All-Star break it would mean a showdown vs. the Boston Celtics, Milwaukee Bucks or even both.

The Cavs are just 1.5 games ahead of the Sixers, so this contest actually has some possible playoff implications. Now that the Sixers landed James Harden, they’ve vaulted to the top of the NBA title odds leaders board.

And Embiid is happy to think about other things. Like fashion week.

Cleveland has won 13 of 16. The Sixers have won seven of 10. Something’s gotta give.

Who: Philadelphia 76ers vs. Cleveland Cavaliers