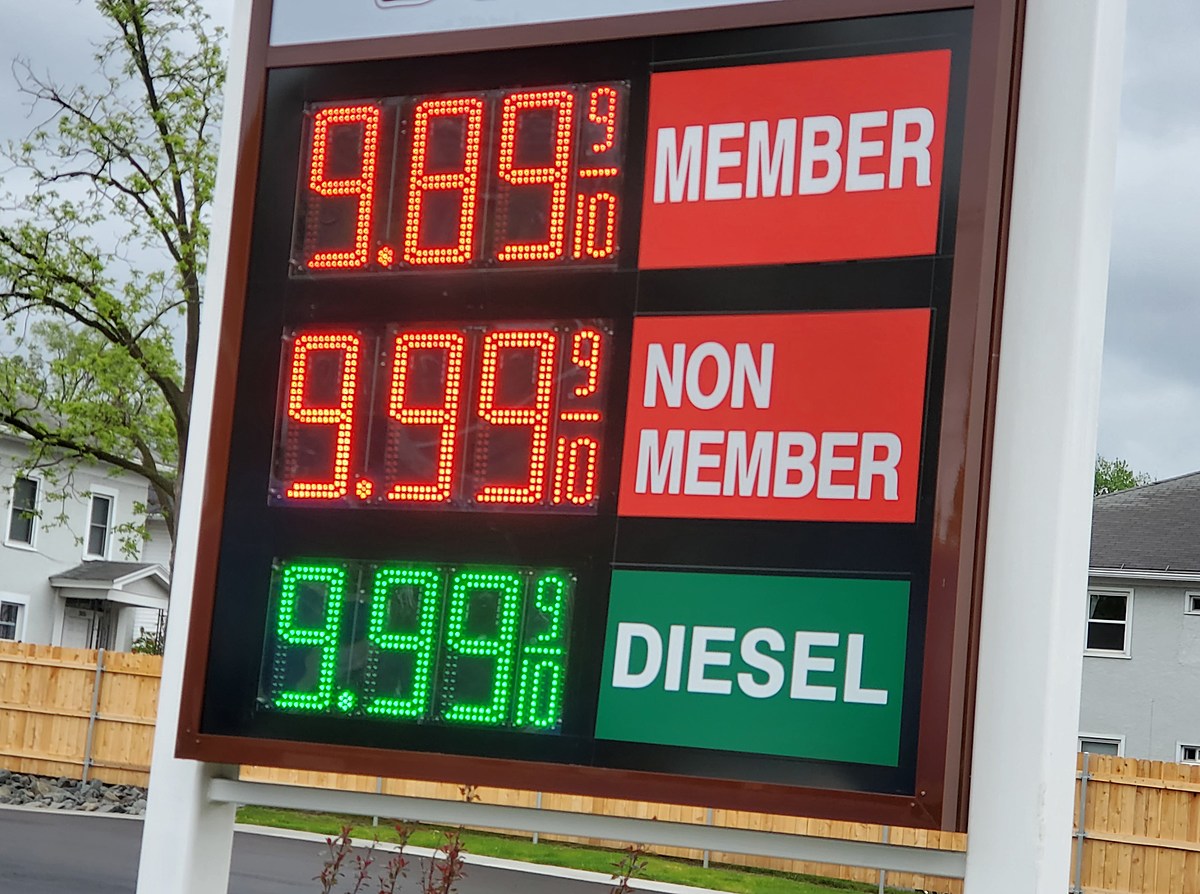 Everyone expected gasoline prices to continue rising with Memorial Day weekend approaching but the prices posted in Endicott caused some people to do a double take.

The sign at the soon-to-open Byrne Dairy & Deli on East Main Street on Thursday was displaying hard-to-believe prices of nearly 10 dollars a gallon for gas and diesel.

As it turned out, the prices are not what people will be paying when the convenience store launches operations next week.

Byrne Dairy vice president Christian Brunelle said the electronic display was turned on and tested to ensure property formatting of the prices.

Promotional signs posted along the street entice drivers with a “gas special” promising an opening price of $3.999 a gallon for regular. That price will be offered for customers who enroll in the Byrne membership program.

The signs indicate the discounted price will be available from May 25 through June 10.

Brunelle said the Endicott store is scheduled to open at 6 a.m. Wednesday. He said he expects the first day of business will be busy, not only because of the gas price promotion but because this is the first Byrne store in the Binghamton market.

The $3.999 sale price for “members” will represent a substantial discount as gasoline prices are still rising on an almost-daily basis. A nearby Endicott convenience store on Thursday had a posted credit card price of $4.959 for regular.

For your amusement: Watch my report where I conveniently neglected to mention the store opening price special! (I hadn’t spoken with the Byrne Dairy representative at that point.)

LOOK: See how much gasoline cost the year you started driving

To find out more about how has the price of gas changed throughout the years, Stacker ran the numbers on the cost of a gallon of gasoline for each of the last 84 years. Using data from the Bureau of Labor Statistics (released in April 2020), we analyzed the average price for a gallon of unleaded regular gasoline from 1976 to 2020 along with the Consumer Price Index (CPI) for unleaded regular gasoline from 1937 to 1976, including the absolute and inflation-adjusted prices for each year.

Read on to explore the cost of gas over time and rediscover just how much a gallon was when you first started driving.

See the Must-Drive Roads in Every State

LOOK: Here are the 50 best beach towns in America

Every beach town has its share of pluses and minuses, which got us thinking about what makes a beach town the best one to live in. To find out, Stacker consulted data from WalletHub, released June 17, 2020, that compares U.S. beach towns. Ratings are based on six categories: affordability, weather, safety, economy, education and health, and quality of life. The cities ranged in population from 10,000 to 150,000, but they had to have at least one local beach listed on TripAdvisor. Read the full methodology here. From those rankings, we selected the top 50. Readers who live in California and Florida will be unsurprised to learn that many of towns featured here are in one of those two states.

Keep reading to see if your favorite beach town made the cut.