In the new AppleTV+ series, the actor plays a unique villain. He tells IndieWire how he anchored the tricky role.

If you aren’t watching the terrifying performance actor Jamie Bell is giving on the Apple TV+ series, “Shining Girls,” you’re missing out. Bell plays Harper, the mysterious villain who has stalked (and attacked) Kirby (Elisabeth Moss), and several other women, for decades for unknown reasons. From Bell’s first introduction in the series there’s a sense of foreboding to him, a general unease that’s belied by his normal guy demeanor, not to mention the fact that Bell himself has tended to play good guys.

Bell spoke to IndieWire via Zoom this week and clarified that, in Lauren Beukes’ novel, the character of Harper was more of a charmer. “He’s described as handsome and has like slicked hair,” said Bell. But as enticing as that image is series creator Silka Luisa didn’t want to glamorize a character who spends his time attacking and harming women.

Bell said he wanted to retain that level of charm from the novel but didn’t want the character to be intimidating. “He’s diminished in his stature and, also, not particularly tall. I have these jug-like ears which I think put people at ease because there’s something sweet or boyish about them. So I really had that in my pocket,” said Bell.

Bell also discussed working alongside Moss and why the series seems to resonate with women considering recent events. This interview has been condensed and edited for clarity.

IndieWire: What initially jumped out at you about Harper?

Jamie Bell: On a superficial level, when you get a cover letter that has all of these names [who] are involved with the project to begin with it’s like cream, it just gets to the top. That’s everyone across the board: Elisabeth and [director] Michelle MacLaren. It’s wild the amount of people who have their hands in this. I was  intrigued. I love things that are based on previous things; I love original material, too but as an actor I go, “Oh, there’s something for me already to fall back on.” There’s some kind of safety net that I can use. It was mostly Michelle and Silka pitching me this character. they found it quite difficult to articulate who he was with just the few episodes they had completed at that stage. I think they only had maybe one or two. [Harper] is scattered throughout those episodes. We’re told up front he is the bad guy, but there isn’t much otherwise to go on. Who is he? What kind of a man is he? What’s he been through?

I start finding these little anchor points for me as the actor. What can I hang my hat on? As they started talking I got a few more ideas. When you’re playing a character like this the central question [is] why does a person do this? We, as a culture, have that obsession or that morbid curiosity about these kinds of, mostly, men. What is it that makes me go, “no, I would never do that” but for them it gives them license to do something like this. I have that same curiosity. I think I’ve been saturated, as we all have, by this true crime genre. So I thought it’d be interesting to exercise that interest, and try and find a way to understand it a little bit more broadly.

What did you want to draw on, or not, from the book or from real-life figures?

I need to be honest with you, it’s such an icky place to be in, to start thinking about why these people have done the things that these people have done. You start listening to certain things and you are kind of like, “Oh, this is such a distasteful place to be in.” With that in mind, I don’t want to be inspired by these kinds of people. He’s a hybrid of many different people, fictional and nonfictional, and I was aware of all those references, but I never looked at one real person or another. I always find the fictional ones are just so much more interesting as characters because when you really get down to it the real guys are just really normal, tediously dull in their real lives.

So, to craft something for television it felt like we wanted something a little bit more dynamic, a little bit more interesting. This guy is someone who was delusional. Like that genuinely has a sense of grandeur about him that’s kind of pathetic. He feels he’s owed something, there’s that chip on his shoulder. I probably invented way more than I should have.

You, as Harper, approach each character so differently. Was that something intentional you wanted to do?

He has a very specific relationship with women [and] he has a very specific relationship with men. This is a guy who enjoys, gets off on, fucking with people. His biggest thrill is looking in the eyes of someone who feels confused, and scared, and threatened. That’s his kick. That’s his drug. That’s like sex to him. This voyeuristic, predatory instinct where you have your prey on a hook, but you won’t let it go and you won’t kill it.

What I’m thinking of what is for me, it’s when my soccer team scores, I lose my fucking mind. I go absolutely insane. It’s the same thing for him, seeing these, predominantly, women struggle, or feel scared, or feel diminished, or powerless in his presence. It gives him life, it feeds him. So with each person he does do it differently. With Philippa Soo’s character [Jin-Sook], he’s been to this moment before many, many times. I think with Julia, he’s practiced it. He understands that she likes coffee, so now he has one for her. He’s learned their behaviors. He knows how to ingratiate himself. He doesn’t like to be corrected, especially by women, that really sets him off. There’s lots of little things that set him off: the lack of control, the loss of control, the feeling diminished, the feeling humiliated, which is all tied to his previous life. 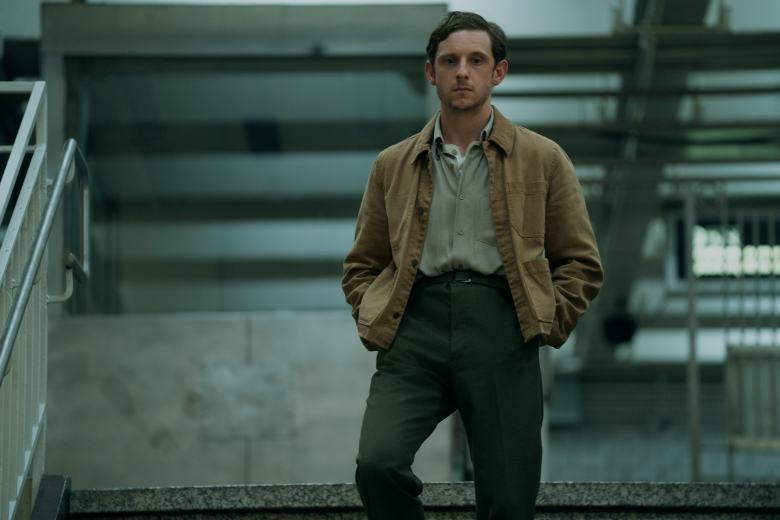 But in doing all of these things, and talking about them, and performing the scenes, it is uncomfortably intimate, in a way. Because when you read physical scenes like this in a script, you just go, “Oh, that’s a stunt.” That might not even be me doing it, to be honest with you. It might be somebody else. So you gloss over. You don’t really think about it. But when it comes to performing those scenes, because of the kind of character he is [and] because of the vulnerability of the other person within the scene, it’s such an awful thing to have to perform. I found it really challenging and uncomfortable to have to do [it], as well.

Considering the recent political climate with regards to women in the United States, has it been interesting to look back on this character and his relationship to women?

It’s so complicated because this is also another show where a lot of women die, and at the hands of men. One thing that it’s saying is violence towards women is timeless. It happens through decades, and decades, and centuries, and centuries. Our time travel element, this genre-bending element of it is really a metaphor for how trauma actually feels. It doesn’t just stay in the moment of or shortly thereafter. Once the wounds have healed the scars are invisible and your relationships change constantly to your employer, to your own children, to your parents. You’re constantly finding ways to fit in and change yourself so that those scars aren’t all you’re presenting.

What I like about the story, and hopefully people who have been through these horrific things, or have suffered assaults—stalking is horrific and can really harm a person mentally, for years and years after—this is a woman who has the chance and not many people have the chance to confront that trauma, and rid herself of it in a literal way. I hope that in some way, through Lizzie’s nuanced, complicated, performance is some element of catharsis, some kind of better understanding of their own trauma that they’re going through. That’s the horror of the show, it’s not m[y character]. I’m just the guy with a knife, which is still horrific, but true horror is waking up going, like, “I don’t know who I am today. I don’t know who I’m gonna be tomorrow.”

Surprises from my dad, the man who taught me how to...

Ruben Randall - March 28, 2022 0
TV/Movies
Whoever said “kids say the darndest things” has obviously not heard their father share personal information before. When moving me into my apartment this...