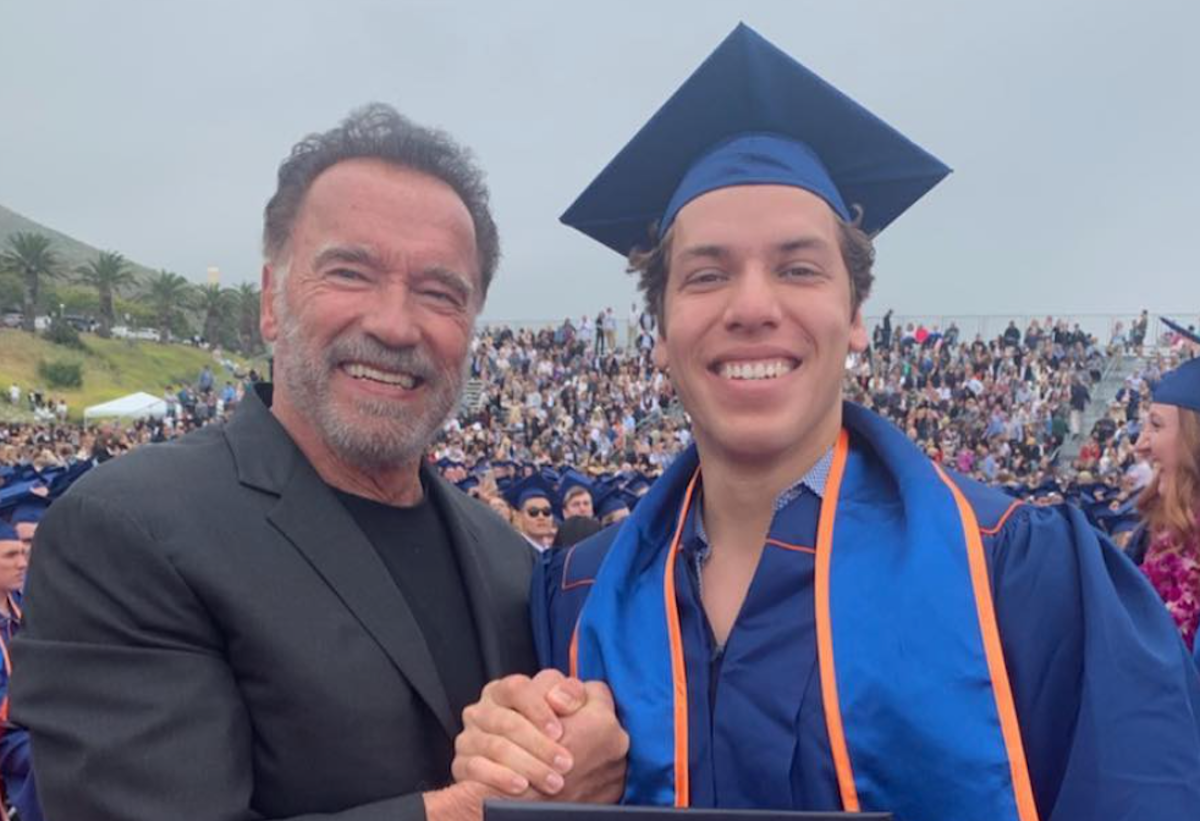 Paparazzi photos of the two spending time together on Apr. 5 came as a surprise since Patrick and Baena hadn’t been seen together before. According to E! News, the two were working out together at the Santa Monica Stairs, along with Baena’s girlfriend. It’s unclear, of course, how much the brothers had already bonded on their own before this particular meetup.

Read on to learn more Baena and his relationship with the Schwarzenegger family. And for more famous parents, check out See What Julia Roberts’ 3 Kids Look Like as Teenagers. 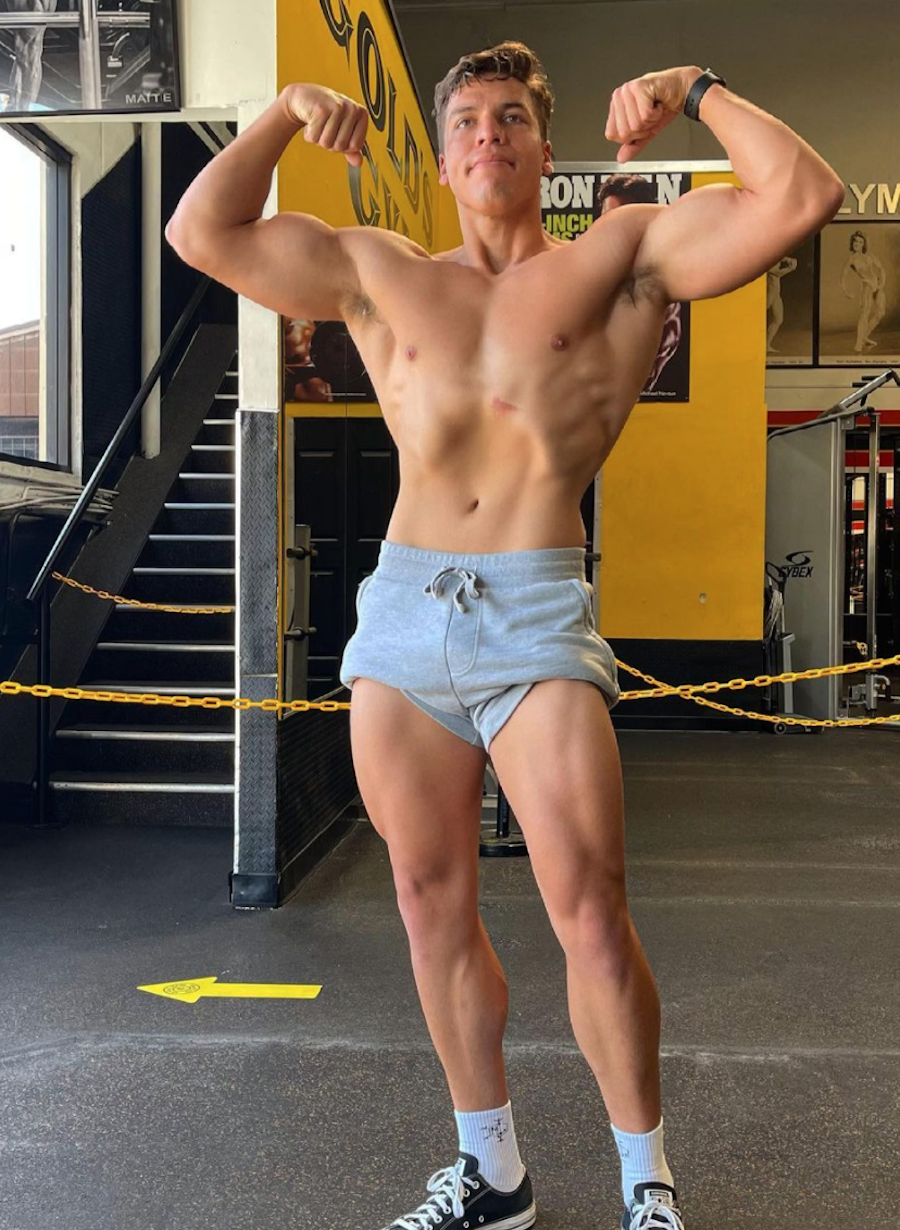 Before becoming an actor, Schwarzenegger was famous for being a bodybuilder and winning many competitions, including Mr. Universe. In an interview with the Daily Mail in February, Baena said that while he enjoys bodybuilding, he does not plan to do it competitively like his dad.

“The bodybuilding, the fitness, the training, it’s all just a personal preference of mine that I want to look how I want to look,” he said. “And I think that it’s gonna be helpful for the movies.”

Baena has quite the resemblance to his dad. For more celeb children like him, check out 25 Celebrity Kids Who Look Just Like Their Parents. 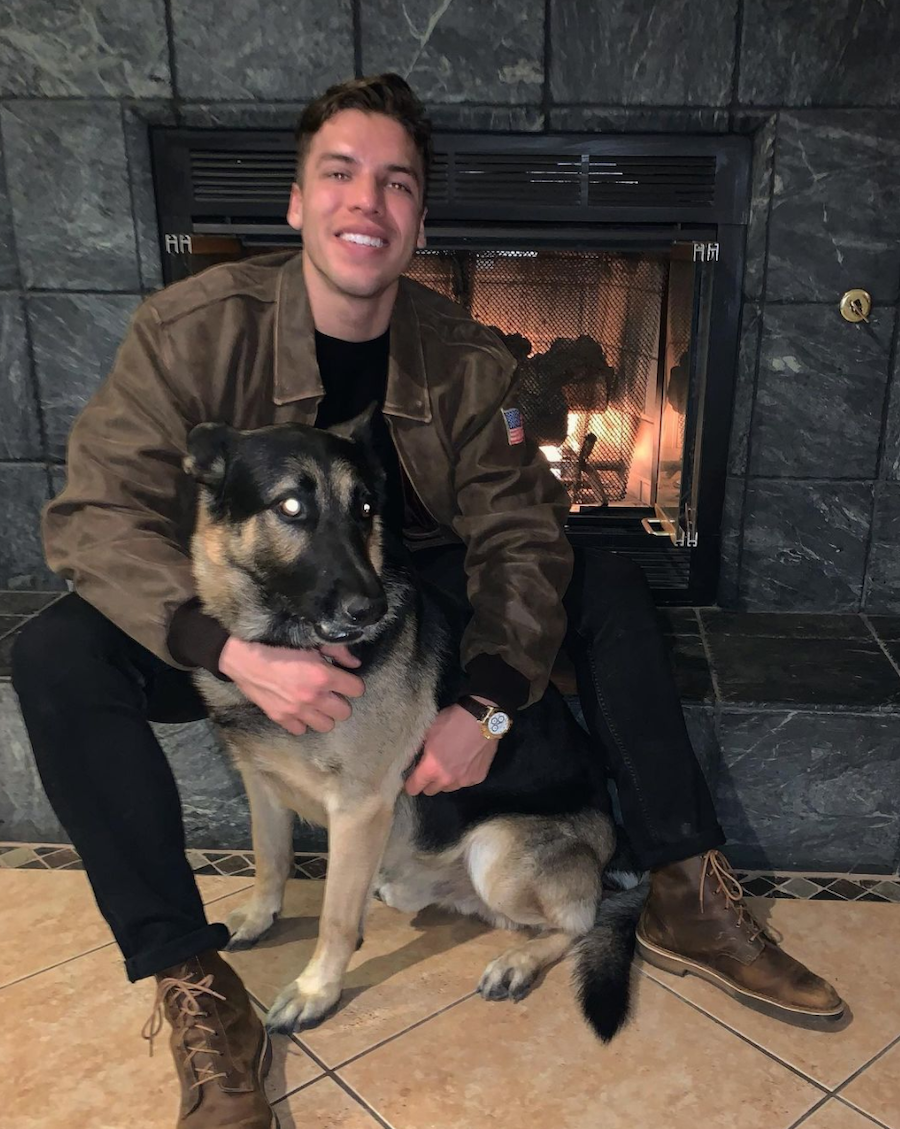 And that leads to the next point: Baena is embarking on an acting career. “Acting has always been something that I’ve loved,” he told the Daily Mail. “And since I’ve joined this acting class almost four years ago… I’ve just fallen in love with reading scripts, doing monologues, doing scenes. So the passion just keeps growing for it. And, you know, I don’t want to stop, I want to keep going.”

Baena has a role in the upcoming movie The Chariot, which stars John Malkovich and Rosa Salazar. The movie is a dark comedy about reincarnation. “I’m this fun character named Vince, a stallion, a stud if you will,” he said in the Daily Mail interview. “So I’m excited to play the classy husband.”

On his Instagram, Baena has also talked about having a role in a production called Scam Squad.

For another kid following in their parent’s acting footsteps, See James Gandolfini’s Lookalike Son as Tony in the Sopranos Prequel. 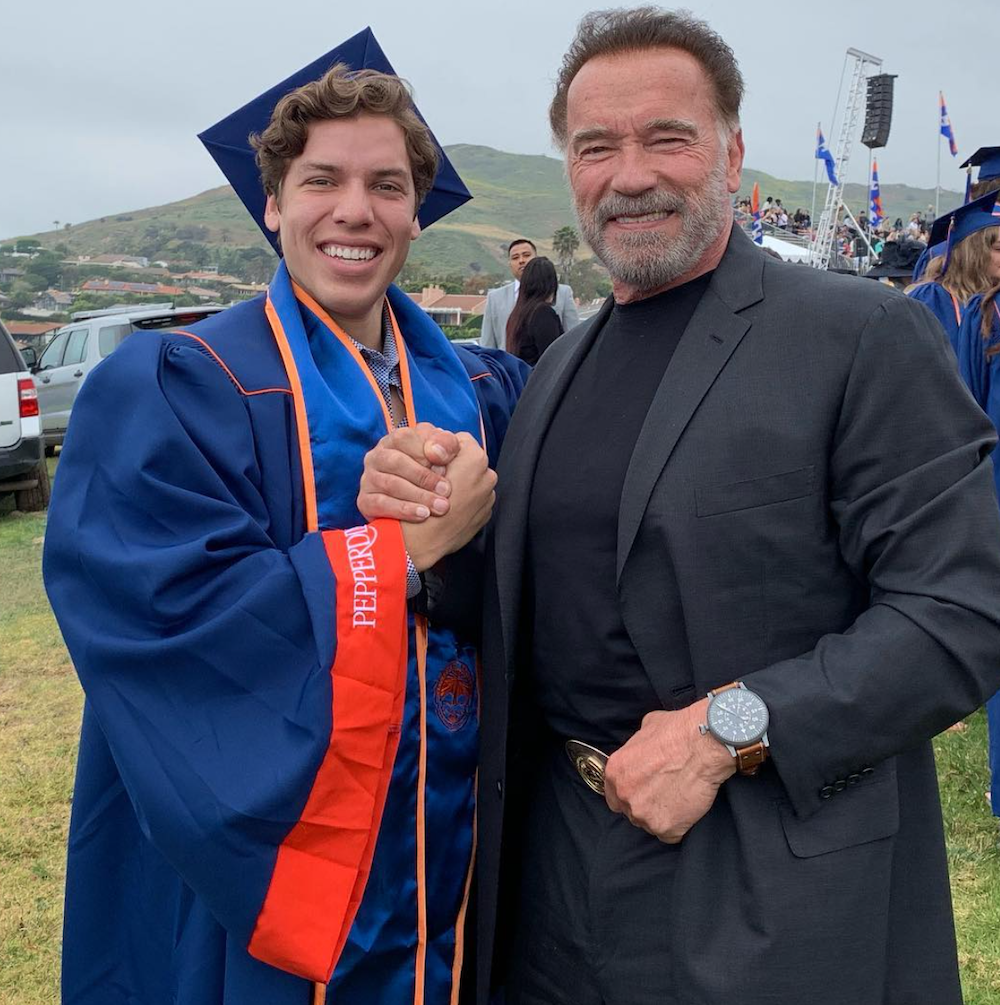 Baena attended Pepperdine University in California and graduated in 2019. Schwarzenegger posted a photo on Instagram of them together at his son’s graduation and wrote, “Congratulations Joseph! Four years of hard work studying business at Pepperdine and today is your big day! You have earned all of the celebration and I’m so proud of you. I love you!”

For more celebrity news delivered right to your inbox, sign up for our daily newsletter. 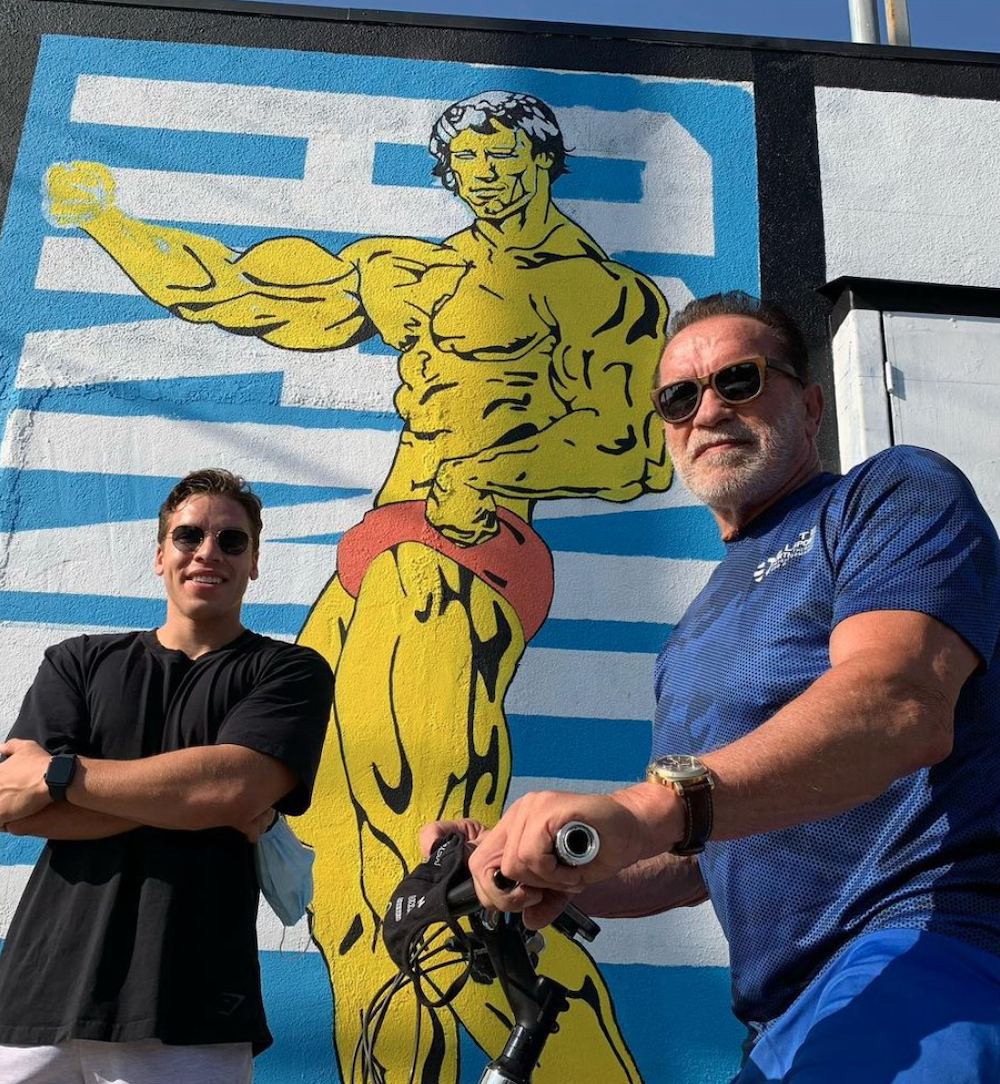 Even though they’ve been through a lot, Baena and his parents have solid relationships. Baena shares photos of both of them on social media.ae0fcc31ae342fd3a1346ebb1f342fcb

“I love my dad! We hang out all the time!” Baena said in a 2019 interview with HollywoodLife. “He is a great father! That’s really all I have to say about him! We train together, we eat together. We do many things together.” He added, “He is a jokester! He can be intense sometimes. He knows how to get things done. If he needs to get things done, he is going to get things done. He is serious about his work and what he does.”

For Mother’s Day in 2020, he wrote of his mom on Instagram, “I LOVE MY MAMA! Happy Mother’s Day to all the mothers out there. Thank you for always being our best friends, our protectors and our teachers! You all deserve the best on this special day and every day.”

At the time of the HollywoodLife interview, Baena said that he wouldn’t talk about his half-siblings, of which he has four: Patrick, Katherine, Christina, and Christopher Schwarzenegger. But from those paparazzi photos, it’s evident that he at least has a relationship with Patrick.

For another star who’s close with his kids, check out Pierce Brosnan’s Model Sons Will Totally Remind You of Their Dad.

Ruben Randall - November 7, 2022 0
Money
Katt Williams is a famous American actor and comedian who has a significant amount of net worth. Katt got his start in stand-up comedy...