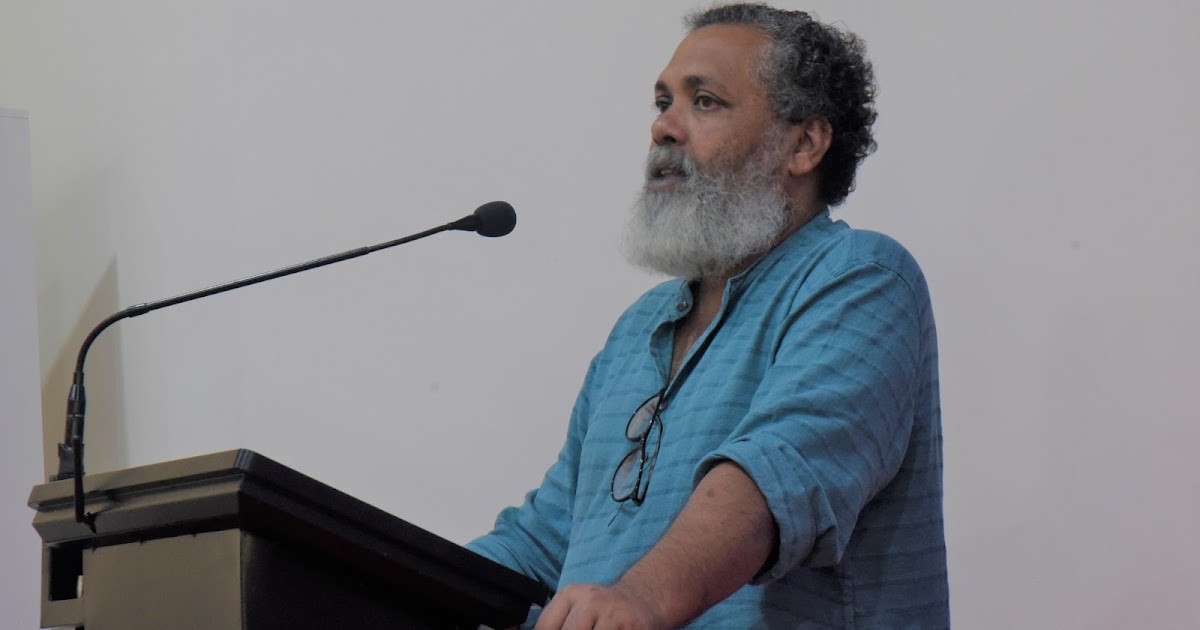 By Rosamma Thomas*
“So how many of you have swum in the Meenachil?” asked Dr TV Sajeev, scientist at the Kerala Forest Research Institute, of the over 100 undergraduate students who had gathered for a talk on climate change and nature conservation at St Thomas College, Pala, Kottayam district, on Wednesday. None of the students had wet their feet in the river, which flows right behind the college.

Dr Sajeev explained that after all these years, the memories that remained with him of his time as a student were the days he went swimming in the river nearby. “I don’t recall my examinations, how much I scored,” he said.
Asking students to question authority, he mentioned that the biggest and most revered figures through history were people who went against the tide – Socrates, Christ, Buddha. They were not people who conformed to society’s expectations. “If you conform, you will study, marry, produce children and die – that is the trajectory of life that society and your parents wish for you.”
How, you might ask, do these observations fit into a talk on climate change? Dr Sajeev is a speaker with a vast canvas, and in painting the big picture for students, he draws on a range of subjects. Two talks he gave at the college were titled: “Climate has changed; so what?” and, “The black spot on fish eggs and other stories of our rivers”.
Dr Sajeev opened by telling students that when he went to school, it was expected that the first day of school, June 1, would bring the monsoon over Kerala – so each year, the first day after the summer break would mean arriving drenched at school. That rhythm no longer exists in nature, and we cannot quite foretell as precisely the patterns of the monsoon rains.

Even though scientists warned about 10 years ago that Kerala would be hit by heavier rains than previously experienced, in the dry spells of 2016 and 2017, the state government took to digging the earth to hold rainwater in anticipation of a prolonged spell of lack of rain. Those trenches for rainwater harvesting proved disastrous during the heavy rain of 2018, when sand was more easily washed away for having been first disturbed.
The scientist went on to show that governance mechanisms often work without a basis in science, making a bad situation even worse. He mentioned sacred groves, sarpa kaavu, that earlier dotted the state. These were thickly forested patches of space, left undisturbed to protect moulting snakes.

There was veneration for nature, and recognition that the time the snake shed its skin was a time of stress – so the snakes needed to be able to find a space that was undisturbed. Society’s belief system offered protection.

However, as land became scarce, there was provision made for a special puja, after which that land could be converted and taken over. Faith, the scientist said, can be fickle. It does not serve as a reliable or rational basis for nature conservation – that is why science is all the more important.
Charting the heating of the earth, Dr Sajeev spoke of the 18th century invention by Thomas Newcomen of the atmospheric steam engine, which was used to power the pump that drew out water from coal mines. That was the first time that energy that was neither human nor animal energy was used – these days, we have petrol, diesel, natural gas. Life without these fossil fuels is now inconceivable.
The average temperature of the earth, at 14-15 degrees Celsius (students were asked to guess how much the average temperate was and they came up with answers grossly off the mark) – has now risen since the first industrial revolution by 1.2 degrees C.
Why is life unique to planet Earth? Water, in its liquid form, is available only on this planet, thanks to its distance from the Sun – any closer, and water may have evaporated; any further, it would have been ice. This is what sustains all life on earth. There are greenhouse gases that blanket the Earth – carbon dioxide and methane, for instance, which trap the heat from the Sun.

Governance mechanisms often work without a basis in science, making a bad situation even worse

The thicker this layer becomes, the more heated the planet will become. If the ice in the north and south poles melt – as is happening – sea levels will rise, and islands like the Maldives, which are just about four metres above sea, will be lost. People are now migrating from such islands elsewhere.
Asking students if they knew how the Maldives was formed, the scientist explained that when the supercontinent Pangea began to break apart, what is today the Indian subcontinent broke off from Africa and shifted, moving over formations that were left by volcanic action.

As plates collided, the Himalaya rose as a mountain formation. The Western and Eastern Ghats emerged from the sea, the remnants of volcanic action pushed up by the collision of plates. This explains also the unique quality of soil in the Deccan Plateau.
Kerala is a land rich in a variety of forests – from moist deciduous to rainforest and shola forests, patches that occur in valleys where there is less fog and mist, and the trees are not very tall. There are grassland forests, where the neelakurinji blooms once in 12 years. Despite all this great diversity, though, young people from the state make a beeline for foreign shores. Why is that, the scientist asked.
“Joblessness,” came one response, louder and bolder than usual.
“Yes, joblessness, but not only that,” Dr Sajeev explained. “If you are born in Kerala, you have lost your freedom at birth. You are bound by caste, and one way to experience freedom is to leave. To grow to one’s full potential, to experience the true dignity of being human, it might be imperative to start afresh,” he said.
As one student asked about what could be done to conserve nature, Dr Sajeev answered that the annual tree planting drives and the ritual clearing of plastic were not the solution. We each have a carbon footprint, and living mindfully, not conforming to societal pressure to buy larger and more snazzier vehicles, were all part of the solution.

As a society, we need to calculate not just the economic costs of what we undertake, but also the ecological costs – if you tile up your front porch, you are leaving no space for water to seep into the earth. And that might cause the local well to run dry.
Construction is occurring at a frantic pace in the state, he said, and indicated that over 10 lakh houses, by one estimate, were uninhabited in the state; even so, new buildings are constantly being constructed. And one important material for construction is sand – when a fish lays eggs, they roll on sand.

It’s the rolling that keeps the fish egg alive, since all sides can breathe. When the sand is removed and the eggs fall into dirt, they cannot roll anymore. And the fish egg will show you a dark spot – that black spot indicates that the egg has died.

—
Freelance journalist. The talk was sponsored by the MS Swaminathan Research Foundation and facilitated by the author

Ruben Randall - July 31, 2022 0
Actor
A MUM feared she would never get the chance to speak to her husband again after an asthma attack left him...