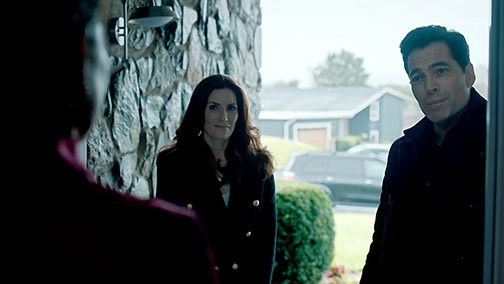 It’s been said to be a “seller’s market” for real estate lately. But even under such favorable conditions, the owners of the places featured in Syfy’s fun and frightening new scripted series SurrealEstate, premiering Friday, would find it impossible to unload their properties. A leaky roof or a crack in a foundation may not be deal breakers for motivated home buyers; poltergeists, demon dogs and portals to hell in a cellar, on the other hand, certainly are.

That’s where Realtor Luke Roman (Tim Rozon) and his elite team of specialists, including new agent Susan Ireland (Sarah Levy), who joins the Roman Agency in the first episode, come in. They specialize in handling haunted and possessed houses (Luke, using classic real estate agent jargon, refers to them as “stigmatized properties”) that literally scare would-be buyers away. Investigating and “fixing” the things that go bump in the night, the team works to create closure — and closings — even as they struggle with demons of their own.

It’s a great premise, executed quite entertainingly thanks to the style and tone, a combination of tongue-in-cheek humor and horror, delivered by creator/showrunner/head writer George Olson — himself a former Realtor — and the engaging lead performances of former Schitt’s Creek costars Rozon and Levy. The actors were thrilled when they learned they would be working together again, and their chemistry and ease with each other is a strong part of why the show’s unique vibe works so well.

“What I got, literally [from] reading the first script, was that there’s a certain tone to the show that I’ve never been a part of before” says Rozon, who also starred in previous Friday night Syfy series like Vagrant Queen and the recently ended fan-favorite Wynonna Earp. “[That] was really exciting, and I could feel it from Day One of shooting.”

Levy agrees, saying, “Just reading it was something different than anything that I have ever done before. I pretty much have done comedy before this, so this was a huge departure.

“Then seeing the style of it was so interesting and unique. I know they were trying to pull from a lot of older movies, and Hitchcock and The Exorcist, and all of that. As tongue-in-cheek as the show can be, and it does have humor infused into a lot of it, it also does have that eerie, spooky feel of a really good horror movie.”

That is evident right away in the first episode, when Luke pays a visit to an old estate whose owner is being terrorized by demonic experiences, and in a secondary story, featuring a family dealing with poltergeist-like activity in their home. And it isn’t just the events in these “stigmatized properties” that add to the creepy ambience of the series, but also the physical spaces of the homes themselves.

“All the locations were actual houses,” Rozon explains, “which, again, adds to the tone of the show. And what made me love it so much is that each episode is a new house. So, it’s a new ‘something special’ that we need to deal with [each week].”

These houses were in St. John’s, Newfoundland, where the series filmed, and both stars found the city as a whole gave off a certain feel conducive to the theme of the show.

“What we had been told when we were there,” Levy recalls, “was that St. John’s is a pretty haunted city. Most people that I talked to, even if they weren’t ‘believers,’ everyone had at least one story when they were alone in a house [and] they felt something on their leg, or they heard something, or they saw something. I mean everyone.

“The city had a pretty major fire in the early 1900s, and it decimated most of the city. They think that’s where the hauntings came from. So St. John’s as a whole is actually somewhat of a pretty spooky place. A lot of the old houses that we shot in were very ‘vibe-y,’ for lack of a better word. You could just feel that there was energy in the air that you don’t normally feel walking into most houses.”

“There’s a vibe there,” Rozon agrees. “There’s something going on, and a lot of people experienced a lot of things. Now, I’m not saying I did experience anything, because I didn’t. But I definitely didn’t think the people who told me they did were lying.

“I didn’t believe in ghosts before this show … now I’m not so sure.”

Ruben Randall - December 26, 2021 0
Celebrity
On Thursday, December 23, YouTuber and Dancing with the Stars participant Olivia Jade appeared on E!'s Down In The DMs. In a segment...