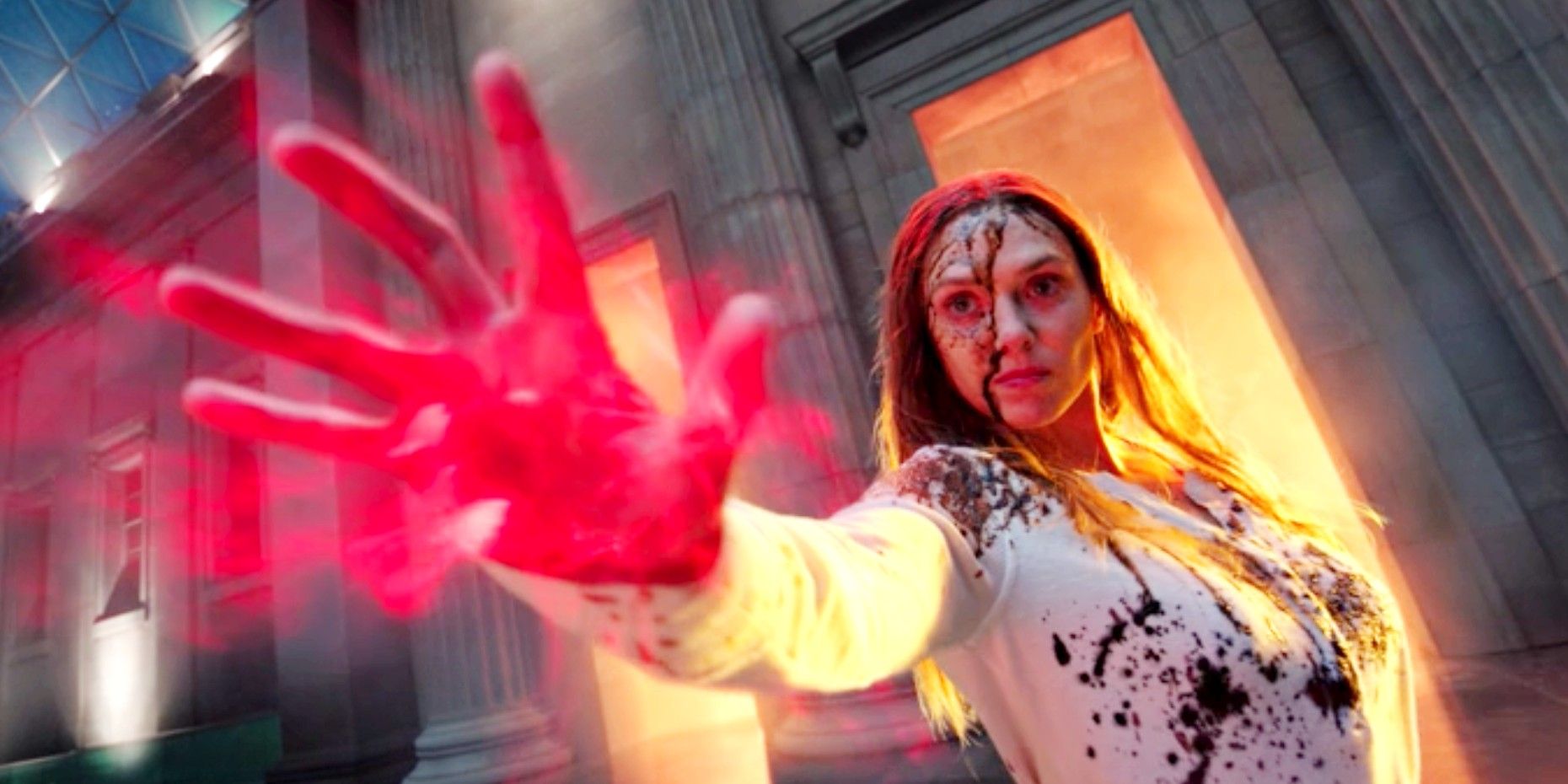 A new Doctor Strange in the Multiverse of Madness behind-the-scenes set video makes Scarlet Witch’s fight with the Illuminati a lot less terrifying.

A new Doctor Strange in the Multiverse of Madness behind-the-scenes set video makes Scarlet Witch’s battle with the Illuminati much less terrifying. Billed as the Marvel Cinematic Universe’s first horror movie, Multiverse of Madness was helmed by genre icon Sam Raimi. The significantly darker MCU entry followed on from WandaVision, turning Wanda Maximoff/Scarlet Witch (Elizabeth Olsen) into the villain as she hunted America Chavez (Xochitl Gomez) and Strange (Benedict Cumberbatch) through the multiverse in order to be reunited with her lost children. While Scarlet Witch eventually somewhat redeemed herself by the end of Multiverse of Madness by destroying the Dark Hold temple — and seemingly herself — the character still delivered some devastating blows throughout the sequel.

Scarlet Witch first proved her antagonist status through her brutal attack on Kamar-Taj, ruthlessly destroying the sorcerers’ home and many within it. However, her most vicious actions came during her battle with the Illuminati after dream-walking into Earth-838’s Wanda. Following Strange and America to the alternate universe, Scarlet Witch decimated the surprise cameo line-up of John Krasinski’s Reed Richards/Mister Fantastic, Lashana Lynch’s Captain Marvel, Anson Mount’s Black Bolt, and Hayley Atwell’s Captain Carter, in creative yet horrifying ways. In particular, Scarlet Witch’s murder of Patrick Stewart’s Professor X directly referenced Raimi’s previous 2009 horror film Drag Me to Hell, as her zombie iteration broke the mutant’s neck.

Related: What Did Wanda Say To Scarlet Witch In Doctor Strange 2 (& What It Means)

Now, a new set video shared by Scarlet Witch News makes these scenes much less scary. The clip shows a behind-the-scenes look at how Scarlet Witch’s Illuminati battle came together, among other Multiverse of Madness scenes. It reveals an extremely stripped-back green screen set as Olsen is suspended on wires while wearing various harnesses. In particular, Wanda’s fight against Captain Marvel and Reed Richards are shown in their true form, as the actors perform surrounded in close quarters by various lights and cameras, balancing on large rigs. Check it out below:

Of course, it’s no surprise that a blockbuster film like Multiverse of Madness involves significant amounts of green screen work and special effects, which is standard practice in superhero films. However, this new clip provides a rare glimpse into what Raimi’s fast-paced, horror-fuelled fight sequences look like during filming. The stark contrast between the few elements physically present on set and Doctor Strange 2’s final cut highlights the incredibly in-depth VFX, camera and stunt work that goes into creating a frightening and action-packed scene like Scarlet Witch’s Illuminati battle. What’s more, Raimi’s iconic horror elements are almost entirely removed in this very basic look at the film’s biggest fight scene.

Not only does this behind-the-scenes set video underscore the impressive work of the MCU sequel’s production team, but also the work of its talented cast. With an extremely paired-back set environment, Olsen in particular was able to deliver a nuanced, emotional performance supported by convincing stunt work. After having played Wanda Maximoff in the MCU for nearly a decade, Olsen is no stranger to the character, but Doctor Strange in the Multiverse of Madness pushed Scarlet Witch to new depths and allowed her to take up the mantle of horror movie villain. This video is just another glimpse into how her critically-praised performance came to be.


Tess is a Senior News Editor for Screen Rant’s Movie and TV News sections and joined the site in 2021. Originally from Sydney, Australia with a background in journalism and television production, she is now based in London. Tess graduated from the University of Sydney with a degree in Journalism and a double major in Film and US Politics, inspiring her to pursue an editorial career in all things movies, TV and pop culture. Her claim to fame is that she once met Matt Damon on an escalator. You can get in touch with Tess directly by emailing [email protected], or on Twitter @tessdcgreen.

China’s Covid spike not due to lifting of curbs

Almost Home Dog Rescue is look for homes for Bert and...