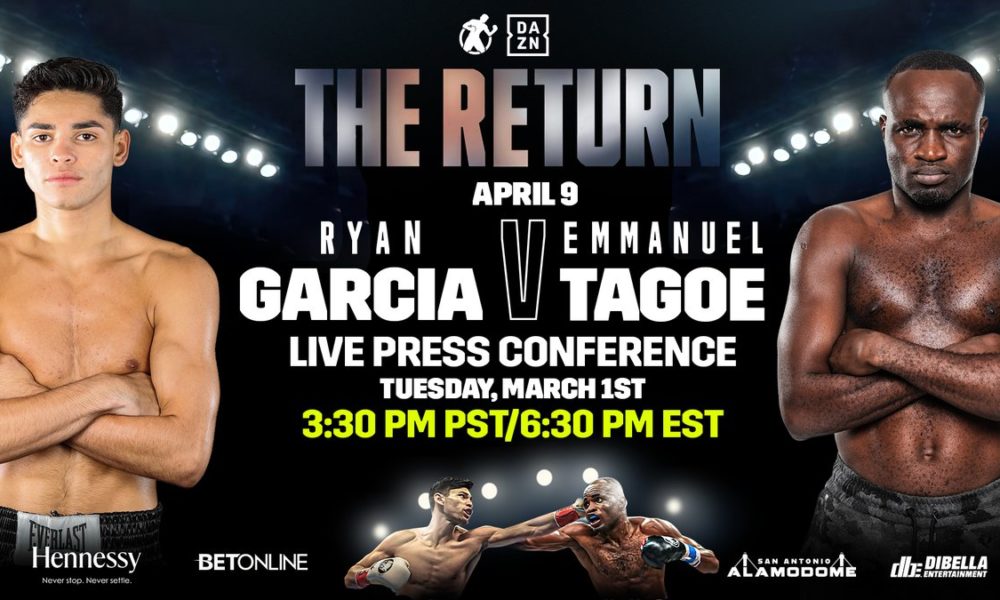 On Tuesday afternoon, unbeaten Lightweight contender Ryan Garcia took part in the kickoff press conference for his long awaited return to the ring on April 9th. And, “King Ryan” made clear that he knows opponent, veteran Emmanuel Tagoe of Ghana will bring it.

Garcia told the media that he expects Tagoe will come after him in what will be the biggest stage of his career, to date,

“I’m not looking passed Tagoe. Rather or not people think he’s a good contender or not. I respect him and I think it’s going to be a good fight.” @ryangarcia #GarciaTagoe April 9 @daznboxing pic.twitter.com/DBxounkUJf

“I have nothing but respect for him. He has a big opportunity himself here. He’s been looking for one of the fights that could make or break him. And, I’m looking for a dog fight, if it so happens to be one,” Garcia said.

“Definitely not looking past him. Whether or not people think he’s a good contender or not, I respect him. And, it’s gonna be a good fight.”

Garcia was last in the ring on January 2, 2021, when he got his most credible win of his 21-0 pro career with a TKO over England’s Luke Campbell in Dallas. The Californian had been slated to potentially fight Haney after that, but instead was trying to make a bout with either Gervonta Davis or potentially, Manny Pacquiao at the beginning of the year. However, those two huge names both passed on the possibility of fighting him.

He hasn’t been in the ring in 14 months and has canceled out of two previous headlining fights last July and this past November.

The 23 year old Garcia announced in October that he suffered a hand injury while training to fight fellow Lightweight contender Joseph ‘Jo Jo’ Diaz. That was a WBC contender showdown that would’ve set the winner up to face champion Devin Haney. Instead, Diaz proceeded directly to the title shot, losing a one-sided 12 round decision in their December bout.

Garcia has also split with trainer Eddy Reynoso and by extension, Canelo Alvarez and now, has famed championship trainer/Fox Sports analyst Joe Goosen working with him.

As for Tagoe, he’s is 32-1 with 15 KOs. And, he’s also been inactive for longer than Garcia with his last bout coming in November 2020 in South Florida. That’s when he decisioned Mason Menard over 10 rounds.

Tagoe lost his first pro fight in June of 2004, but has now won 32 straight since. Tagoe has only fought outside of Africa on two previous occasions.

So, the veteran should pose a threat, as Garcia looks to get himself back in the title conversation.

How Did Fred Weasley Die in ‘Harry Potter?’