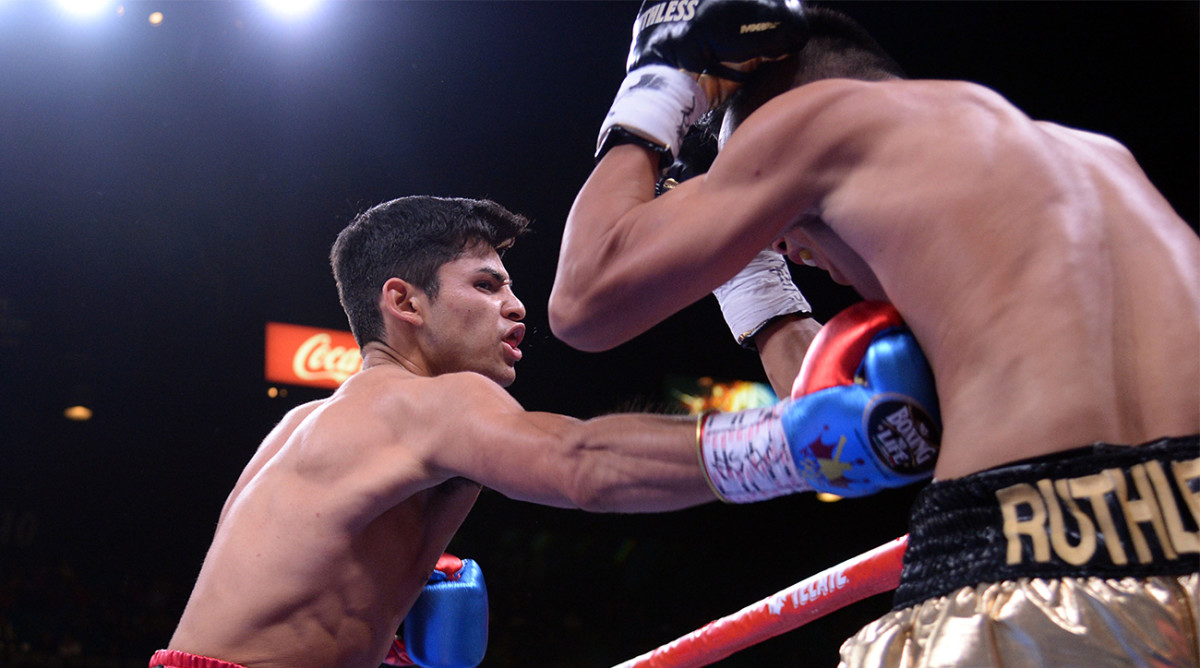 SAN DIEGO — Ryan Garcia hears the skeptics. How could he leave Eddy Reynoso? It was Reynoso, the reigning Trainer of the Year, who guided Garcia to five straight knockout wins after taking over his corner in 2018. In February, Garcia split with Reynoso, linking up with veteran trainer Joe Goossen. And what about Canelo Álvarez? It was a little more than a year ago that Álvarez, boxing’s pound-for-pound king, was in the ring celebrating Garcia’s win over Luke Campbell. Nowadays Álvarez is delivering biting criticisms of Garcia—when he’s talking about him at all.

“I’ve had to deal with a lot of drama in my short career,” Garcia says. “But I think everything works out for the better.”

It’s early March and Garcia is sitting on a ring apron in a nondescript, one-room gym in San Diego. An ice bag is wrapped around his left elbow. “Don’t read anything into that,” Goossen says. “He’s like a pitcher. You have to take care of that arm with the way he uses it.” On April 9, Garcia will end a 15-month layoff when he takes on Emmanuel Tagoe at the Alamodome in San Antonio. It will be Garcia’s first fight since his win over Campbell. That win answered many questions about Garcia. Yet as he prepares to return, he faces many more.

Where is he mentally? Last April, just months removed from beating Campbell, Garcia withdrew from a planned fight against Javier Fortuna, citing mental health issues. Garcia, a father of two with an Instagram following approaching nine million, says things happening outside the ring sent him “spiraling.”

“It finally caught up to me,” Garcia told Sports Illustrated. “And it just came crashing down.”

“Well anybody who knows about anxiety and depression knows that there’s signs there, but you don’t really pay any attention to them,” Garcia says. “So it kind of felt like one big explosion. I can’t really explain it fully detailed, but just know it was very hard and I was tormented in my own mind for a while and I couldn’t get out of it myself. So I asked for help.”

Álvarez was once Garcia’s mentor. The two shared a fraternal relationship. If Álvarez represented boxing’s present, Garcia was its future. Last year, Álvarez publicly questioned Garcia’s commitment. And in recent interviews he has doubled down, stating Garcia was “wasting his talent” and “needs to be disciplined.”

“I was like shocked,” Garcia says. “I didn’t quite understand why he would say something like that, especially to the media because he could have definitely taken me somewhere else and told me personally. So I was kind of confused on that. I kind of took it as disloyal because I would never do that to him. I would never speak on him in the gym on what I think he should be doing, or whatnot. We’re a team, we shouldn’t even speak any ill towards each other. I know I’ve never done that and I never will.

“He’s a great fighter, a great human being and I hope the best for him. But when he said that I felt betrayed like, ‘Really?’ like, O.K. And to be honest, I don’t think he really … he didn’t really want to show me the love I did. I don’t think so. Just based on other things. But it’s all good, man. I have a good heart, good intentions and I never wish bad on him. I think I’m in a good place, I’m happy. That ain’t going to change how I throw my punches so I don’t care.”

Garcia says he has a handle on his mental health issues. But it has been a struggle. Last spring, Garcia dropped into the gym for a workout. After a few minutes, he says, he just “broke down.” He got into a car with his manager, Lupe Valencia, and began to cry. I don’t know what’s wrong with me, Garcia said. I can’t move. I can’t do anything. It was then, Garcia says, he knew he needed help. “Speaking up, asking for help, getting real professional help—it started there,” Garcia says. “And then just enduring, persevering, trying to get better. There’s no really other way around it. I had to choose to just push myself, get myself back up because I was in a dark place. But everything kind of helped me. It was a big, big help for my family and friends and everything around me. Everybody contributed to getting me back on track.”

Including Goossen. Goossen has long been an admirer of Garcia. He worked with him as an amateur and in years past lamented not getting a chance to train him as a pro. When Garcia was evaluating new trainers, his time with Goossen resonated.

Goossen isn’t trying to reinvent Garcia. For now, he’s still learning about him. He likens Garcia to a new house you need to get to know before you make any changes. He says he would like to see Garcia get better at fighting on the inside. He cites Michael Nunn, an ex-Olympian who came to Goossen after the 1984 Games. Nunn struggled with that early in his career. In ’88, with Goossen in his corner, Nunn won a middleweight title.

Garcia says there won’t be any radical changes. He’s fully recovered from the hand injury that forced him to pull out of a fight against Joseph Diaz in November. “You’re definitely going to see me tighter,” Garcia says. “I won’t make as many technical errors.” For Garcia, Goossen has been another resource for him to tap into. “I don’t care if it’s Eddy Reynoso, if it’s Freddie Roach, I don’t care if it’s the most legendary trainer of the world,” Garcia says. “If I’ve got a question about something, you’re going to hear it from me. Because I’m trying to get better. If I say that positioning, why would I do that, you’re going to have to answer me because I’m not going to throw something that doesn’t make sense to me. I don’t just jump into dark waters and just hope I’d f—— swim.”

More than anything, Garcia just wants to be back. Much has changed in the 135-pound division in Garcia’s absence. George Kambosos, an unknown this time last year, is a four-belt champion after beating Teófimo López. Vasyl Lomachenko has rebounded. Gervonta Davis picked up two wins in 2021. Devin Haney, Garcia’s longtime rival, did, too. Garcia remains one of the most popular fighters in the world. But he’s anxious to prove he belongs on a list of its best.

“I’m above titles,” Garcia says. “I’m above the bulls—. So I don’t care if I could win a stupid title that doesn’t mean anything. I care about beating some good fighters. That’s what I want. That’s what I’m going to do.”

Emma Watson Once Said Hanging out With Daniel Radcliffe and Rupert...