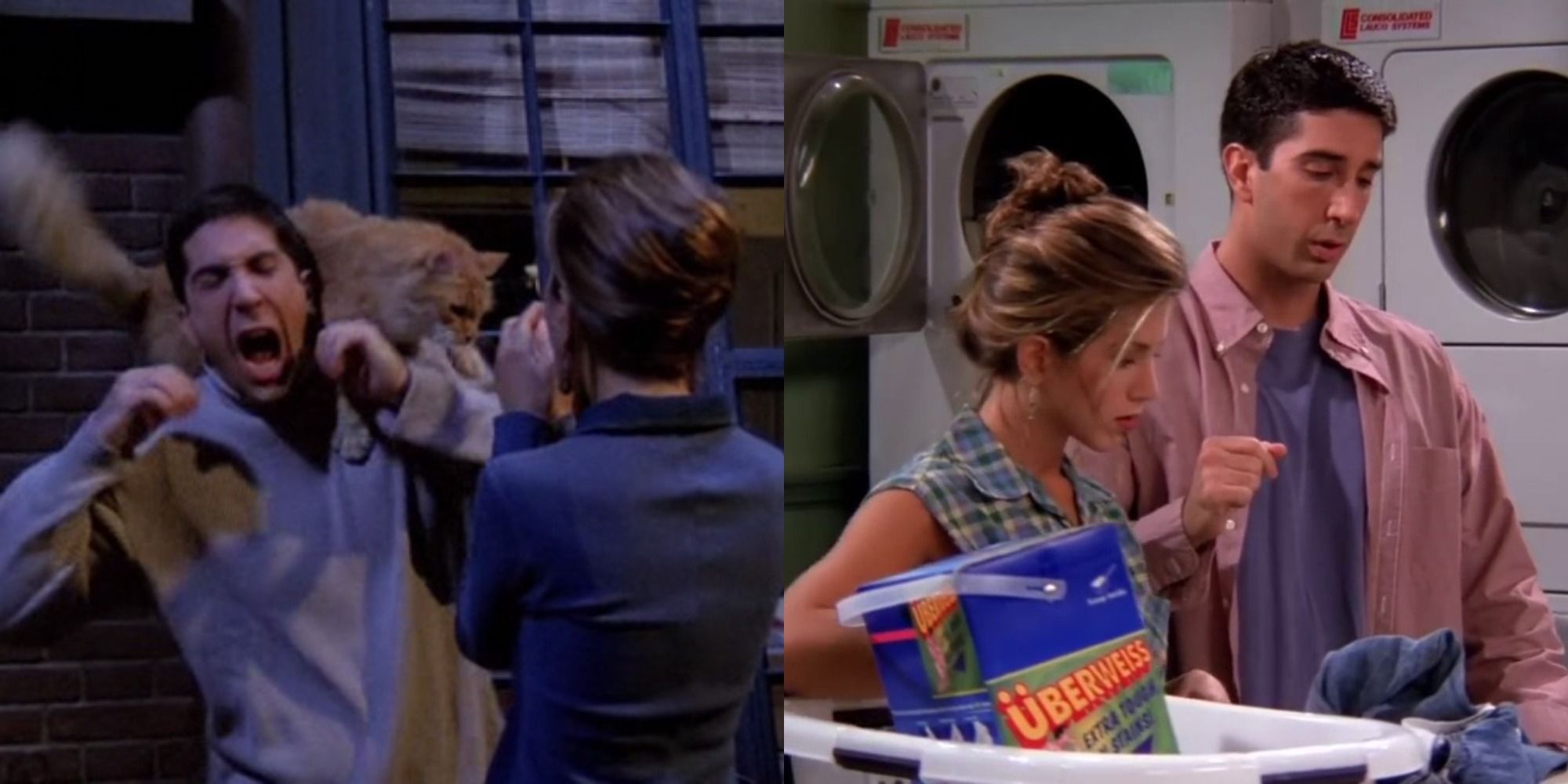 Fans of the popular sitcom Friends know that each of the characters has some of the most memorable scenes in TV history. Whether it’s eating cheesecake off the floor, dancing with a raw turkey on their heads, or professing their love for each other, each character has moments through the seasons that define them and help them to grow.

RELATED: 8 Unpopular Opinions About Ross From Friends (According To Reddit)

Throughout the show, Ross has moments that are crucial in building his character. Most of his growth started in the first season, though, when he comes to terms with his divorce, develops feelings for Rachel, and becomes a dad. Each of these moments is important to Ross and helped create many memorable moments that fans adore.

10 When He Helps Rachel With Her Laundry – Season 1, Episode 5

Ross teaching Rachel how to do her laundry shows how much he cared for her. In the season one episode, he goes with Rachel to do laundry because he wants to have some quality time with her.

However, when he realizes she is clueless about how to do laundry, he helps her without making her feel ridiculous and also shows her how to stand up for herself against the laundromat bully. He is a big part of Rachel learning how to become independent, which helps her to find her confidence again.

One Ross moment that shocked fans was when he kissed Chandler’s mom. Mrs. Bing comes to town so she can do an interview and the group takes her out to eat. While at dinner, Rachel shows up with Paolo, and Ross drinks so he can cope with his feelings.

Ross and Mrs. Bing have a talk about how Ross feels about Rachel and how difficult it is for him, which then leads to a kiss between them. Afterward, Ross spends time apologizing to Joey and Chandler for his actions. This moment is one of the best for Ross because it shows how much he cares for his friends and his vulnerable state around his feelings for Rachel.

Ross being hesitant to go to China is something fans can relate to. After he becomes a dad and begins to finally come out of his shell after his divorce, he is asked to go to China by his work. Ross leaves his birthday gift for Rachel behind and heads off to China, unaware that Rachel soon realizes his feelings for her.

RELATED: 10 Times Ross From Friends Should Have Been Fired

When Ross returns from China, he is more confident than when he left and he also has a new girlfriend, Julie. Ross’ trip to China turned out to be a great thing for him because it helped his character become comfortable with being newly single, while also allowing him to pursue a romantic relationship with Julie.

This moment from the series might seem small, but it helped showcase Ross’ true character to viewers. After the girls overhear the guys planning poker night, they eagerly want to join in. The guys let them and the girls lose horribly. However, after taking lessons from Aunt Iris, the girls are ready for a rematch.

In this episode, Rachel is also hoping to get fired and apply for new jobs and Ross is denying his feelings to the guys. During the poker game, though, Rachel learns that she didn’t get the jobs she applied for. She continues the game with Ross, but Ross lets her win. After he loses, Ross proves to Joey and Chandler that his feelings for Rachel are strong. This moment also shows Ross’ “nice guy” side.

6 When He Gets Hurt By The Hockey Puck – Season 1, Episode 4

At the game, the guys start to have a good time, but when Ross is struck with a flying puck, they rush him to the ER. After spending time at the hospital, Ross admits that his first time with Carol was the first time he was intimate with anyone. This moment adds some comedic relief to Ross’ character, while also helping viewers learn more about his relationship with Carol.

Another big moment Ross had was the realization that he would have to give away Marcel. After his divorce, Ross decides to adopt Marcel, a monkey. Marcel is a stand-in roommate for Ross, since Ross doesn’t want to get a roommate at his age, and he helps Ross not be lonely.

Later in the season, Ross learns that Marcel has reached sexual maturity and he has to give him away. Marcel helped Ross during a dark time in his life, but Ross knows that giving him away is what Marcel needs. Ross’s ability to understand what is best for Marcel and end the relationship in a healthy way shows a lot of character growth, even if it is with a pet monkey.

After recovering from the cat attack, Rachel and Phoebe look for the cat’s owner and end up meeting Paolo, a character who would end up being a low-key villain in the series. Paolo comes back and flirts with Rachel. This moment is important because it allows Ross to be the star of the joke but also shows him that he is still affected by his divorce and needs more time to gain confidence in order to win Rachel.

Ross is known for being a romantic, and that is shown when he gets Rachel a memorable birthday gift. After leaving for China, Ross leaves his gift for Rachel with Chandler. She opens it and is blown away by the brooch inside. Chandler then comments on how when Ross is in love with someone he typically goes all out on gifts, shocking the friend group.

In season 1, Ross is dealing with the loss of his relationship with Carol while also realizing that she is a lesbian and is going to be having his baby. The entire first season is based around Ross coming to terms with his divorce and baby and learning how to be single again after thinking he had found “The One.”

RELATED: 10 Sweetest Friendship Scenes From Friends That Fans Watch Over And Over

Over the course of the first season, Ross overcomes the loss of his marriage with Carol and the prospect of being in her life as she raises their baby with her new partner. The friend group helps Ross find himself again and Ross is able to develop real feelings for Rachel. Ross being able to move on shows how capable he is of change and how much he grew as a person after his divorce.

By far the best moment for Ross is when he becomes a father. The first season of Friends shows Ross overcoming a lot of obstacles and learning how to be himself again, but his ability to come to terms with being a dad ends up changing everything. Ross becoming a dad soon becomes something that defines his personality.

Becoming a dad is one of the most important things to happen to Ross in the series. Not only does Ben change Ross’ personality to be more mature and reliable, but he also helps Ross become more confident. Ben’s birth also helps Ross develop mutual respect and love for Carol’s partner, Susan.

NEXT: Each Main Character From Friends Happiest (& Saddest) Scene


Next
10 Best Band Of Brothers Characters, According To Ranker


Devon Hansen is a writer for Screen Rant. She is a Weber State University graduate with a Bachelor’s degree in English. She has also previously worked with Women’s Republic.

Devon enjoys reading, hiking, and spending time with her son.