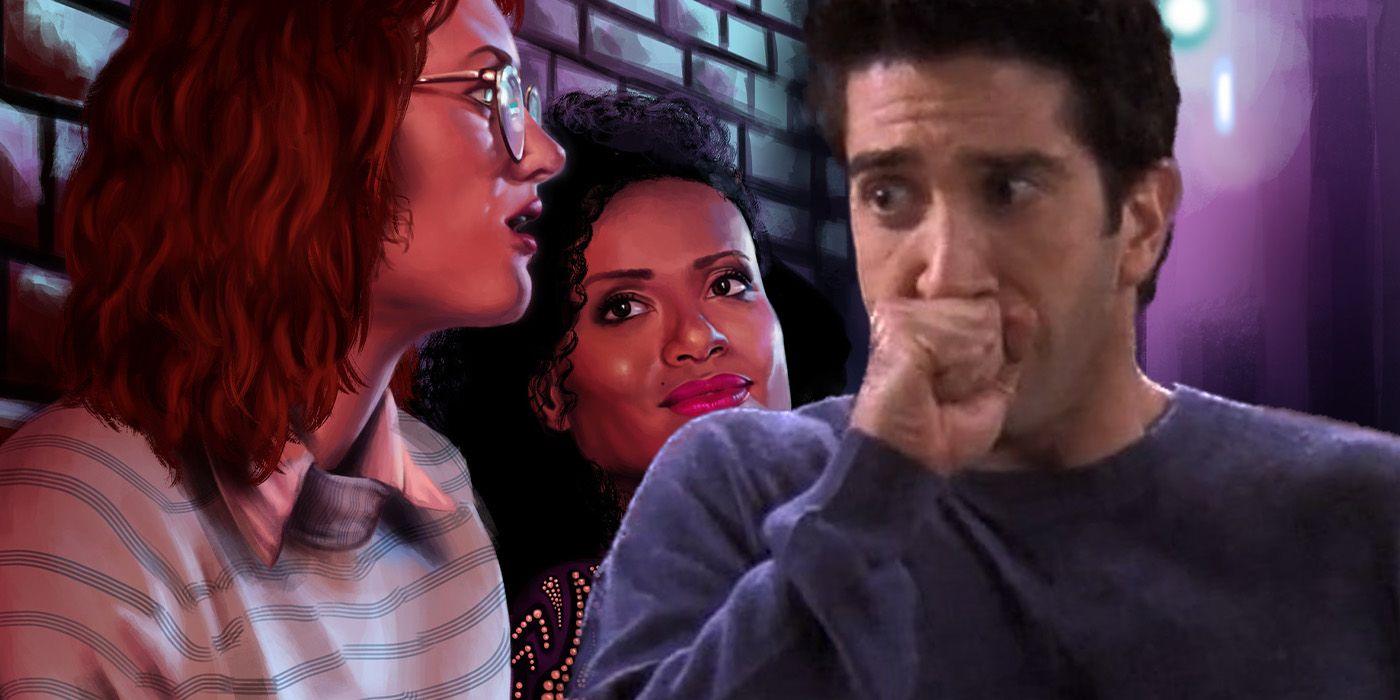 Years before the release of Black Mirror, Ross Geller accurately predicted one of the series’ most beloved stories on Friends. Everyone’s favorite paleontologist, played by David Schwimmer, was well-known for his scientific rambles throughout the decade-long run of Friends, with one in particular coming in season 6, episode 7, “The One Where Phoebe Runs,” wherein Ross explains a theory for the future of computer technology to both Chandler (Matthew Perry) and Janine (guest-star Elle Macpherson). Unbeknownst to him, he might have just inspired a future episode of the hit dystopian anthology series Black Mirror.

The episode in question, Black Mirror season 3, episode 4, “San Junipero,” quickly became a fan-favorite after the series moved from Channel 4 to Netflix in 2016. The story focuses on Gugu Mbatha-Raw’s Kelly and Mackenzie Davis’ Yorkie, who meet each other in the mysterious San Junipero at the height of the 1980s, finding themselves wrapped in a love story that spans decades in the time-jumping beach resort town. One of Black Mirror’s most uplifting episodes, “San Junipero” looked at the positive effects of advancing technology rather than the series’ usual darker tones, even though Black Mirror creator Charlie Brooker stated the episode was inspired by “horror and supernatural fiction.”

Related: Black Mirror’s “Shut Up And Dance” Is Actually The Most Disturbing Episode

It seems that Friends’ own Ross Geller had predicted the plot to “San Junipero” over 15 years before the much-loved episode’s conception. Ross recounts the plot of a book he’s been reading, stating that “by the year 2030, there will be computers that can carry out the same amount of functions as an actual human brain. So, theoretically, you could download your thoughts and memories into this computer, and live forever as a machine.” Even though “The One Where Phoebe Runs” was released in 1999, Ross accurately lays out the core idea behind “San Junipero,” as it’s revealed that the idyllic San Junipero resort is in fact a simulation created inside a database housing hundreds of deceased humans and temporary visitors, their minds uploaded to a computer system.

In an interview with NME, Brooker and Black Mirror co-creator Annabel Jones were asked about a possible connection between the plot of “San Junipero” and Ross Geller’s futuristic idea in Friends. Both denied the idea that that particular episode of Friends had any influence on their production of “San Junipero,” with Brooker stating that “[he doesn’t] think that concept came from Ross from Friends… I’d certainly heard that concept before, so I must have stolen it from elsewhere.” Both Brooker and Jones, however, did joke that most of their episodes of Black Mirror had been inspired by Friends, but even though it’s evident that the pair enjoyed the hit ’90s NBC sitcom, most of the upbeat and feel-good tones of Friends certainly didn’t make their way into the often-harrowing Black Mirror.

While episodes such as “Entire History of You” and “Nosedive” were written by sitcom writers and stars including Jesse Armstrong, Rashida Jones, and Michael Schur, it doesn’t seem that any episodes of Black Mirror were actually inspired by Friends. There’s nothing to say that future episodes of Black Mirror couldn’t feature inspiration from Friends, especially since both Brooker and Jones have expressed their love for the classic show. Even so, it seems Ross Geller’s prediction of Black Mirror’s future back in Friends season 6 was purely coincidental, though perhaps could have been a consequence of genius not being recognized in its time.