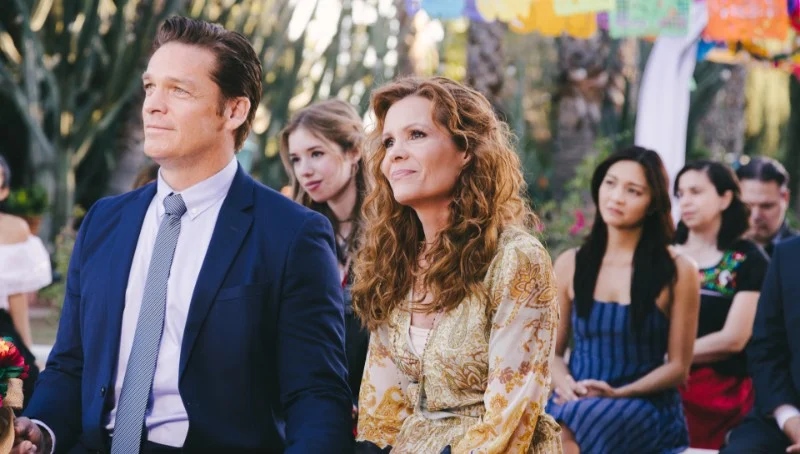 Robyn Lively and Bart Johnson, her husband and frequent co-star, are so photogenic it’s no wonder they’re actors.

Starring in this week’s Pure Flix film “Strong Fathers Strong Daughters,” the channel’s first original movie, they play — no surprise — a happily married couple with a sudden surprising wedding in their immediate future.

“We do work together frequently, Lively, 50, explained in a phone interview. “But the difference with this one and why it’s so special to us is that we’ve never had this many scenes together. We’ve never played a couple ever.

“We’ve worked together. Like ‘Gortimer Gibbons’” — an Amazon family comedy — “I did 40 episodes of that show. I think he did eight and I’m pretty sure we have maybe a line or two to each other over the entire process of the series. So this was a real treat for both of us.”

His “Strong Fathers” dad can’t quite comprehend that all his plans for his brilliant daughter to become a partner in his company are now history as she prepares to marry her Mexican beau before they head to Kenya for three years.

Sound similar to the recent “Father of the Bride” remake?

“My husband and I thought the same as well. We saw a ton of parallels of ‘Father of the Bride’ and this movie,” which is actually  based on a bestselling book of the same title.

Tackling a serious subject like a father learning to let his daughter follow her own path in life and treating it with slapstick silliness is, Lively said, “sometimes the best way to handle tough issues, right? That’s what I’ve learned being a parent anyway.”

Married 22 years with three children, she began her career in Georgia soon after she learned to walk.

“I was raised in a very close-knit family and started working when I was 3 if you can believe it, doing commercials.”

Marriage between two actors has a less than stellar report card in Hollywood.

“The critical element is there’s no competition between the two of us. We’re both rooting for each other.

“Also, in raising children we never have jobs that line up simultaneously. He’s able to hold down the fort when I’m on location and vice versa.”

As for “Strong Fathers,” “We laugh,” Lively said, “because we’ve been prepping to play a couple for 23 years. We hoped we nailed it.”