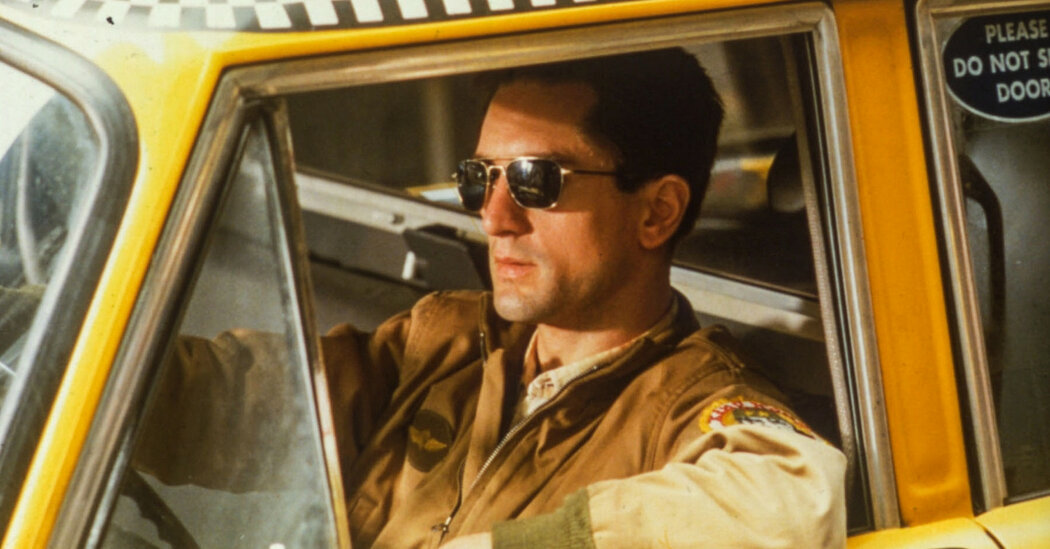 AUSTIN, Texas — When Robert De Niro heard that Marlon Brando’s personal, annotated “Godfather” script was for sale on eBay, he was not too happy. How could such an important cultural artifact, created by an acting icon, a true artist, be as easy to bid on as an old pinball machine, or a Las Vegas coffee mug?

This was around 2006, and De Niro had been looking for a place to donate the extensive collection of props, costumes, scripts, letters and mementos he had accumulated throughout his six-decade career. He did not want his “Taxi Driver” script notes to wind up deteriorating in a stranger’s closet in Des Moines, so he sought out a place where the archivists and staff would care for and preserve each piece, including the red boxing gloves and leopard-print robe he wore as Jake LaMotta in “Raging Bull” and the pages of letters he and his “Last Tycoon” director Elia Kazan wrote each other.

“I wanted to keep it for my kids and I wanted to keep it all together,” De Niro told me just after he viewed an exhibition at the Harry Ransom Center at the University of Texas in Austin showcasing part of his archives. He was in town last month for the show, and for a gala celebrating the Ransom Center’s 65th anniversary. Leonard Maltin served as the master of ceremonies, and Meryl Streep hopped over to Texas to honor her longtime friend and colleague with a speech.

“I don’t know, if you’re spelunking around in there, if you’re going to be able to find the secret of his power and what he does,” Streep said in her speech. “His strength comes from what he doesn’t say.”

Texas might seem like an odd home for De Niro’s two Academy Awards and personal photos, but he wanted an institution that would provide easy access to students, researchers and cinephiles from around the world. As he said in his own speech that night: “I had accumulated an appalling amount of stuff. It was going to be either the Ransom Center or an episode of ‘Hoarders.’”

The center houses the papers of the acting teacher Stella Adler, Samuel Beckett, T.S. Eliot, Tom Stoppard, Tennessee Williams and Frida Kahlo, to name a few. In his speech, De Niro said he chose the center because of the company his archive would be in. “I imagine my papers talking to their papers, or trying to anyway, and their papers asking my papers, ‘What the hell are you doing here?’”

See also  This Was The Last Good Steven Seagal Movie

The “Robert De Niro Papers” show runs through January and features a portion of the 537 boxes, 601 bound volumes and 147 folders of items De Niro donated. Here are a few treasures on display, with insights from De Niro and the curator of film, Steve Wilson.

The black-and-white photo of a very clean-cut-looking young De Niro is accompanied by one of his early acting résumés, back when his film roles had names like Friend of Lead. De Niro said he remembered typing those résumés, and when I asked him if he maybe, possibly exaggerated anything, he said, “I think I may have. Maybe I said I was in a play or had a role in a play, and I’d just done a scene.” Wilson said the résumés helped the archivists date some of the items from early in his career, like his old makeup kit, which holds used brushes, tubes and cosmetic sticks that helped De Niro get into character during his early years as a student, before he went to work onstage and in dinner theater. “The existence of these résumés was really interesting to me,” Wilson said. “It does look like he was probably padding résumés. For example, he might say he was in a touring play, but we know he performed a scene at Stella Adler or something.”

The hat, and the role, marked the start of one of cinema’s most enduring and powerful collaborations, between De Niro and the director Martin Scorsese. When the actor wore this brown fedora to read for the role of Johnny Boy, the neighborhood punk, Scorsese knew De Niro was his guy, he told New York magazine a few years later. In Vincent Canby’s 1973 review of the film for The Times, he wrote, “The look, language and performances are so accurate, so unselfconscious, so directly evocative.” De Niro’s performance (opposite Harvey Keitel, above left, and David Proval) and that now iconic hat helped create the visceral realism that still manages to feel in-your-face and raw, almost five decades later. “I wore that hat as a kid,” De Niro told me when I asked where it came from. “I just liked it.” When it came time to audition for Johnny Boy, he said, he felt that it fit the character. “He had been keeping wardrobe items that he would use for auditions, like hats and glasses, for a long time,” Wilson said. “It was kind of an arsenal.”

To prepare for his 1976 role as Travis Bickle, a haunted, lonely Vietnam veteran turned New York cabby, De Niro spent a little over a week actually driving a taxi. This was just after he had won an Academy Award for “The Godfather Part II,” and one passenger recognized him and commented that things must be especially tough for actors if an Oscar winner was trying to earn money driving a cab. The license is another piece of the collection that illuminates his dedication to character and the lengths he goes to fully inhabit another life.

The exhibition also includes one of De Niro’s annotated “Taxi Driver” scripts, opened to a page where Bickle stares into the mirror. The action simply reads: “His eyes are glazed with introspection. He sees nothing but himself.” Just below that, in blue ink, De Niro wrote, “Mirror thing here?” That “mirror thing,” of course, became “You talking to me?” It’s an improvised moment that has become a hallmark of his career. College-age kids still yell that line to De Niro sometimes when he’s out in public. As for the license, as soon as Wilson saw it for the first time, he “knew immediately that it was the image of the archive. It speaks to his process and says it all. It’s a great piece.”

“I can’t remember if I wore those through the whole production; it was a long time ago,” De Niro said of the ID his character, Mike, wore in Michael Cimino’s 1978 film about a group of friends from a Pennsylvania steel town whose lives are forever scarred by their experiences in Vietnam. Besides the dog tags, the archive displays De Niro’s prep work, including medical records from actual Vietnam veterans, articles about “returning vet syndrome” (now known as PTSD), and detailed notes he took on the dialect of the specific area of Pennsylvania his character hailed from. (Sample: “these ones” and “those ones” can be used interchangeably.)

“I think this is where the archive really starts,” Wilson said. “There is a giant uptick in the amount of research material that we have for any particular film once we get to ‘Deer Hunter’ and beyond. Sometime around 1979 or 1980 is when he really got serious about keeping things.” When the dog tags arrived, Wilson noticed they were covered in plastic, as they would have been in real life to keep the metal from making noise and alerting the enemy. By the time the dog tags reached Austin, the plastic was yellowed and leaching liquid, so the archivists removed the decaying material and had them encased again, to stay true to the object’s original form.

Like most of the screenplays in the collection, De Niro’s “Raging Bull” draft, dated “2-1-79” and revised by “M.S. and R.D.N.” (the director and actor), is covered in handwritten notes. The hefty version is enclosed in a brown leather folder. Wilson said several of the scripts “seemed to have a personality of their own,” and that there were notes in the pockets of the folder, including one to De Niro from Vikki LaMotta, the real-life wife of De Niro’s character.

The script is displayed in a glass case next to the writer Paul Schrader’s handwritten scene outline, scribbled on a yellow legal pad. Several writers were credited in the film, but De Niro and Scorsese went away for a few days together to work on a final draft before production began. De Niro said they headed to the Caribbean because “it just seemed like a nice place to go. We worked on the script and on getting it to a good place. We worked on the character.”

The notes across the script pages are tough to decipher. When De Niro stepped away for a moment, I overheard his young daughter telling Wilson that her father had horrible handwriting, so bad that she didn’t even think he used the same alphabet as everyone else. That hard-to-decipher handwriting will probably not stop film lovers and researchers from traveling to the Ransom Center in their quest to decode De Niro’s career, his technique and the mystery of his process, one script note, costume choice and scribbled-on napkin at a time.