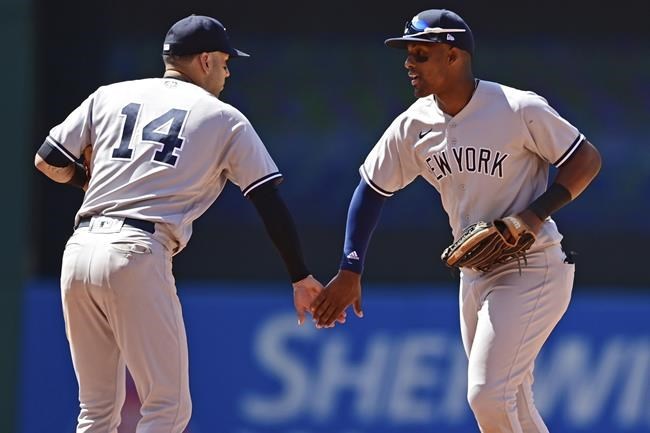 Cortes (7-3) allowed a homer in the first to Amed Rosario and little else. The left-hander gave up one run and three hits and struck out six, including Guardians star José Ramírez three times.

New York’s bullpen took it from there, but it wasn’t smooth.

Michael King squirmed out of a bases-loaded jam in the seventh and worked the eighth. Wandy Peralta also filled the bases in the ninth, forcing manager Aaron Boone to bring in closer Clay Holmes to get pinch-hitter Steven Kwan for the final out and his 15th save.

At 58-21, New York is not only running away with the AL East, but has the second-best record after 79 games of any team in 93 years. Only the 1998 Yankees (59-20) were better, and this version is so far step for step with those World Series champions.

Rizzo and Stanton homered in the fourth off Aaron Civale (2-5), who held the Yankees without a hit the first time through their order. The second time wasn’t nearly as good.

Rizzo and Stanton connected for two-out homers in the fourth. Civale had just gotten Aaron Judge to bounce into a double play before surrendering 841 feet in homers to Rizzo (409) and Stanton (432).

See also  P!NK, Alessia Cara and 13 others we loved on Sunday

It was the 10th time this season the Yankees have hit back-to-back homers. They also did it in the ninth inning of the opener.

Rosario put the Guardians up 1-0 in the second game with his third homer. He drove a fastball from Cortes over the center-field wall, barely out of the reach of a leaping 6-foot-8 Judge.

Carpenter has given the Yankees all they could ask since they signed the 36-year-old in May after the three-time NL All-Star was released as a minor leaguer by Texas.

He’s got eight homers in 41 at-bats and come through every time manager Aaron Boone has called on him.

Carpenter said the chance to play for baseball’s most storied team has lifted him.

“I feel like a little kid every time I put the uniform on,” he said. “The franchise that is just iconic, and I’m just grateful to be able to put it on every day and go out and play.”

Cole (7-2) was tagged for consecutive homers in the second inning by Josh Naylor and Franmil Reyes before settling in. The right-hander allowed Cleveland just one other hit and struck out six.

DJ LeMahieu added a solo shot off rookie Kirk McCarty (0-2) and Jose Trevino homered off Guardians utilityman Ernie Clement in the ninth for the Yankees.

Another humdrum win for the Yankees in the opener did have a hiccup. Reliever Aroldis Chapman’s first major league outing May 22 didn’t go well.

The left-hander, who was activated Friday after being sidelined with Achilles tendinitis, came in for Cole to start the seventh and walked three straight batters before being pulled by Boone after 19 pitches.

“He’s healthy,” Boone said. “He’s got to get out there and not think in terms of throwing the ball but just trusting it and letting it rip and let the results fall where they may. I think he’s just guarding against making sure he doesn’t throw a ball.

“We’ve just got to get him over the hump.”

Yankees: Boone said RHP Ron Marinaccio, who relieved Chapman in the opener, was being checked after complaining of a “little dead arm.” He hasn’t allowed a run and just one hit in 13 consecutive appearances.

Guardians: Rookie OF Oscar Gonzalez was placed on the injured list with an intercostal (rib) strain. He didn’t report any issues until Thursday and an MRI revealed the strain. Gonzalez will be shut down for at leas one week. … RHP James Karinchak (shoulder strain) was activated from the 60-day IL and optioned to Triple-A Columbus. The Guardians were encouraged by two recent outings want him to be consistent.

See also  What to watch, read and listen to this weekend : NPR

Cleveland’s Triston McKenzie (4-6, 4.03 ERA) had better be careful leaving pitches up in the zone against the Yankees. He’s allowed 16 homers in 80 innings. Jordan Montgomery (3-1, 3.27) starts for New York.

Meryl Streep net worth: What is the fortune of the acclaimed actress and Oscar...