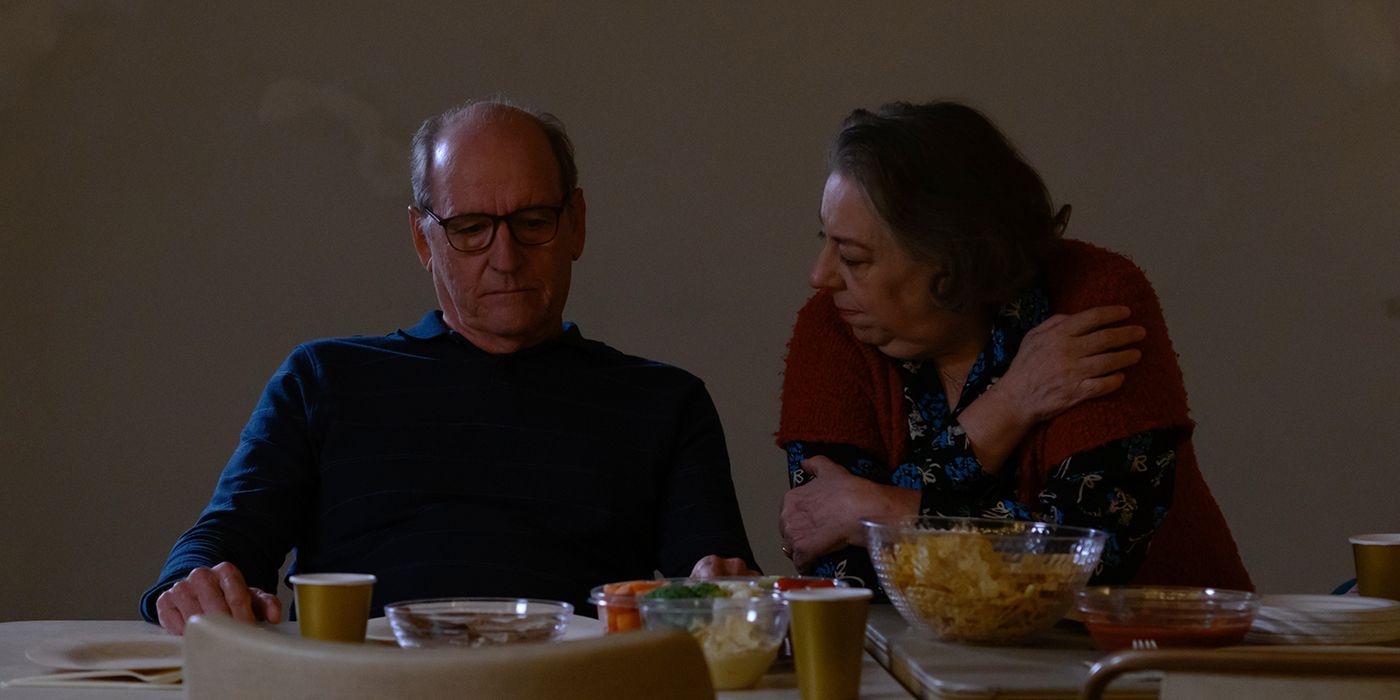 A24’s next film is an adaptation the Tony-award winning play The Humans, which arrives in theaters and on Showtime November 24. Fitting that it premieres just in time for Thanksgiving, as the crux of the story revolves around a family gathering at their youngest daughter’s cramped New York City apartment for a rather unsettling Thanksgiving dinner.

The Humans is Stephen Karam’s directorial debut, but it is far from a straightforward adaptation of his stage play. The impressive cast consists of Richard Jenkins (The Shape of Water) and Jayne Houdyshell (who starred in the original production) as the patriarch and matriarch of the Blake family, June Squibb (Godmothered) as the ailing grandmother, Amy Schumer (I Feel Pretty) and Beanie Feldstein (American Crime Story) and daughters Aimee and Brigid, and Steven Yeun (Minari) as Brigid’s live-in boyfriend Richard. As all six people huddle together to celebrate Brigid and Richard’s new home, the night descends into an almost frightening exploration of depression, anxiety, religion, and all manner of family conflict.

Related: 10 Most Anticipated A24 Films

Jenkins spoke to Screen Rant about stepping into the world of the Blake family, blending director Stephen Karam’s stage and screen visions, and anticipation for his next collaboration with Guillermo Del Toro.

Screen Rant: I know that you had not read the play before you received the opportunity. What was your reaction to the pitch and the script?

Richard Jenkins: My agent, Rhonda Price, who had seen the play many times, talked about it – I always intended to go see it, and I never got around to doing. She called me up and said, “They want you to play Erik in The Humans. And you’re going to do it.” I said, “Well, let me read It first,” and she said, “No. No, you’re doing it.” I read it, and I said, “Yeah, I am doing it.”

It just was the writing. That’s the thing you look at because you read so many scripts. It doesn’t take long, to see if this is special; if this is something I have to be part of. And I really had to be a part of [The Humans]. It didn’t take long.

You have said that Stephen Karam let you find your own way into the character. But he is not only an experienced director, just as you are an experienced actor – this is also his play. And Jayne Houdyshell has also had extensive experience playing your wife Deidre. How did that inform your journey?

Richard Jenkins: It’s terrifying to come in. It’s like you’re the new kid on the block, and it’s intimidating. But they both were open and loving.

See also  Destiny 2: How to Get the Forbearance (& God Rolls)

As Jayne said, this was new for her. The film is so different than the play, and she said, “For me, it’s a new experience.” And she was so good. In rehearsals, I thought, “Jeez, she must think I’m really awful.” But she was very supportive and loving.

And Stephen would ask me a question like, “Why do you take the time there to do that?” He said to me, “I might ask you why you do something once in a while. Or if I don’t believe it, I’ll say that.” That’s the kind of direction that you need, because if you don’t believe it, then you’ve got to figure out a way to make it believable. He was true to his word and let me find who I was and what I did. I’m just grateful they let me do that.

It sounds like you had quite a bit of time to actually rehearse and prepare before filming.

Richard Jenkins: About 8 days. We were sat around a table, and I could not figure out where I was in the apartment around the table. It was confusing, and I said that to Jayne, “The dialogue is so specific.” You start talking over somebody on this word, and you have to get this out of your head if you’re ever gonna do it. And she said, “I went through the same thing when we were rehearsing the play.”

But once I got on my feet in the set, where we rehearsed for two or three days, then it was like, “I know where I am now. They’re in that room, and I’m here talking about this.” That was helpful. I haven’t been on stage for a long time, and it was like doing a play. We were shooting 15 pages at a time.

Even watching it felt like I was naturally following the cast’s actions without a camera.

Richard Jenkins: It’s like somebody is kind of window peeping here, looking around the corner at this family and sometimes just hearing – not even seeing them. Which we do a lot; we hear conversations in other rooms, and they’re serious and scary. We hear them but can’t see the people, and sometimes that’s more terrifying, right.

Stephen knew what he wanted to do when he started this. He’s been thinking about this for a long time. He’s been thinking about this as a movie for a while, and what he could do in a film that he couldn’t do with a play. And there are things that you could do in a play that you can’t do in a movie. It was nice, too, that A24 let him make his movie.

Many times, a film version of a play just feels like a straightforward adaptation. But this is its own thing.

See also  Oscar Wrap Up: National Board of Review Had No Effect on Academy Awards, Ignored “CODA”

Richard Jenkins: Or they open it up to a different location, and they think that’s a movie. It’s not. It’s hard to do. It’s really hard to do. Because usually there’s a lot of dialogue, and films don’t have a lot – some do, but I think about a third of the dialogue is gone from the play to the movie. And it’s a chamber piece. He didn’t open it up; he didn’t take it anywhere. He just used the camera.

It was almost claustrophobic, even from the opening shot traveling up to the apartment. Did you have to lean into the haunted house aspects?

Richard Jenkins: I didn’t pay any attention. I thought that if I did that, it would look like that. I didn’t want to say, “I’m in a horror movie,” because I wasn’t. It’s unbeknownst to me: if I’m startled, I’m startled.

The sounds would just get me, and I’d be like, “Ooh!” You’re somewhere else; you’re thinking about something else. That’s when things startle you, when your head isn’t there. When you’re not there, when you’re in your head, it’s scary.

I love how the movie combines the trope of the religious father who has qualms about how his daughters are living with the pointed question of how he’s living his own life. What was it like exploring those layers of your character?

I mean, we don’t see ourselves. We really don’t see ourselves, and he’s convinced himself that this is the way to go. Anything newfangled, like therapy, he’s like, “Why you do that? Why do you spend all this money on healthy food? If you’re miserable, why do you want to live this long?” And he has a point, but it’s a real dad thing. There’s a lot of dad things in this.

Another dad thing is the dynamic that you build with the would-be son-in-law or the boyfriend. In many ways, Steven’s character Richard is an outsider to the family – and yet you both are connected by the dreams you talk about.

Richard Jenkins: You’d think that would be the last thing, but that dream freaks him out. He goes to Steven Yeun’s character and says, “Can I tell you a little more about what happened? Because they think I’m crazy. I can’t tell them.” Because it bothers him, and he finally understands it.

And Steven’s just so great. We’re hitting that pig, and he just taps it. And he goes, “I don’t know. I’m the first one to go! How would I know?”

As a Guillermo Del Toro fan, I’m very excited to see you work with him again. What can you say about Nightmare Alley?

Richard Jenkins: I saw it last night. It’s fantastic. It’s Guillermo. I love him; I just love it dearly. I’d go anywhere, do whatever he wanted me to do. If you’ve talked to him, you know. He’s just a genius. He’s one of a kind.

I think of Mike Nichols, who I worked with a couple of times. Mike Nichols never repeated himself; he was just that interesting. That’s what Guillermo is like. Guillermo is full of life and full of observations. He takes something from everything he does. The way he cut this movie? You just don’t see that anymore. It’s like an old master who does it his own way. He’s not copying anybody, but the way he frames shots is incredible.

More: In The Heights: Biggest Differences Between Broadway & The Movie

The Humans arrives in theaters and air on Showtime starting November 24.


Tatiana Hullender is a writer at Screen Rant, focusing on film and television, as well as a co-host of several podcasts. In the interviews she conducts for Screen Rant, she seeks to learn what drives each creative mind and how different experiences influence the same narrative. As a graduate of Columbia University in New York City, Tatiana studied theater and comparative literature. She has been passionate about all manner of storytelling since being exposed to Jane Austen and BBC adaptations of her work all at once. But Regency satire of manners isn’t the only genre she loves, as a love of comic books naturally developed into a love of cinematic universes and their superheroes. So long as a story has heart and humor, there’s a chance of finding something to enjoy in the telling of it.
Visit @myrcellasear on Twitter to follow Tatiana’s articles, interviews and podcasts including: The Flash Podcast, Pop A La Carte and Ladies With Gumption. Subscribe to them on the Podcast app, or contact her directly at painted(dot)out(at)gmail.com.