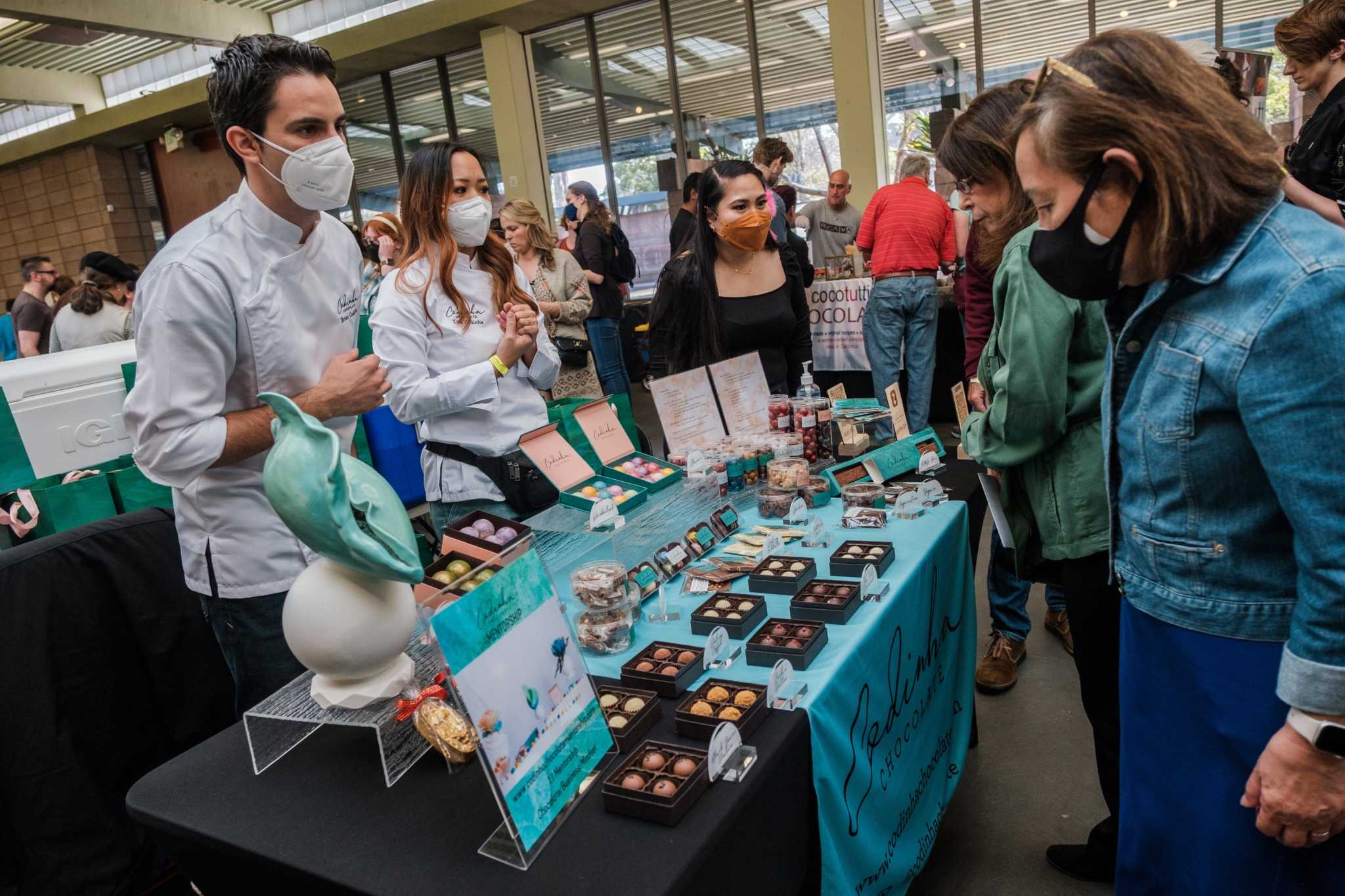 “What brings me here? I’m a chocoholic!” said Eve Schenker of Berkeley, waiting in line with her son Joseph to try the famous Z. Cioccolato fudge made in North Beach.

Schenker, sporting a shirt that said “My superpower is making chocolate disappear” was in just the right place for someone of her tastes — the fourteenth annual San Francisco Chocolate Salon at the San Francisco County Fair Building in Golden Gate Park, back from a two-year pandemic hiatus.

Schenker and her son sampled a few of Z. Cioccolato’s fudge flavors, discussing their favorites — both were fans of the bright green mint variety — before buying a couple of boxes and dropping them into the orange paper bag Joseph was toting for his mother. It was already full of their favorite chocolates of the day.

“And I’m showing restraint!” Schenker said with a laugh.

Eve Schenker pauses with bags of chocolate while attending the Chocolate Salon at the San Francisco County Fair Building in San Francisco on Saturday, April 2, 2022.

Nick Otto/Special to The Chronicle

Over a thousand people bought tickets for the chocolate fair, said Andre K. Crump, the founder of the Chocolate Salon, where they could sample chocolates and candies from dozens of vendors selling everything from truffles to cookie fudge bars to just simple, artisan chocolate bars.

The visitor numbers were below the 2019 turnout, but around the level of 2018, Crump said, a promising start as in-person events slowly ramp up after the pandemic.

For vendors — many of whom are Chocolate Salon veterans — the return of the fair was more than welcome after two years of uncertainty. While most are based in Northern California, chocolatiers came from all parts of California and some even from as far away as Utah.

For many, the fair is not only a way to showcase and talk about their chocolate, but also a major driver of sales.

“I’m living a dream I didn’t even know that I had,” he said between explaining his latest flavor creations to eager customers. 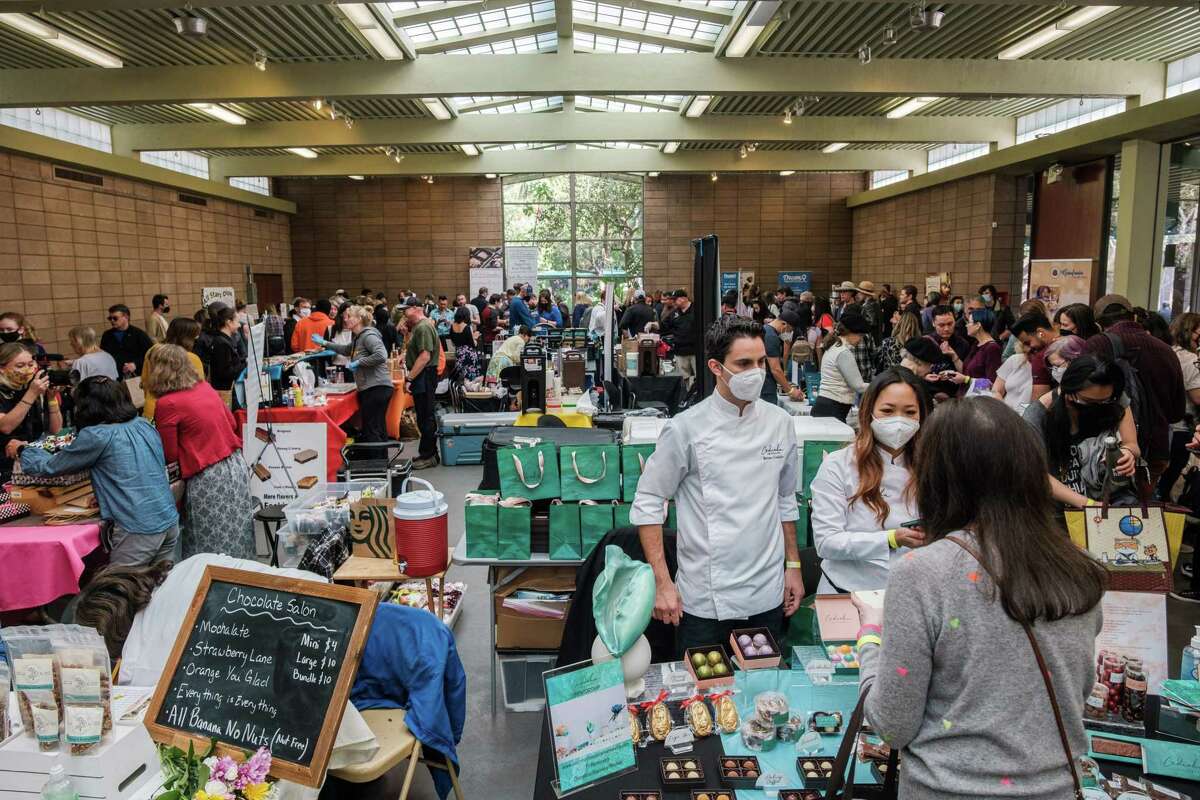 Nick Otto/Special to The Chronicle

Many of the vendors make chocolate as a side gig, using the income from their full-time jobs to fund their chocolate making passion.

Zeila Schapelle started her company, Brigadeiro Sprinkles, after coming to the U.S. from Brazil, where brigadeiros — luscious, creamy fudge balls — are a common and beloved dessert. Schapelle wanted her daughter, who was born in the U.S., to share in that tradition, so she started making them for birthday parties and sharing them with friends.

“So many people don’t know what a brigadeiro is,” she said. “When they try them, they love them.”

After getting so much positive feedback, Schapelle, who works in finance, decided to start making and selling the hand rolled chocolates, which are sometimes hard to find in the U.S. Now she spends her free time experimenting with new flavor combinations to share with her customers.

And chocolatiers weren’t the only ones showcasing their hard work — the fair also featured jam vendors, teas and even cured meats.

John Ginanni, founder of Canteen Meats in San Rafael, was asked to come to the fair as a savory vendor — a balance for the abundance of sugar surrounding him. While he normally sells at farmers markets and online, he was happy to come to the event, driving down from Petaluma this morning.

See also  Which Oilers are most likely to return next season? Who goes?

“It was a last minute decision, but I think it was worth it!” he said, before hopping over to discuss his guanciale — Italian cured pork jowl — with a customer.

And for chocolate enthusiasts, the fair was a welcome moment of celebration after two difficult years.

“I love it,”said Kristy Rogers, who came up from San Jose with her mom, Denise, to indulge in the treats and chat with the vendors. “I look forward to it every year.”

Grading Myself: An Update on Who in the West Can Stop the Bucks?

Ruben Randall - March 16, 2022 0
TV/Movies
After 26 seasons, The Bachelor had its fair share of lackluster male leads who left Bachelor Nation viewers and their cast of women feeling heartbroken,...