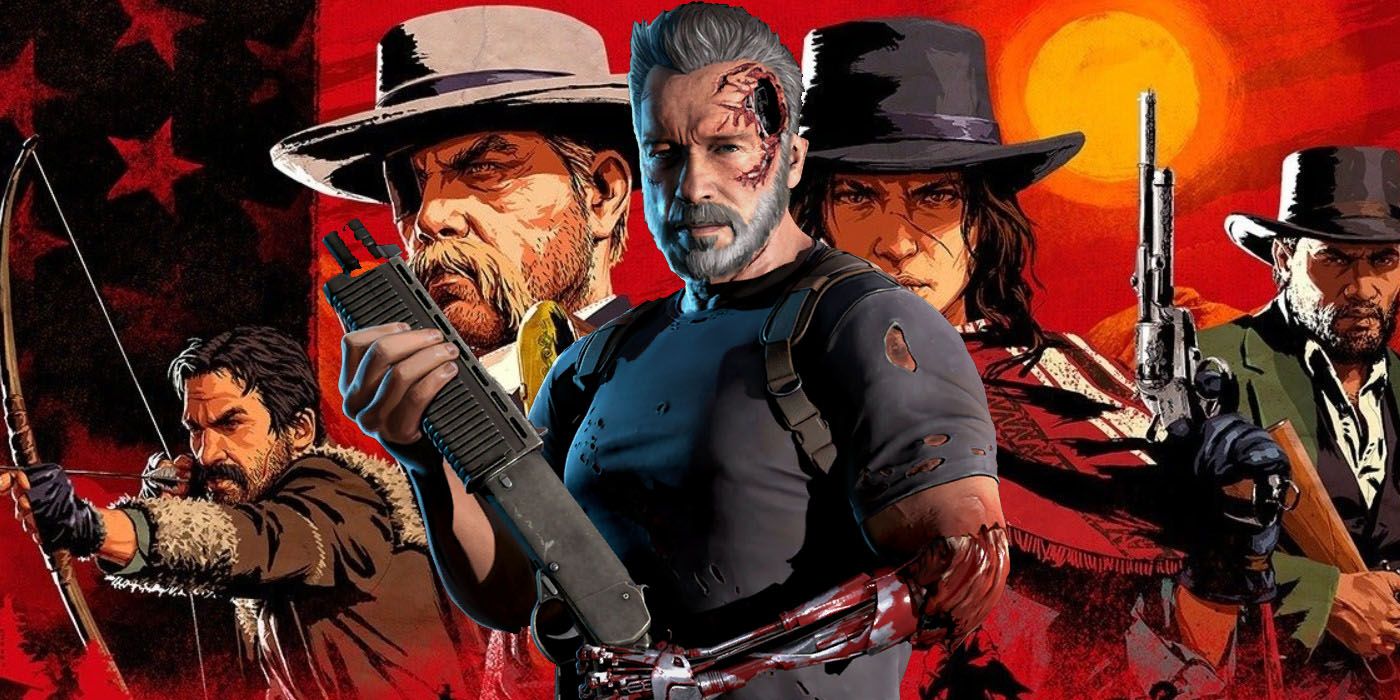 One Red Dead Online player brings the Terminator to the Old West by creating an in-game version of legendary action star Arnold Schwarzenegger.

The Terminator has come to the old west thanks to one player recreating Arnold Schwarzenegger in Red Dead Online. The legendary body-builder, action movie star, and former Governor of California has made plenty of official video game appearances, often tying into his most famous films. One such example was his appearance as Dutch in DLC for 2020’s Predator: Hunting Grounds, which expanded on the troubled mercenary’s backstory from before his faithful battle with the titular alien warrior. Other gaming cameos from Schwarzenegger include surprise DLC appearances as the T-800 Terminator in WWE 2K16 and 2019’s Mortal Kombat 11, where the killer machine traded blows with wrestlers and even had a dream match against Silvester Stallone’s Rambo.

One video game that Arnold Schwarzenegger hasn’t appeared in is Red Dead Redemption 2, an open-world western epic that has received near-universal acclaim when it launched back in 2018. Just like Rockstar Games’ other massively successful open-world title, Grand Theft Auto 5, Red Dead Redemption 2 received an online MMO spin-off that allowed players to build their own custom character and roam the vast, untamed landscape of the American south in the late 1800s. Some Red Dead Online players have naturally used the game’s character creation suite to make Wild West versions of celebrities and fictional characters, including rapper 50 Cent and Boba Fett from the Star Wars franchise.

Reddit user dennymcclane has recently added Arnold Schwarzenegger to the list of famous people appearing in Red Dead Online, sharing several screenshots of their custom-made version of the legendary movie star to r/gaming yesterday. Sure enough, Arnold Schwarzenegger’s classic haircut and strongman physique are captured quite well in dennymcclane’s Red Dead Online character model, causing users in the comment section to make jokes about some of the actor’s most meme-worthy lines from the Terminator and Predator films and even wonder how a Terminator prequel set in the Old West would play out.

While Red Dead Online started strong when it first launched in 2019, Rocksteady hasn’t given it the same level of support that it has for Grand Theft Auto Online over the past couple of years due to other projects like the recent Grand Theft Auto Trilogy: Definitive Edition. This has caused players to form the #SaveRedDeadOnline protests earlier this year to demand that Rockstar add new content to the game, though the announcement that Rockstar is currently working on the long-awaited Grand Theft Auto 6 and Red Dead Online’s shrinking player base many further complicate things.

Despite this, there are still plenty of fans enjoying the large western world of Red Dead Online, including those that like to play as existing characters and real-life celebrities. While Red Dead Online’s version of Arnold Schwarzenegger probably isn’t as invincible as the makeshift Terminator players have encountered in Grand Theft Auto Online, it might be wise for other outlaws to avoid starting trouble with the iconic action hero while roaming Rocksteady’s wild west online sandbox.

Next: Red Dead Online 2022 Updates That Would Save It


J. Brodie Shirey is just a simple man trying to make his way in the universe, but aren’t we all? He currently lives in York, Pennsylvania. He is a big comic book, video game, and science fiction fan, and likes writing articles for ScreenRant or scripts for some of his crazy TV show ideas.

A graduate from York County School of Technology, he’s self-published several books on Amazon, and once won 1st place at a regional computer fair for a CGI animated short. He might post it on Youtube someday. He hopes that working for this site will be his first step into the larger universe of online writing, since Megazord technology hasn’t been invented yet and he doesn’t seem to have any Force powers. You can check out his work at The Uncanny Fox, purchase his books on Amazon.com, see his posted scripts on Script Revolution, or see his portfolio here or here. He can also be followed on Twitter @FoxUncanny.

Seo In Guk and Oh Yeon Seo CONFIRMED to star in...