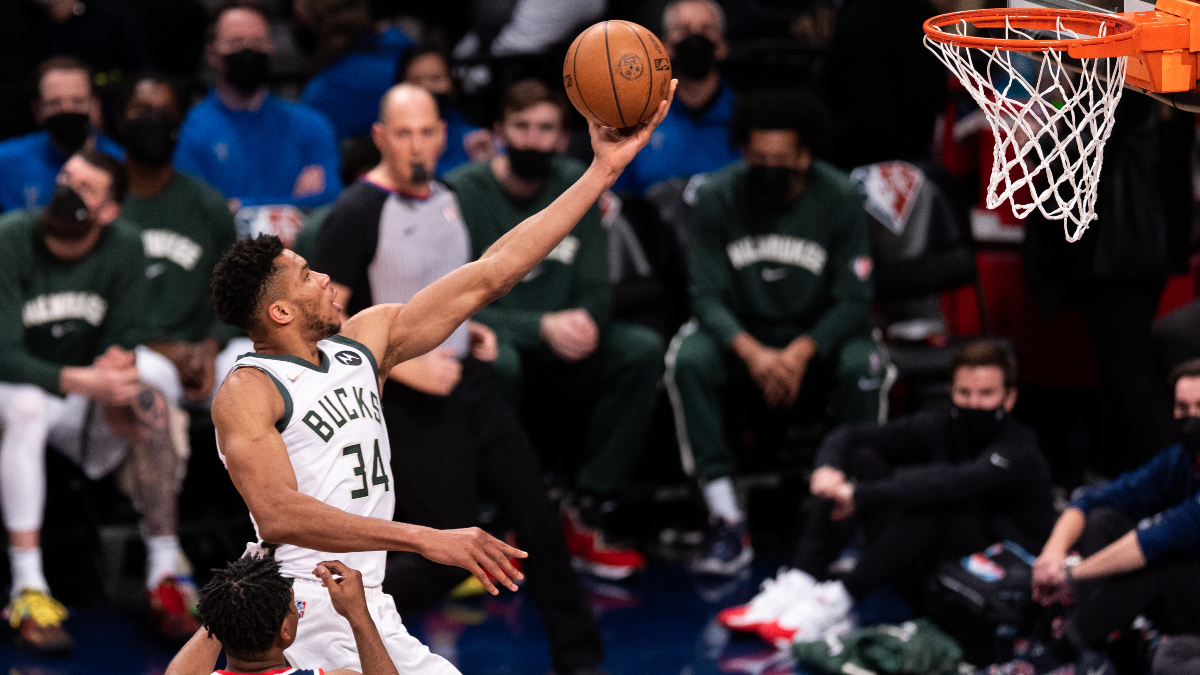 The Brooklyn Nets will travel to Milwaukee to take on the Bucks in an Eastern Conference showdown on Saturday night.

The Nets did not come out of the All-Star break on a high note, losing to the Celtics by 23 points on Thursday. Losses like that are something Brooklyn simply can not afford at this stage of the season, as the Nets are in eighth place in the Eastern Conference.

Meanwhile, this will be the first game post All-Star break for the Milwaukee as the Bucks look to continue their rise in the standings in a competitive Eastern Conference.

Both teams will likely have some absences in this one, most notably Kevin Durant and Ben Simmons. Can the Nets battle through their absences and steal a win on the road, or will we see the same Nets team that was dominated on Thursday night?

The phrase “fallen off a cliff” is often overused in sports, but there’s no other way to explain what has happened to the Nets over the past month. On Jan. 22, they had a half-game lead over the Chicago Bulls and Miami Heat. Since then they are 2-13 and have suffered four losses of 20-points or more.

Missing Kevin Durant, trading James Harden for a currently inactive Ben Simmons at the deadline and Kyrie Irving being unavailable to play games in New York haven’t helped either. Irving will be available for Saturday’s game, which should help, but there’s a reason the spread in this game is nearing double-digits.

See also  What Is Mary J. Blige’s Net Worth? She Won’t Be Paid For The Super Bowl Halftime Show

The Nets have been near the bottom of the league defensively, even in the games that Irving has been available to play. Since Irving’s first game back, the Nets are allowing 118.3 points per 100 on the road, according to NBA Advanced Stats. That certainly can’t be tied entirely to Irving. The Nets allow 115.1 points per 100 and have a 0.1 Net Rating when he’s on the floor compared to 121.7 points allowed per 100 with a -9.4 Net Rating when he’s off the court.

Still, the results have been dismal, and the Nets are flirting with staying in the play-in range based on the way they look right now.

As good as the Bucks have been this season, they haven’t been as dominant as they were in seasons past where they just ripped through the entire league. The Bucks rank ninth in Net Rating (+3.2) this season after finishing in the top five for three straight seasons.

Of course, winning a championship in a season in which the NBA Finals was played in late July is certainly a factor. The Bucks haven’t had their foot on the gas, and they are still in the hunt for the top seed in the Eastern conference.

In their most recent stretch before the break, their defense was slipping considerably. They allowed 117.1 points per 100 possessions in their non-garbage time minutes over the past two weeks, per Cleaning the Glass. Their spread differential over that span was -13.8, which ranked 29th in the NBA.

For the season, the Bucks haven’t been a team worth betting with a spread as high as tonight’s. In games where the line closed at 9.5 or higher, the Bucks are just 7-8 ATS, according to Bet Labs. They’ve actually been the second-least profitable team against opponents above .500 with a 10-19 record in that spot this season.

The Bucks haven’t played basketball in nine days, which means they should be well rested for this matchup. But they know they can cruise to a win here with minimal effort based on the way the Nets look currently, and that could be evident in their play tonight.

I expect Irving and the Nets to come out with energy after the break and could see them pushing to make a game of this, but I don’t know that I trust either team enough to play the spread in this matchup. Instead, I’m looking at the over/under.

This total is high, no doubt, but it’s not one that has been insurmountable this season. The over in those matchups is 15-8 this season and and 3-1 in Nets games.

The Bucks have been playing at the second-fastest Pace in the league over the past two weeks, which coincides with their recent stretch of poor defense.

This total opened at 234, so most of the value on the over is lost. At 236.5, I think the over is still worth a play, but I wouldn’t go any higher than that number. Be sure to find the best line using our NBA odds page.

How would you rate this article?

Who is TikTok’s Kyle Thomas and what is his net worth?

Steve Martin, Martin Short and Selena Gomez Return for ‘Only Murders in the Building’

Ruben Randall - September 27, 2021 0
Actress
Lucifer is heading towards its sixth and final season with fans going back through the show in preparation for the launch.| TV &...

Internet reacts as Elon Musk is no longer the richest man...