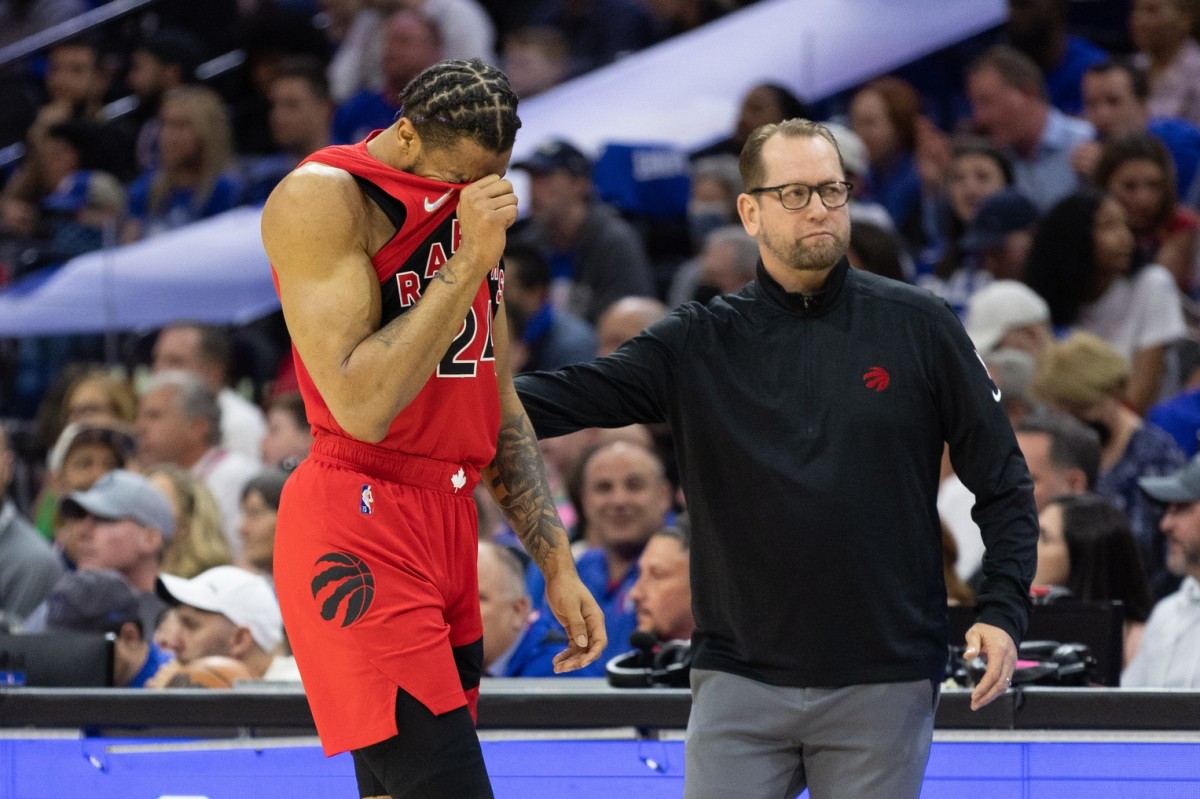 The Toronto Raptors may be changing the way basketball is played with their hyper-versatile roster, but the founding principles of offense in the league remain the same.

2) The best shots come right at the rim

For years, this was what Raptors basketball was all about. Their shot selection ranked among the league’s most efficient, with the vast majority of their shots either coming behind the arc or at the rim. Then, this year, everything changed.

Not only did Toronto’s offense rank 25th in the league in shots either at the rim or behind the arc, but the quality of all the Raptors’ shots was among the worst in the league, according to Shot Quality data. Couple inefficient shot selection with inconsistent shooters, and it’s not hard to see why Toronto ranked 25th in the league in both field goal percentage and points per offensive play this past season.

Next year that can’t stay the same.

Toronto knows that. It’s why the front office has made it a top priority heading into the offseason. Yes, the Raptors still want to add more versatile two-way wings, as Raptors president and vice-chairman Masai Ujiri said, you can never have enough players like Pascal Siakam, OG Anunoby, and Precious Achiuwa. However, a few two-way players who can nail catch-and-shoot three-pointers or attack the rim wouldn’t hurt.

“I would say that the shot spectrum has veered off a little bit from what we normally talk about and, I’ll be honest with you, it’s probably a little further away from what I would maybe textbook or philosophically want,” Raptors coach Nick Nurse acknowledged. “I would say we probably look towards managing that now that we know what we have, managing that a little back closer to philosophically what we believe.”

Some of that improvement for the Raptors will certainly come from development as Achuwa develops into both a catch-and-shoot threat and a rim runner. Gary Trent Jr. became a more well-rounded scorer this past year by improving his catch-and-shoot mechanics. Improved health from OG Anunoby would help that too. But outside the organization additions will be required.

“I think that probably lifts a little bit of pressure for guys like Fred (VanVleet) and Gary, OG, those guys that could get more open corner looks because of the pressure being put on the rim on the weak side,” said Raptors coach Nick Nurse on the topic of adding a lob threat to a Raptors team that ranked 24th in the league in field goals in the restricted area.

The Raptors don’t have a ton of flexibility to add this summer. They have their mid-level exception worth $10.2 million annually over four years they can use all on one player or spread out across multiple. A trade is possible, though unlikely for a big impact player without blowing up the core. Ultimately, the changes will be on the periphery.

Players like Tyus Jones could pique Toronto’s interest, though he will likely be priced out of the Raptors’ range. Pat Connaughton and Bryn Forbes are both heading into free agency and ranked among the league’s best catch-and-shoot scorers this past season. Robin Lopez shouldn’t command too much of Toronto’s mid-level exception should the Raptors opt to add one more traditional big to the roster.

Toronto’s track record with its mid-level exception hasn’t been pretty in recent years. The organization has used it to ink Patrick McCaw, Rondae Hollis-Jefferson, Aron Baynes, Alex Len, and, most recently, Khem Birch to multi-year deals. This summer is too important for free agent mistakes to happen again.

Nurse has made it clear his roster is going to need more depth next summer and the Raptors are going to need to fill out the bench carefully, adding a little more offensive efficiency to the back end of the roster.

Can the Raptors be all about size and versatility with Fred VanVleet on the roster? Masai Ujiri explains why it works

Kanye West makes $1.35million in 12 HOURS after announcing Donda 2 will only be...

Ruben Randall - February 20, 2022 0
Actor
Dave Franco, during his recent appearance on The Late Late Show with James Corden, recalled his proposal to his wife Alison Brie as...