Connections to people from all walks of life can launch careers — or enhance them at any stage — especially in long-term care.

Once established in your career, she advised, adopt a little kindness to those still climbing the ladder, and “don’t eat your young.”

Will shared insights and rich professional advice during her acceptance speech Thursday night at the sold-out McKnight’s Women of Distinction ceremony in Chicago (details below). She continued the next morning as lead-off speaker at the affiliated McKnight’s Forum, which also was held at the historic W Chicago – City Center hotel.

Will traced her colorful career path in senior care and living during her Forum session, which was titled “More lessons learned along the way.”

What really launched her

The biggest lessons Will learned, she said “as a totally inexperienced female in senior housing, and a female with not enough net worth to carry myself,” was to rely on people from other walks of life who knew her professionally.

“The connectivity we have with people who know you, who can relate to you, who know your accomplishments from other walks of life — that’s what really launched me,” she said.

Will emphasized the senior housing and care sector is special for women. The vast majority of residents, patients and workers continue to be women, while daughters and daughter-in-laws traditionally most often bring loved ones into communities. Women also understand resident needs in the most intimate ways, she added.

“We have a tremendous competitive advantage, ladies,” Will said to the female attendees in the mixed audience. “I think this is an industry that lends itself to female leadership.”

Cultivating, growing and retaining the workforce is, of course, the greatest challenge facing the industry, the veteran CEO noted. She pointed out that the stalwart employees who showed up during the pandemic under unimaginable circumstances are now exhausted due to worker shortages.

Leaders need to acknowledge that exhaustion. They also need to expand efforts to recruit workers from other industries and modify immigration policy, Will said. In order to help worker retention efforts, she drew hearty, knowing laughs when she earnestly urged industry veterans to be a little kinder to their younger counterparts and “not eat their young.”

As to workers struggling to balance their professional and personal lives, Will added, “It’s incumbent upon us as leaders to put ourselves back in the shoes where we were once upon a time and help people with their logistics. It wasn’t easy then, and it’s not easy now.” 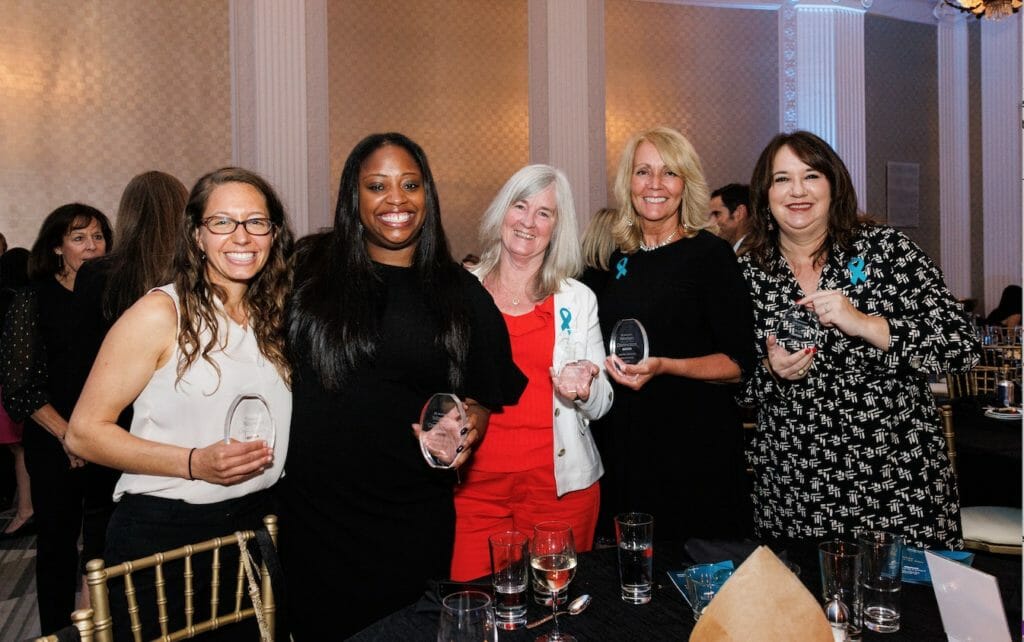 Five Women of Distinction honorees display their awards and their smiles after the sold-out ceremony at the historic W Chicago hotel.

Commitment, drive and integrity are the most important traits to look for in potential employees, she explained in direct response to an audience question.

“With those ingredients you can do a lot,” she noted, adding that it also is important for companies to invest in training and provide new opportunities to employees who express a curiosity for other aspects of the businesses.

Will said she would encourage anyone looking for inner satisfaction and a need to serve to jump into seniors housing and care. She said that, because of the inherent teamwork, she would make the same career choice again “even after the pandemic.”

Will explained that her personal experiences in family caregiving, combined with her professional ideas, led to a second career in senior living. She dove in when she was already in her 40s, having already enjoyed a career as a financier and medical real estate developer.

In the 1990s, her mother-in-law was in the early stage of what later was determined to be Alzheimer’s disease. Her condition was misdiagnosed several times, often leading to stays in a psychiatric facility. 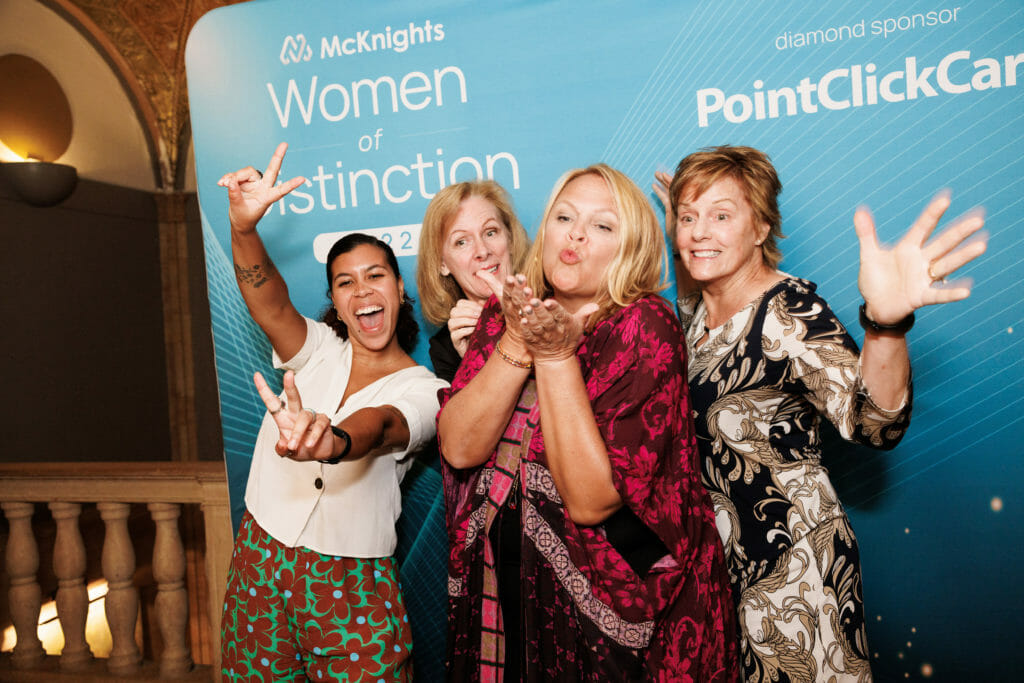 It was a festive atmosphere when guests gathered for the 4th annual Women of Distinction awards ceremony and dinner in downtown Chicago on Thursday.

Will and her husband committed to finding a home caregiver and bringing her in-laws into their home, which led to new challenges and revelations.

“I thought, ‘I can probably make something better,’” she said, calling her decision to pursue her own path in senior living a “lightbulb moment.”

She built Belmont around fostering cognition — every community has a dedicated neighborhood for secure memory care, and its assisted living communities have programs for those with mild cognitive impairment.

A Harvard Business School graduate with distinction, she said she began a career as an entrepreneur because she couldn’t get on the interview list for companies that recruited from her business school.

She joked that when she launched her first senior living community, she took on $15 million worth of debt and offered her building and her two sons as collateral. Then she walked to the parking lot and “cried my heart out” due to fear. The business grew in time and she has since become one of the most heralded of her generation.

Thursday night’s Women of Distinction awards dinner welcomed guests from coast to coast. Honored were the fourth class of Hall of Honor inductees and Rising Stars as well as the second class of Veteran VIPs. The newest category, the McKnight’s Spirit Awards, paid tribute to acts of bravery, courage and determination. 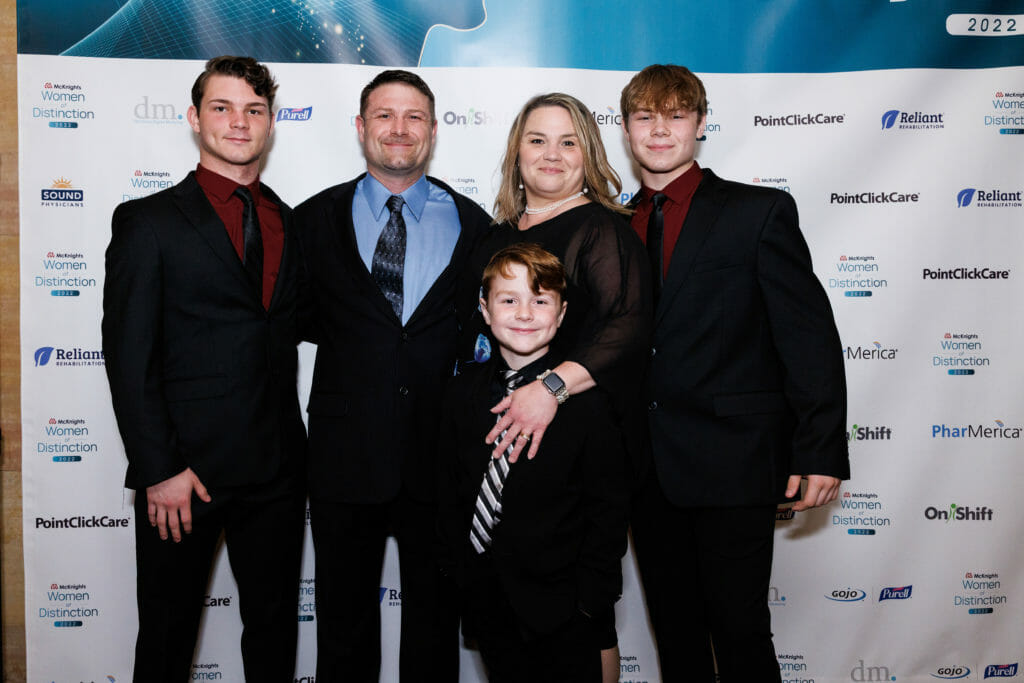 Family, friends and colleagues joined in the celebration at the 4th annual Women of Distinction awards ceremony on May 12 in Chicago. Veteran VIP honoree Liz Dauch, of Stonerise Healthcare, enjoyed the support of her husband and three sons, among others.

In addition, Travis Palmquist, senior vice president and general manager of senior care at McKnight’s Women of Distinction Platinum sponsor PointClickCare, introduced Will, saying that she made her mark by ensuring that “getting older wasn’t the end of the road, but a new opportunity.”

Award winners amped up the energy in the room, with many receiving standing ovations from parts of the crowd, when announced. Each winner approached the trophy table with a walk-up song she had personally picked, further enlivening the atmosphere. Choices ranged from Bill Withers’  “Lean on Me,” to Alicia Keys’ “Girl on Fire,” the Bee Gees’ “Staying Alive,” Sister Sledge’s “We Are Family” and a selection of songs from Beyoncé, among others.

Full details on the program, including a winners’ headshot gallery, can be found at the event website, mcknightswomenofdistinction.com. See this newsletter for ongoing coverage of the forum and awards.

Organizers noted that nominations for the 2023 Women of Distinction awards program will kick off again in December for an approximate month-long period.

PointClickCare is the Diamond sponsor of this year’s event. OnShift and PharMerica are the Silver sponsors. The Bronze sponsor is Reliant Rehabilitation. Table sponsors include Dreamscape, Gojo/Purell and Sound Physicians.

Ruben Randall - August 12, 2022 0
Actor
Arnold Schwarzenegger has had many partners throughout his life. At this point, he is dating Heather Milligan. The two have been together for...