CODA was the surprise winner of the marquee Darryl F. Zanuck Award for Outstanding Producer of Theatrical Motion Pictures at the 33rd annual Producers Guild Awards, which were handed out tonight at the Fairmont Century Plaza Hotel in Los Angeles.

“It’s incredible,” CODA producer Philippe Rousselet said, accepting the award with his fellow producers Fabrice Gianfermi and Patrick Wachsberger. “It really means so much coming from our peers. I think we will all agree a good movie always starts with a good story … and in a world where we see the lack [of humanity] every day, I’ll take this award as a sign there there is still hope.”

The Apple Original Films pic about the hearing daughter of a deaf couple upset awards-season juggernaut The Power of the Dog — and might have repositioned itself as the front-runner for the Best Picture Academy Award. It also made history as the first streaming film to win this award at the PGAs.

Basically, a win tonight for any Best Pic nominee other than Power of the Dog potentially — especially CODA, which is hot off its SAG Awards triumph last month — tweaks the Oscar Best Picture race. Here’s why.

The PGAs traditionally are the first guild awards show of the season, and this year it initially was set for February 26 — the night before the SAG Awards. But the Omicron surge forced postponement of the ceremony to tonight, and as a result, this is the first time the Producers Guild Awards will be held during final Oscar voting.

That’s particularly important because the PGA Awards generally follow in lock-step with the Academy of Motion Picture Arts and Sciences. This show also had 10 nominees for Best Picture and used the same ranked-choice system as the Oscars does for Best Picture only — meaning that voters must list their choices from 1 being “favorite” to 10 being “least favorite.” Thus, the PGA is the group most likely to get a similar choice as the Oscars for Best Picture.

In fact, the PGA prize has predicted the Oscar Best Picture winner a staggering 22 out of the past 32 years. And since 2009, only three films didn’t line up with both PGA and Oscar: The Big Short, La La Land and 1917.

Elsewhere on the film front, Summer of Soul, from the Onyx Collective, Searachlight and Hulu, won for Outstanding Producer of Documentary Motion Pictures, and Encanto took the Animated prize.

‘Ted Lasso’ Season 3 Will Have “A Bunch Of Surprises, Some Curveballs”: PGA Awards 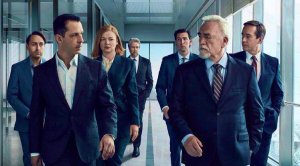 Two Rock and Roll Hall of Fame acts were the subjects of the other TV prizes tonight. Disney+’s The Beatles: Get Back won the prize for Outstanding Producer of Nonfiction Television, and Tom Petty: Somewhere You Feel Free — The Making of Wildflowers took the trophy for Televised or Streamed Motion Pictures.

Newly minted nonagenarian and EGOT-winning actress Rita Moreno received the Stanley Kramer Award, which goes to a production, producer or other individuals “whose achievement or contribution illuminates and raises public awareness of important social issues.”

She did not disappoint in her acceptance speech. 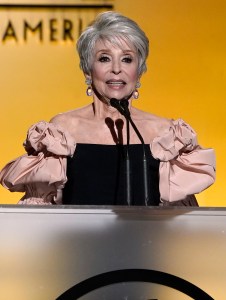 Moreno began by noting how she was there – at the invitation of Harry Belafonte – when Dr. Martin Luther King Jr. gave his historic “I Have a Dream” speech. “In seasons when prophets fall silent and statesmen wane, thankfullyfilmmakers keep on preaching,” she said from the stage. “They never stop advocating for matters of equity and justice.”

Moreno added: “We are in the throes of yet another awards season, and some in our tribe have been known to use the spotlight to advocate for issues addressed in their nominated works – climate change, universal health care, voting rights and LQBTQ advocacy and many others. And I know that, for some audiences, they have been known to create, how shall I say, a mild discomfort. For others, heart palpitations. After all, who does these actors, these Hollywood types, think they are – citizens? Well, f*ck ‘em.” 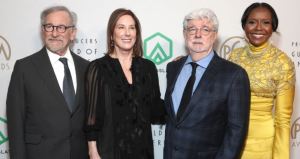 “Steven, George and I met at the dawning of new age in motion picture history, and we worked side by side through one revolution in our industry after another,” said Kennedy, the producer whose films have amassed 120 Oscar nominations. “Revolutions not only in the means of moviemaking, and in the ways movies reach audiences, but also in the composition of our business.”

She added, “As women, artists of color, LGBTQ and differently labeled artists and producers, who have fought for and won a place at the table, propelling our community toward more inclusive, diverse, richer, more sophisticated and nuanced sense of responsibilities for social, racial and economic justice.” 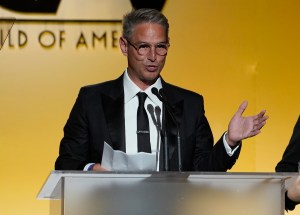 “I think you have to understand what it was like to be ‘other’ in the ’70s or the early ’80s,” Berlanti said in his speech. “I was a deeply closeted gay kid, and the kind of vitriol we’re seeing now so openly by members of the Florida Legislature or by the governor of Texas about trans kids or gender non-conforming young people and their families, there was was that kind of homophobia, overt and casual in almost every corner or every room. And if the hate was flagrant, the representation on TV was almost non-existent.”

Here are the winners at the 2022 PGA Awards:

Award for Outstanding Producer of Documentary Motion Pictures
Summer of Soul (… or, When the Revolution Could Not Be Televised)

Award for Outstanding Producer of Nonfiction Television
The Beatles: Get Back (Season 1)

Award for Outstanding Producer of Televised or Streamed Motion Pictures
Tom Petty: Somewhere You Feel Free — The Making of Wildflowers

Ruben Randall - June 20, 2022 0
Actor
Perhaps early in his life, Arnold Schwarzenegger realized that dreams don’t work until you do. However, being able to enjoy every step of...